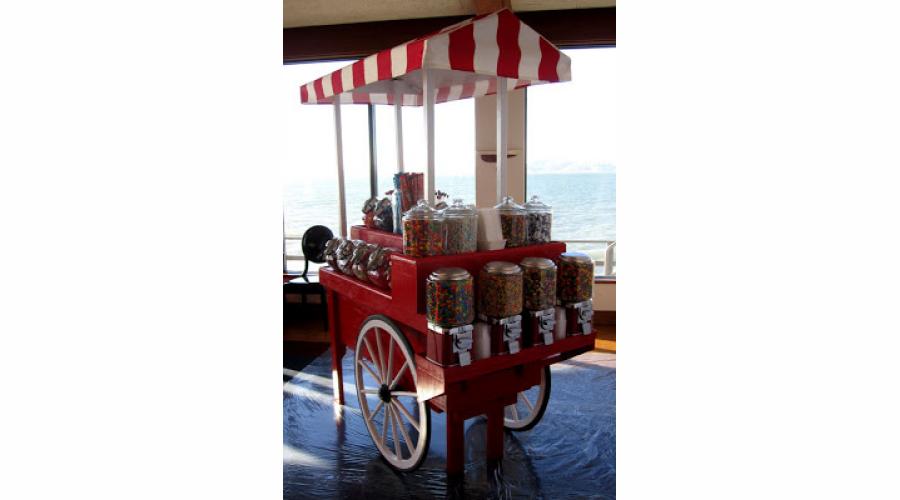 I’ve been doing this party thing for a long time, and I’ve been through just about every disaster you can imagine: employees who don’t show up, traffic, power failures, outdoor parties deluged by rain, wind so strong it stung the eyes -- you name it! Fortunately, it’s working through these harrowing experiences that make for good stories later on...

That brings me to the tale of The Crashing Candy Cart.

We were doing a Bat Mitzvah for a sweet, gentle young girl. She had very specific ideas about what she wanted for her party, and the one thing that she was very focused on was an old-fashioned candy cart. Now, I’ve always thought to myself that it would be fun to have one of those carts. We didn’t own one, and since I’m me and I always have to make things more challenging than they have to be, I decided we would make one. Now, when I say “we” I actually mean Stephen, my warehouse manager. I figured out the general look of the thing, and he turned my idea into a reality.

We were all very excited about the cart. It would have eight gumball machines, four of which would protrude on a cantilever shelf, 30 jars of candy, and a striped awning. It would be candy apple red, have giant white wheels and a push handle.

We actually had to order the wheels and axle from my husband’s old stomping grounds: Lancaster, PA. We bought them from an Amish vendor there who makes wheels for buggies and carriages! How cool is that? The handmade wooden wheels were amazing and really made the piece look unique and authentic. It took about two weeks to build, but when it was done, we were all so amazingly proud.

On the night of the Bat Mitzvah, we decided to do what we call a “reveal.” That is to say, the candy cart would make a grand entrance. It was mostly because everything on the candy cart was, well, candy -- pure sugar! -- and we wanted the kids to eat something before they had a chance to attack the cart. We were working at The Officer’s Club in the Presido, which is the perfect place for a reveal because there are large swinging kitchen doors right off of the main room. Looking back, this was probably our biggest mistake: thinking we could move this sucker.

We were in the kitchen, and everything was going as planned. Our thought had been to load the cart with everything but the cantilever gumball machines; those we would put in place when we got out on the main floor and had placed the stabilizer leg. Somehow this was lost in translation, and a fellow who was actually there to man the photo booth, but was trying to be helpful, placed the gumball machines on the shelf just as I was opening the doors to allow the cart through. Without the stabilizer the cart became a catapult. The result was instantaneous.

Yep, all of this came crashing down

I had my back to the cart as I was opening the doors, but people who witnessed the fiasco say that my husband Scott, who was pushing the cart, was lifted into the air by the sudden tipping. Much like Laurel and Hardy on a playground see-saw, the front end of the cart with the gumball machines came crashing to the floor. All I heard was an enormous shattering sound, which I can only equate to the sound one must hear if you’re in a china store during an earthquake. It was like a sonic boom! I whipped around to see my beautiful cart face-planted on the kitchen tiles, wheels spinning, push handle facing the ceiling, and a sea of broken glass and candy everywhere. I began to hyperventilate.

It took me about thirty seconds to recover. I was just so shocked by what had transpired -- but then I switched into battle mode. The floor looked like some crazy mosaic tile explosion of colors and shapes... There was literally an inch of candy on the floor... And little round jawbreakers were making a rapid escape down the incline of the tile grooves... I would bet to this day that they’re still finding M&Ms and Skittles in that kitchen! I imagine the mice that live there all ended up in diabetic comas that night, much like Templeton the Rat at the fair.

Quickly, I instructed my staff to leap into action. We needed to assess the situation -- I needed a damage report, stat!

Kevin ran to get the broom and dustpan, while the other team members picked up the broken gumball machines. We were blessed on this one: the cart was primarily set up to be a “Sandy Candy” cart. Sandy Candy is sort of like sand art, but with flavored pixie dust sugar; the candy comes in plastic dispensers and is then poured into plastic bottles and tubes. That meant that other than the gumball machines, there wasn’t much that was breakable. As we assessed the damage, we realized that we had only lost three of our machines. Much like a head wound bleeds a lot, 36 pounds of tiny candy really spreads out and looks worse than it is. When all was said and done, we were able to salvage five of the machines (three were so badly mangled that we could only salvage them for parts) and all the Sandy Candy. We removed the cantilever shelf, redistributed the placement of the machines so that it didn’t look like anything was missing, and took a deep breath.

Upon revealing the cart, there was such a swarm of activity and bodies that I don’t think anyone even realized we were missing three machines.

In hindsight, that may have been one of the more stressful moments in my life, but it was amazing how well my team worked together and made everything happen. I’m just so happy the accident happened in the kitchen and not the party room! With the exception of a few kids who happened to be sitting near the kitchen (their little faces were plastered against the scratched round windows of the door mere seconds after the “boom”), I don’t think anyone was aware of the great fall.

It was definitely one of those moments, though, that had it been caught on video, it coulda won us $10,000 on America’s Funniest Home Videos.

We’ve since perfected the cart, so that it doesn’t happen anymore. But as my husband is so fond of telling me, “That’s why there are places where we can buy things...” My reply is always, “Yeah? Where’s the fun in that? It’s much more fun to create something!” And hey... we did get a good story out of it!