One has to be careful what one says around young clients.

In my years as a party planner, I've had one or two lapses in judgement that others might perceive as scandalous. I’m not perfect, and sometimes, in the midst of working on a large project, I may say something inappropriate for young ears. I try very hard not to do this of course, but I spend soooo much time with young ones that the odds are against me, and every now and then, there is a slip-up.

Case in point: Lily and the "hos."

For the past eight years, I have had the pleasure of creating the most wonderful Halloween parties for a beloved client in the Los Altos Hills. The family loves Halloween, and so each year they choose a theme and we go to town creating decor, activities, and tableaus to fill their entire property. The party usually takes about three to six months of planning and creation, but it’s one of my team’s favorite events. The installation takes anywhere from three to five days, depending upon when Halloween falls on the calendar.

The year of my major faux pas, Halloween was a Monday, and the theme was a haunted Wild, Wild West. Lily, the family's youngest daughter, was just six years old.

Tableaus have always been a huuuuuge element of the party. The house itself is off-limits during the party, which leaves these amazing rooms with their windows and balconies open for staging crazy haunted scenes. In the dining room that year we staged a poker scene, complete with a cheating scoundrels and drawn guns. The guest room played host to a cowboy who certainly went to sleep with his boots on, and the front balcony became the home of the "Bordello of Blood."

Whenever we can, we like to involve the family's kids in the setup. I love asking their opinion on what might be too scary, or not scary enough, and where we should set up certain scenes. So when Lily said she wanted to help us with the balcony tableau, of course I said “yes." It’s probably not a good idea to invite a child into a brothel... but that’s exactly what I did. 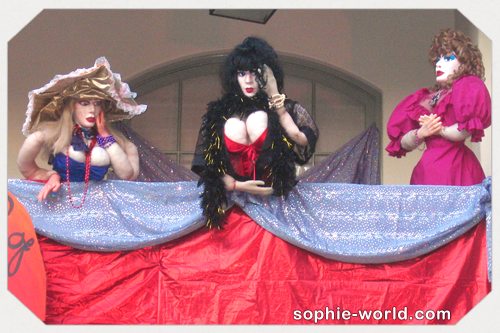 Lily was fascinated by our “ladies” and had the most wonderful time dressing and adorning them with jewelry and feathers. Freda was helping me create the tableau, and we starting playfully referring to the ladies as the “hos.” Whoops! We were all laughing about our ladies of the night, not really thinking about what they represented -- we were just having fun posing them, naming them, and playing with their hair. (One looked amazingly like Howard Stern.)

The full impact of what we had done didn’t hit home until the next day, when my client came out to tell me that she’d had a very confused call from Lily’s teacher, asking her if Lily had spent the weekend gardening, because she kept talking about dressing up the “hos." Both Freda and I realized our mistake immediately, and began apologizing profusely for the lack of discretion. However, the client actually thought it was funny... as did the teacher, who was invited to the party! When she arrived, Lily led her over to introduce her to “the hos,” and her teacher got a total kick out of it.

Like I said, I’m not perfect. But the flip side of that is that I think we created a memory that no one in that family will ever forget!