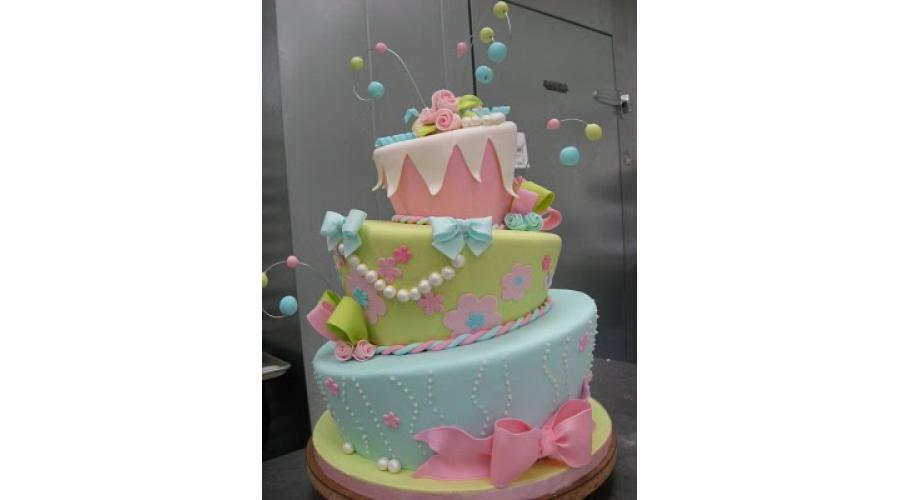 Stories of some terrifying cake ordeals/

I have to admit that I love shows like “Ace of Cakes” and the Food Network challenges where they have to make three-foot tall themed cakes. I love watching how creative these folks can be with sugar, flour, and butter! It’s unbelievable!

A long time ago, when I first started my business, I thought that I would do everything, from the invitations to the birthday cake! I was so inspired I bought a ton of Wilton brand products: icing bags, tips, shaped pans, specialty icing spatulas, cake books… I even invested in a $300.00 mixer and a subscription to Woman’s Day magazine because they always had at least one cute cake per month. I spent a ton of money and time, only to figure out one very important fact… I’m a terrible baker.

I was fine at decorating the cake with candies and icing, I did well in coming up with ideas, but baking the cakes - mixing the icing, dealing with all the sticky, icky mess, It was not for me. And then, considering all the time it takes to make a cake, you've got to really like doing it. It's a true labor of love. But by the time all was said and done, I was essentially paying the client to make their cake (meaning the cakes were costing me more than I was charging to make them!).

I will admit, the cakes were very cute, and very personal, in a homespun way. They always looked like a "mommy made" cake, which was part of their charm and what I think appealed to the clients. To this day, I have one client who still gets a cake every year (and her kid is now in college!), but she's a very rare exception! And I mentally groan every time I see her birthday month roll around.

It didn't take me long though to swallow my pride, box up my gear, and turn to the professionals for my cake needs.

Which leads me to the main topic of this entry: great cake disasters.

I had some of my own disasters, of course. There was the non-gluten violin-shaped cake that never rose and ended up being only 1/2 inch thick (but boy did it taste good!). The Barbie cake whose icing top slid off her body because it was so hot outside, making for a rather risque show and gave new meaning to the notion of a "girl popping out of a cake" The sheet cake covered with "grass" piped icing that took nearly three hours to cover and put my arm in a sling from all the repetitive movement.

No, I'm talking about bakeries much more impressive disasters - $650.00 disasters! "Stop the car, I have to throw up because the cake just collapsed" disasters!

Now, you have to understand: cake is a fickle medium. It is food, after all. And the point of a cake, at its heart, is to taste good. The problem is, if you're going to make a big structure out of cake, then it's going to need some strength, and I just don't think you get a lot of strength from a nice, moist Duncan Hines...

The worst bakery-related disaster was a "topsy-turvy" three-layer cake that we ordered for an Alice In Wonderland tea party. It was a beautiful confection: three layers tall, with the layers all tilting at wonky angles. My assistant Gary went to pick it up the day before the event. I was off doing events that day, and so I only heard about the aftermath from my sister...

Gary went to pick up the cake from our local high-end baker. The baker told Gary to place the cake in the trunk of his car since that was the safest place for it! So we thought.

In Freda's recounting of the story, she says that it was the first time she ever heard Gary curse! He came storming into the front office, threw his keys on the desk, and began rummaging for towels. The ENTIRE CAKE had slid off the cardboard base (somehow the baker had forgotten to secure the cake to the base!) and toppled over in Gary's trunk. There was no saving this puppy. Now remember: I'm at an event. So my wonderful and able-bodied staff jumped into action. Poor Gary, he probably earned his first gray hairs that day!

Thank goodness the cake was actually not needed until the next day, so there was time to make a fix. The baker realized it was their mistake, and so they offered to recreate the cake. Freda and Scott, my husband, would go to pick up the cake the next day and deliver it to the party. Scott would drive, and Freda would hold the cake in her lap to protect it.

All went as planned, even if Scott nearly got pulled over by the cops for driving so slowly. Freda talked incessantly to the cake, offering encouragement ("Come on, Cakey - You can make - Stay strong, Cakey - We're almost there"), and Scott announced every upcoming bump so that Freda could brace her self and offer extra verbal support to the cake. They made it at long last and the cake was the centerpiece of the food table!

Then there was the train cake that literally fell apart in front of the birthday boys' eyes. We were in the process of singing "Happy Birthday" when the whole engine just crumbled. So much for the nice photo op! And did I mention the witches' cauldron that collapsed in on itself like it was imploding? It looked like a spell gone bad. 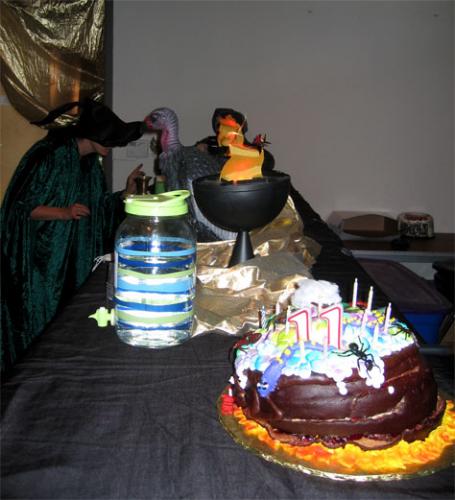 Our poor cauldron cake looked like it had been cursed...

You would have thought I would have learned my lesson by now, right? Wrong! The most recent incident happened this past fall with a pirate boat. It was a really cute cake; it looked like a Fisher Price toy, with huge sails, lapping waves, and a big bow that stuck out of the front. It was adorable. We've ordered at least a half a dozen of these pirate ship cakes over the years and never had an issue...

The trouble started right away. We had to pick up the cake the day before, and had asked specifically that the cake be made so that it would fit in our warehouse fridge. When my assistant Simone got back with the cake we immediately saw that it was too big. After phone calls back and forth to the baker, we decided that Steven (our warehouse manager who can make anything out of cardboard!) would build a box around it to protect the cake overnight from any imaginable disaster: dust, critters, falling props, and we would leave the cake out overnight.

When I came in the next morning and lifted the lid I began to hyperventilate. The entire front end of the ship had broken off the front and fallen away. The boat was broken in half, just like the Titanic. Now, you have to understand: it's 6:00 a.m., and I had to be loaded and out the door by 7:00 a.m. I'm in a total panic. I tried everything: huge flower-tipped toothpicks, tons of candy coins, candy necklaces to look like ropes... Nothing was working. It looked horrible.

I called the baker, and she called the - get ready for it - the "cake doctor." There really is such a thing. We arranged for the Doctor to meet me on location and fix the cake in my van while I set up for the party. The Doctor arrived about 40 minutes into my setup with a big bowl of icing, several spatulas, and a bunch of piping bags. Fifteen minutes later she delivered me a beautiful cake, and no one was the wiser.

Since then, I've decided that anyone who wants a "shaped" or "sculpted" cake has to pay to have it delivered by the baker. I'm done with everything but sheet cakes!