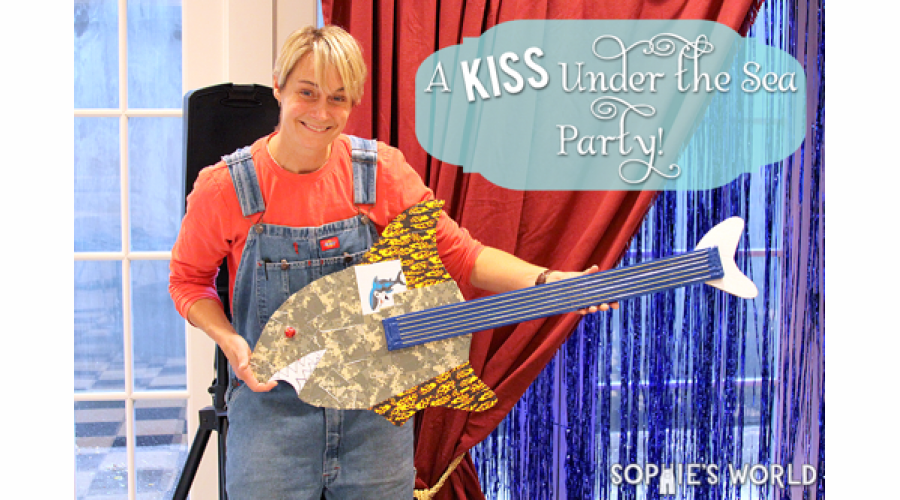 Kiss Under the Sea Party

I adore parties that are totally unexpected and challenge me to get super creative.

Case in point, my Kiss Under the Sea party. Now before you think I’m talking about a bunch of racy mermaids with puckers at the ready, I have to clarify that the aforementioned KISS is none other than the 1970’s rock band, who, believe it or not, are still going strong, thanks to the marketing genius of Gene Simmons.

Kiss Under the Sea Party Planning 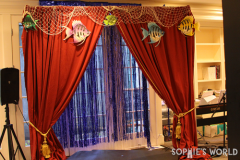 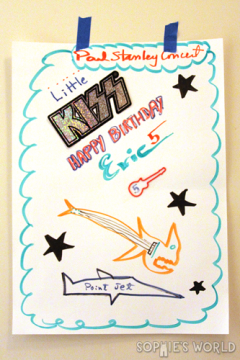 I’ve worked for this family for years, and they are obsessed with music, to the point where they have a full recording studio in their home.

Oh, and did I mention the repurposed step aerobics platform that now functioned as a stage?

Under the sea decor was not a problem; I’ve been doing ocean themed parties for years. I also have a miniature stage and portable curtain setup. All I needed were some KISS elements. This was easily handled with one online search: a KISS band cut out was on its way to my warehouse quicker than you could say “Detroit Rock City!” To add to the fabulousness of it all, my budding band promoters made their very own posters, which we hung everywhere. 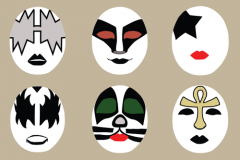 We covering the guests’ bodies in rock and shark inspired tattoos and applied KISS-style face paints. I found really great diagrams of the difference KISS face paints on Wikipedia. 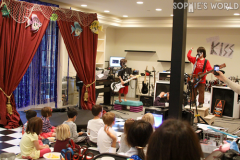 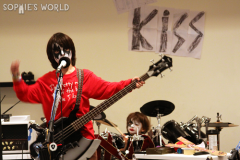 The final element of our party was a “rock concert” by our birthday boy and his older brother while cake was being eaten. Remember, these guys have a recording studio in their basement -- they’re practically pros! 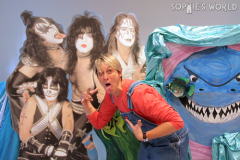 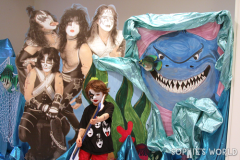 Tongue tricks
In honor of Gene Simmons, we checked to see who had the longest tongue in the room, and if they could do any exceptional tongue tricks. I personally can touch my nose with my tongue (which impressed quite a few kids, I might add) but others could do things like flip their tongues over, and one could make a sort of “W” or flower shape with their tongue.

Air Guitar
After a brief example of some standard rock moves: round house guitar strum, devil horn fingers, the one-legged air split (thank you, David Lee Roth), and the exuberant both-feet-off-the-ground, hit-your-bottom-with-your-heels jump, I cranked up “Rock n’ Roll All Night” and had everyone grab their guitars and jam. We made sure everyone had plenty of room so that no one got accidentally knocked out by a flailing limb or guitar neck!

Sharks and Minnows
The guests stood on one side of the room and tried to make their way past the big mean shark (me) in the middle of the room. If they got tagged, they had to sit down where they got tagged and wave their arms in the air like they were seaweed. To add the rock element, players could be freed if another player ran up to them and sang them a KISS song.

Big Shark and Shoe Relay Race
I split the kids into three teams and gave each team a foam shark fin and a pair of crazy high heels (remember, I do tons of fashion parties). On “Go!” the first person on each team put on the shark fin and the heels then tottered over to a big bowl where they helped themselves to a Swedish fish. They had to chew and swallow the fish entirely before making their way back to their line, removing the shoes and fin, and handing everything off to the next person in line. 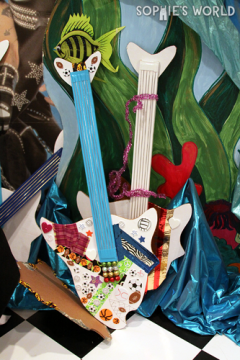 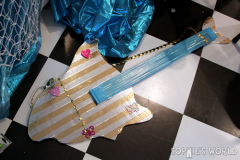 To incorporate both the rock and the shark elements into our crafts, I came up with the idea of making our own full sized, shark-shaped guitars. There are actually shark guitars on the market today, and so I based the design on that. With the aid of my ever-patient warehouse manager Steve, we created a three-piece project. The elements consisted of the shark head guitar body made from two-ply corrugated cardboard, a double thick foam core neck, and a tail-shaped headstock.

For those kids not as interested in sharks, we offered up a “flying V” and “Stratocaster” shape as well.

Guests decorated and embellished each part of their guitar with everything from paint and markers to assorted duct tapes, wooden dowels, string, and beads. Once all the pieces were decorated they were assembled with hot glue and a strap was attached.

Both the mom and I felt like the guitar was quite a substantial goodie, and so I just made simple blue cellophane bags filled with gummy sharks, Swedish fish, and chocolate sea shells, and called it an “edible aquarium.”