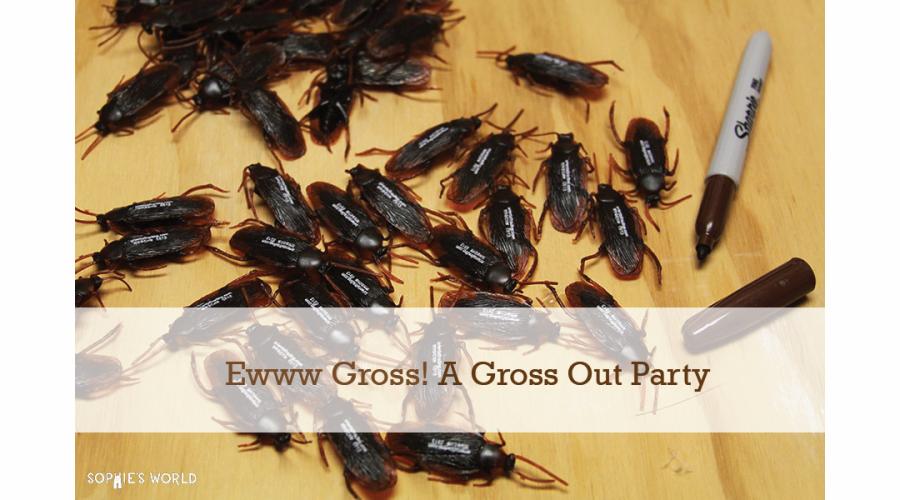 Ewww Gross! A Gross Out Party

Admittedly this may not be for everyone. But if you have a child who is enthralled by all things yucky and gross this is the perfect event!

Every now and then, we get kids who want to do rather outrageous things.  Take for example, Claire, who was turning 9, and wanted a “gross out” party for her birthday. These kinds of parties just tickle me. They are just plain fun to plan.

Given that all 9 year-olds may not quite have the same stomach for slime as our beloved birthday girl, we ended up with a party that was a mixture of gross, silly and icky. Everyone was requested to "dress for mess" and brave volunteers were chosen for events that might make some squeemish.  Everyone was excited to watch though, so no one was left out.

To get everyone riled up, we started with a series of creepy carnival games.

1. Off with their head - a “deadly” version of a dunk tank, where a ball hitting a target chops off the victim’s head. 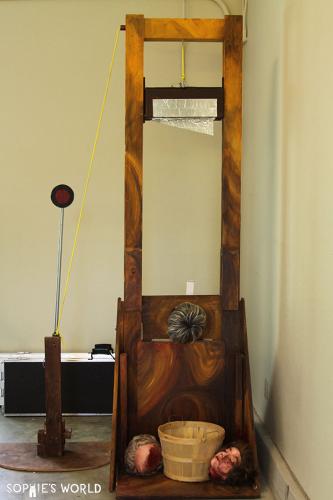 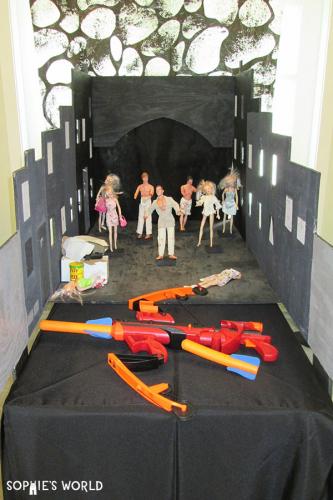 3. Rats in the sewer - mutated rubber rats are pulled from a toxic goo with mechanical robot claws. 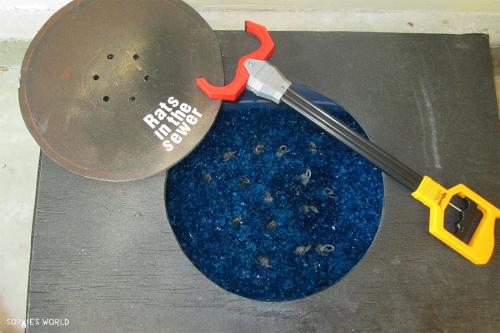 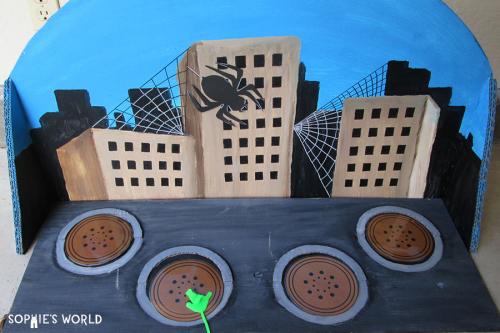 This was followed by the truly gross, “Stinky Pasta Search”.  To prep, I made 10 pounds of assorted pasta (I used whatever I could get on sale).  This was placed into a cooler with ample amounts of cooking oil.  What resulted was a slimy concoction. After being left overnight it smelled horrible.  Into the mix we added items such as a golf ball, a trophy, a clothespin, etc. Participants were handed a card telling them which item they needed to find.  They were then blindfolded and timed while they searched in the goo for the item.  We learned very quickly that the items needed to be large. Things that are too small, like dice or a beaded necklace, were too hard to discern in the heavy, slick pasta.  Also best is items that have distinct shapes (like the trophy) otherwise it can become a bit frustrating for the kids, and take a long time for them to find. 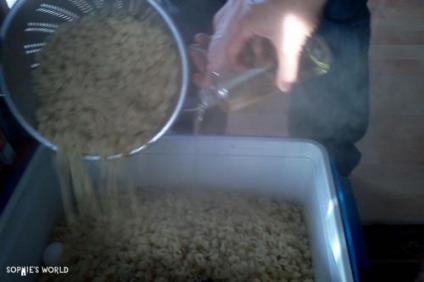 The next activity was definitely only for the brave of heart and strong of stomach. 6 covered trays were displayed on the dining room table. Under each dome lie a disgusting (but safe) edible item.  We used spam, crickets, larvae, sardines, stinky cheese, and baby food.  Those who had the nerve rolled two giant dice. The first die represented the item they must eat, the second die told them how many bites/pieces they must take. A “barf bucket” was supplied for those who found the challenge a bit more than they bargained for. However, I was impressed by how brave some of the kids were.  I personally would never have been able to gag down even one sardine! 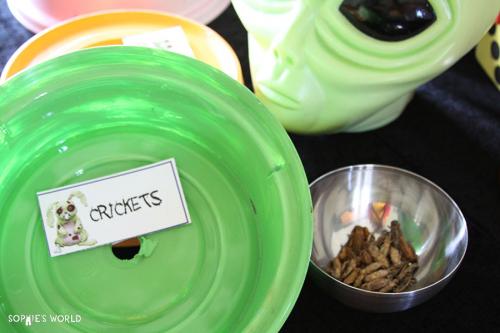 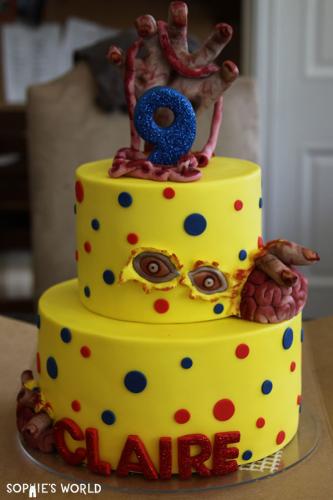 Our final activity, before we sat the kids down to dine on our fabulously freaky zombie cake from Studio Cake, was a haunted house scavenger hunt.  Kids were given flashlights, a clipboard, and a pen, and ushered in pairs, into the haunted house. Once inside they had to count the skulls, list all the creatures in the room (rats, bats, spiders, toads..), list the severed body parts, write down 6 tombstone names, and find the chicken! 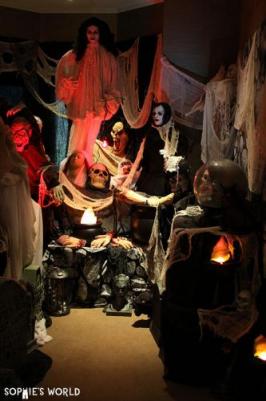 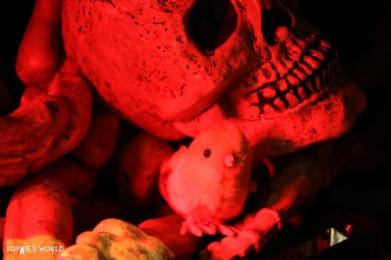 Can you find the chicken? 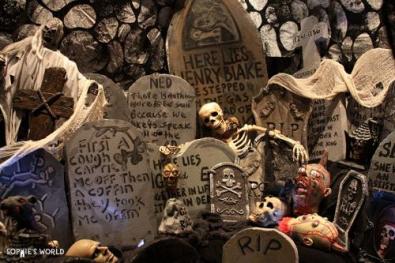 After cake there was a silly string fight, which was a great way to relieve any pent up fears the party may have caused!

Those who participated the most were acknowledged for their bravery, and handed their goodie bags first.  The goodie bags were these crazy eyeball lunch bags filled with edible crickets and larvae, chocolate bugs, cricket lickets, gummy eyeballs and worms, and rubber roaches.  A word of caution: our “realistic” roaches arrived with the manufacturer’s name stamped right down their backs.  A sharpie pen rectified the situation. Who ever heard of a “realistic” roach bearing a logo? 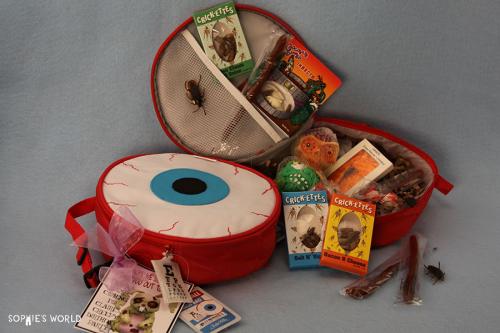 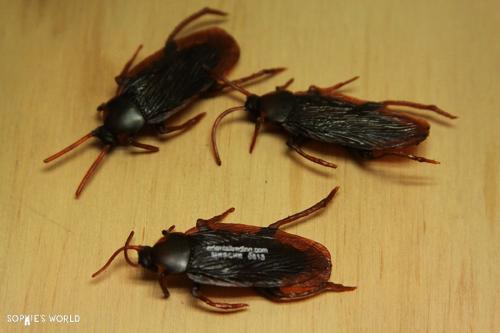 Now, I concede that this party was way over the top. You could certainly simplify it to fit your budget: Throw rubber poos into an old toilet or trash can, paint a wig head with a gruesome face and have kids try and knock it down, throw rubber body parts into cardboard monster’s mouth, buy splat balls and use a spoon to fling “boogers” at the wall, try making some slime or oobleck as a group activity.  Search for rubber spiders hidden around the house.  Have a “bodily noise” making contest or pick up peeled grapes with bare toes.

Remember, the grosser, the better!. Ask the kids for their suggestions. I’m sure they can come up with stuff that’s even grosser than I can imagine.