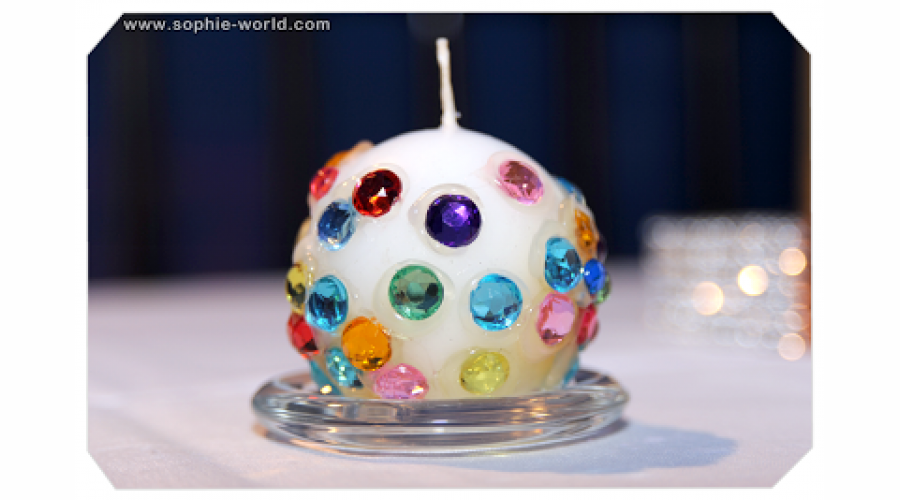 One of the best parts of my job is getting to watch my young clients grow up. It’s one of the most enjoyable things about being a children’s party planner. You get to be there for all the big milestones in life, like family reunions, school graduations, birthdays, Bar and Bat Mitzvahs. This might not hold true for every party planner, but it does for me since I focus on kids. I’ve been blessed with a core clientele that is very devoted, and I see many of these kids three or four times a year. (Maybe even three or four times a month during a busy holiday season!)

When one of my dear clients, whose face I first painted when she was just three years old, told me that she wanted a “bling bling” themed Bat Mitzvah, I wasn’t surprised. I had watched her grow up through a princess stage, then a rock star stage, then a spa and beauty stage, then a fashionista stage... And although now she was a hardcore volleyball player, a little “bling bling” was a given!

Her Bat Mitzvah was not meant to be an over-the-top, diamond stud earrings and jewel-encrusted Jimmy Choos type of affair; it was meant to be fun, playful, and sparkly. The Bat Mitzvah girl’s only request was that everything shimmer and shine. When I brought these notes back to my team, Freda’s eyes began to twinkle. She too had watched this little girl grow up, having joined my company around the time we did this client’s first Halloween party. Freda cared about this girl as much as I did, and the notion of covering everything in glitter and rhinestones filled her with glee. When I shared the theme with my crew, Freda squealed like a kid on their first roller coaster ride.

In order to make this theme a reality, we had to make the venue sparkle like a diamond! Here’s some of what we did to transform the space. 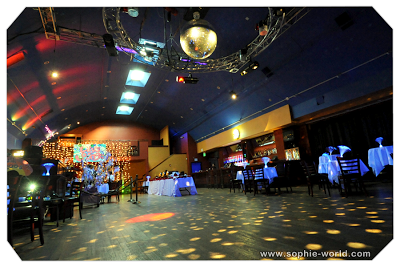 1. Lights! Lights! Lights!
The Bat Mitzvah was held at Illusions, a nightclub in Palo Alto. The owners mounted a huge disco ball to the ceiling, and brought in some extra fun laser lights. For our part, we hung long strings of twinkle lights from the balcony to create a cool entry curtain to our lounge area.

2. Twinkle Curtains
Reflective silver beaded curtains made a great covering for the walls behind our activity stations. Whenever the laser lights would hit the walls, they literally threw rainbows of light around the room. 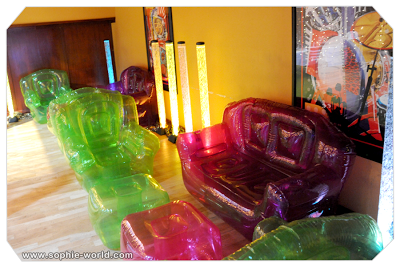 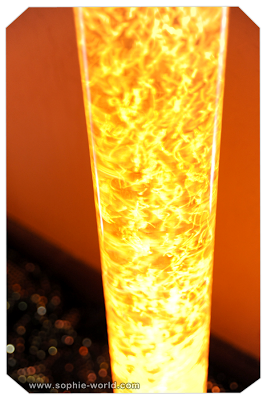 3. The Bubble Lounge
We had a great little nook under a small balcony; a sort of a dark little alcove that couldn’t really be used for too much. So we decided to turn it into the “bubble lounge!” Using candy-colored blow-up furniture plus these amazingly cool bubble tube lights, we created a sleek little hang-out zone that was perfect for kids who wanted to chat or chill. 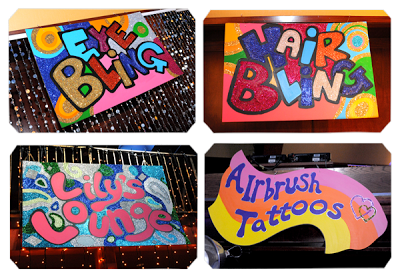 4. Signage
Every sign from the entry sign to the activity signs was blinged out by hand by Freda! Using sequins, glitter, and jewels to accent her hot pink, lime green, and black painted letters, the signs practically popped off the walls they were so eye-catching. 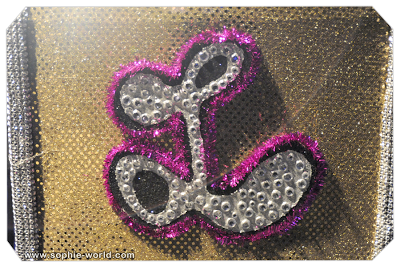 5. The Hora Chair
Our gal specifically wanted a blinged-out chair to go up in the air for the Hora. This was probably the trickiest creation -- not because it was hard to cover, but because we had a hard time finding a lightweight, sturdy chair that actually had arms. Finally, we settled for an office chair from Staples. Freda covered it in sequined fabric and then added a jeweled “L” monogram for our Bat Mitzvah gal. It was an awesome sight to see her go up in that chair! After the event we sent it home with her for her “office”! She promised me it would make homework a lot more palatable.

6. The Candelabra
We knew this needed to be spectacular and large. We really wanted something that would set the scene and take center stage when it was time for the candle lighting. Buying something like that would cost a fortune, so instead I had Steve build us a structure out of two by fours and had Freda bling it all out with a cool new product that I discovered locally at Floral Supply Syndicate. The product is a woven plastic material that looks like diamonds from a distance, but is actually just little divots of silver. It’s a flexible material that can be cut and shaped any way you want; totally terrific for everything we were designing. 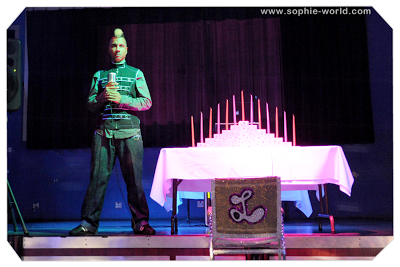 7. The Microphone
You can’t do a speech without a microphone, and if our gal was going to touch that microphone, well then it had better be blinged out! My DJ was kind enough to supply me with a microphone he no longer used, and Freda went to town with the epoxy and jewels.

8. The Activities
You can’t have a Mitzvah without some fun things to do - and so we chose to go for body adornment and the means to record said adornment. We set up a hair bling station (with hair tinsel and light up hair clips), an eye bling station (with stick on jewels and fancy eyelashes), airbrush tattoos, and a photo booth to record the beautification for all of posterity. 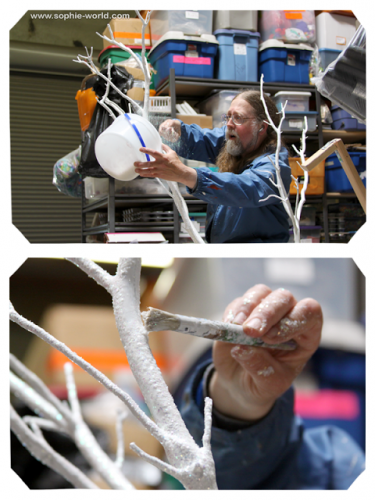 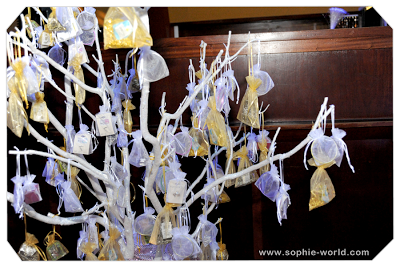 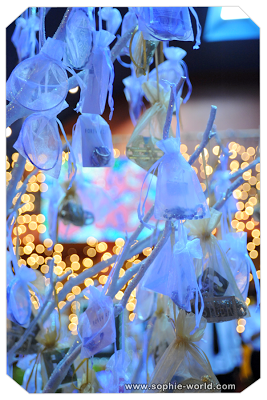 9. The Bling Bling Tree
This was by and far my favorite attraction. Stephen took manzanita branches from my parent’s backyard in Sonora, painted them white, covered them in glitter, and then cemented them into cinder blocks. When put together, four branches made a funky tree from which we hung little gossamer bags of bling. I went crazy at Forever 21, snatching up every $5 ring I could find. By the time the evening was over, everyone from Grandma to the youngest cousin was decked out in the “fruit” from the bling-bling tree. My favorite was one of the aunties walking around with a necklace that proclaimed her to be a “player.” 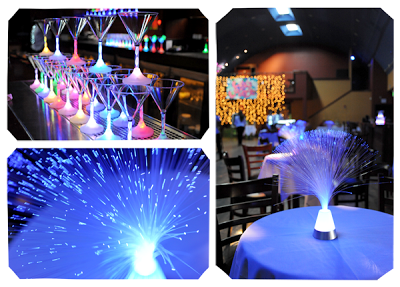 10. Glow, glow, glow
I hit the internet for everything from color changing fiber optic centerpieces to LED sunglasses and barware. Everything glowed and pulsed with color and light, but the big hit of the evening were the light-up ties I gave to all of the staff. All the guests wanted one, and by the end of the evening, not a single staff member still had theirs. I literally gave one older gentleman the tie from around my own neck! 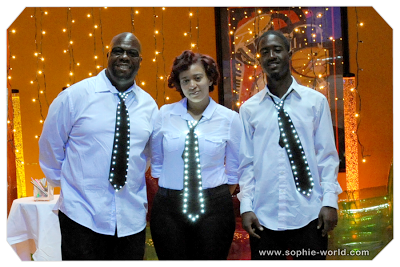 The evening was one of pure bliss. Everyone, including the staff, got into the spirit of the night. The kids were so into it, that my staff was left with very little to do (normally we are having to make sure that exits are secured, bathrooms checked, and little ones wrangled), so instead, we all joined in with the dancing! Even the caterers were dancing with us! 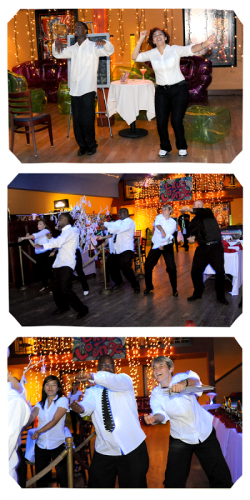 When the evening was over, and we had stuffed the last blow-up couch into my van and delivered it to the client’s house, I looked at my staff and just smiled. There they all stood, excitedly recounting the evening’s happenings, retelling some of the funnier moments... all covered in glitter, sparkling under the streetlights. My amazing, blinged-out team, had made one young lady’s dreams come true.