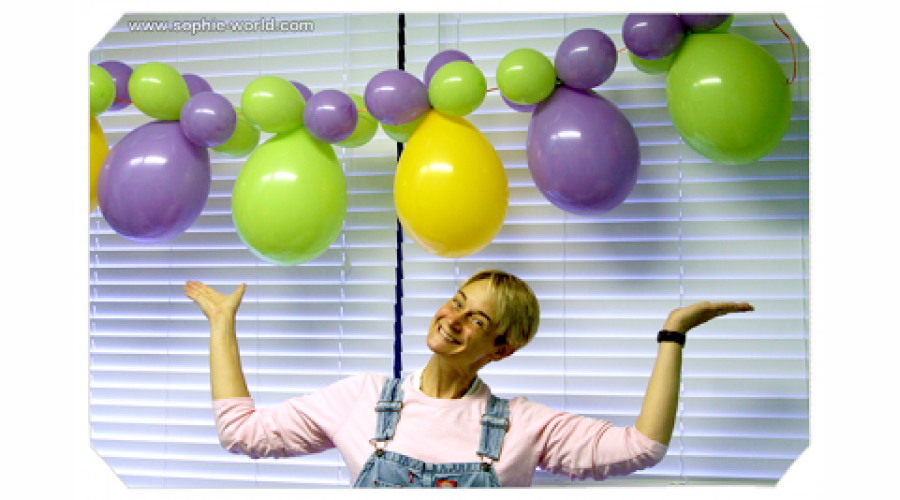 Out of necessity was born this amazing decoration.

Okay. I admit this with the loudest possible voice: I am not perfect! In fact, I make tons of mistakes. However, as many of you know from your own life experiences, often necessity is the mother of invention... or in my case, “forgetfulness is the open door to creativity.”

It happened at an event just the other day: I was supposed to bring my helium tank and blow up two dozen balloons to serve as decor in the family dining room where lunch was being served. I should note that the client’s house was a good 45 minute drive, over a bridge, from my warehouse.

Usually I am pretty thorough with my packing; I have a file with a checklist of everything the client wants, and I go through that as I’m loading the van. But this morning I was running late and I just assumed everything was in the warehouse bay ready to be packed. What I forgot to note was that I had used my helium tank the night before to blow up an emergency dozen balloons (it was a last minute call when the client realized her husband had forgotten to swing by Safeway) and had dragged my tank from the bay (with its 20 foot ceilings) into the front office (with its more balloon-friendly 8 foot ceiling). Anyway... you’ve already figured it out... I got to the location and realized as I was unloading, that I did not have my tank.

It’s not my way to disappoint, so I went through my options: drive back to the warehouse -- no, too far... Call an assistant to bring it to me -- but it was Saturday, so my assistant was off, and again, it was too far... Find a party store and buy one of those horrible, non-recyclable, disposable helium tanks -- ugh, I just couldn’t bear it... Ooooor, I could come up with a solution -- make swags out of air-filled balloons. True, they wouldn’t float, but they would be pretty and they would be balloons, and they would fill the room with color.

After confessing to the mom that I had left my tank in San Francisco, assuring her that I would take the balloons off the bill, and that I had an idea that would compensate for the missing helium, I set to work. (I must say the mom was very cool about it and basically said, “Whatever, just as long as it’s cute.”)

The birthday girl was thrilled when I enlisted her help to blow up the balloons. And even though I offered her a balloon pump, she insisted on blowing up several balloons with her mouth, which proved to be a great source of pride for her, as she pointed it out to every guest who came to the party: “See those balloons?” she would boast proudly, “I blew them up myself.” Grandma was very impressed.

So here’s how my little iron lung and I decorated her room.

When it was done the effect was charming, and my birthday girl was so proud of her participation. At the end of the event the mom declared that she was actually thrilled not to have the helium balloons as it ended up really personalizing the party for the birthday gal. And, as I would hear later from her in an e-mail, they tied the swag in the birthday girl’s bedroom where it festooned her room for the next two weeks.

Hey, with helium supplies running short, this may be the wave of the future for balloons!