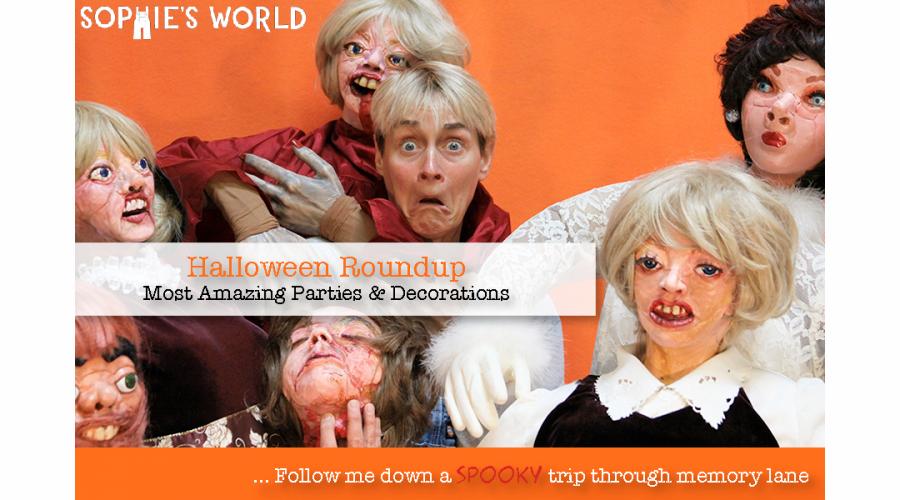 Sophie fondly remembers an annual Halloween extravaganza she created for a beloved client.

In my long career as a party planner, I have been involved in some wonderful events.  But none have rivaled the Halloween celebrations of one of my favorite clients between the years of 2003 and 2011.

Time passes and our client’s children are now young adults.  The annual Halloween party has been set aside, like a favorite toy on the top of a forgotten shelf.  Although this breaks my heart, I know that all things must come to an end. This year I thought we would celebrate by taking a moment to look back at what we were able to achieve.  Often the things we created were well above the capacity of our tiny workshop.  But we made it happen, time and time again.  The events were not without their share of challenges either: horrid weather, scheduling conflicts, and a long, winding driveway that required everything to be carted in by hand or off-loaded into small vans.  As I look back, all I can do is shake my head.  Even now, I’m not sure how we made it all come to life year after year...but we did. 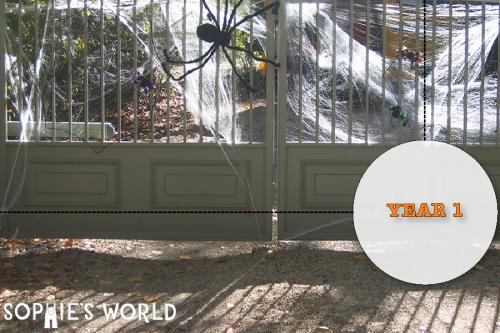 Was just a basic indoor party - a prelude to the years to come. 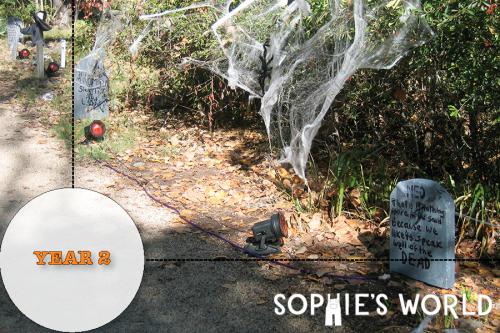 We expanded our reach and included the outdoor areas.  It was the first time I’d ever hired a company to tent anything and the first year that we created the haunted driveway.  The driveway leading to the property was longer than a football field!  My team and I created over 75 styrofoam tombstones to create the illusion of walking through a graveyard.  This is when we first came up with our ground popping ghouls and the first time we included a real lighting company in the mix.  My friends at Got Light will never forgive me for the weeks of washing mud off of cables, as it rained like cats and dogs all night. 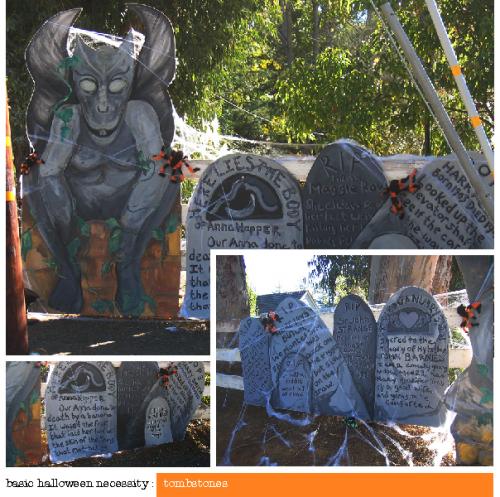 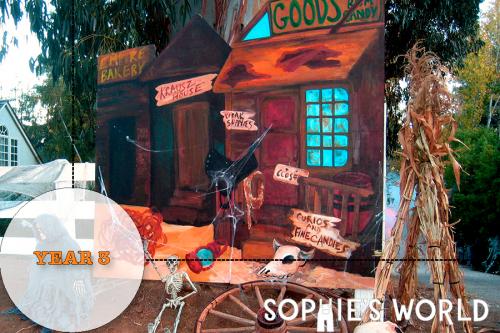 Our first themed year.  The client and I decided to go with a "Haunted Wild West" theme. We created games such as our ghostly shoot outs and fabricated Lily’s “ho’s” as decor.  This was the first year that we experienced crashers. Word of this party had spread and people began traveling as far as 20 miles to see what we were doing.  We ended up with twice as many guests as we had anticipated. 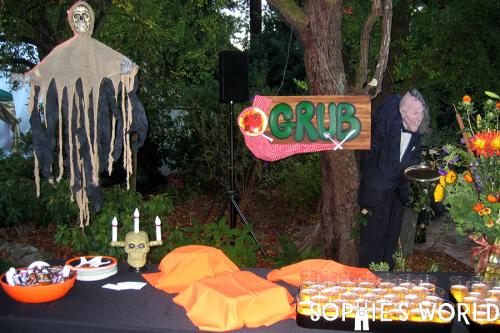 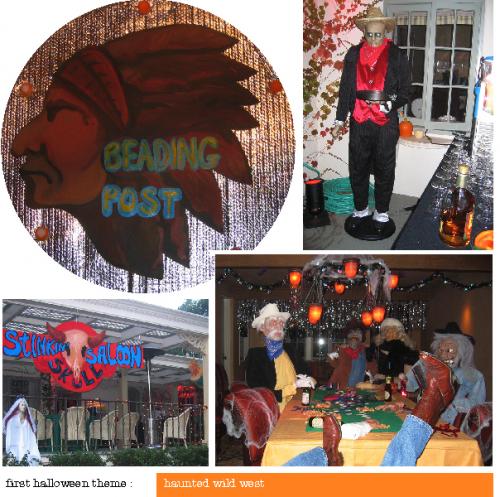 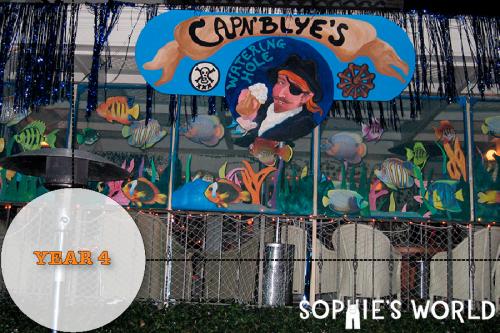 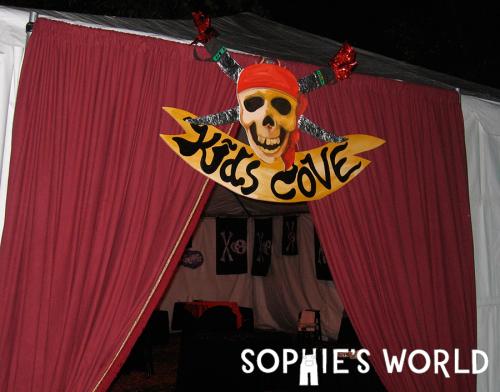 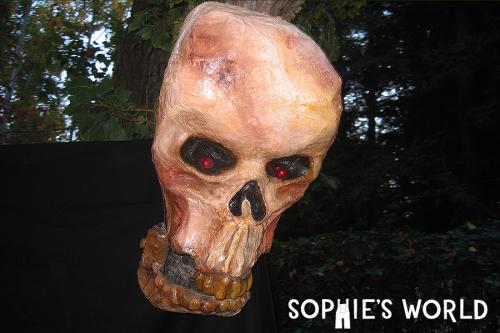 By now, this party had become THE Halloween party to attend.  We made extra preparations for the onslaught of people and traffic.  Security was added, along with street closures.  The driveway became a ghostly vision of underwater madness.  We tied thousands of light catching mylar strips to the trees. The rippling water effect was both spooky and mesmerizing.  It was also the first year that we added Mr. Bones - a huge skull that was manipulated by a puppeteer and talked to the children as they passed by.  Mr. Bones was created a a Pirate prop but he was such a huge hit he became a permanent fixture.  Our annual theme discussions would from then on begin with…”and how will we dress Mr. Bones?....” 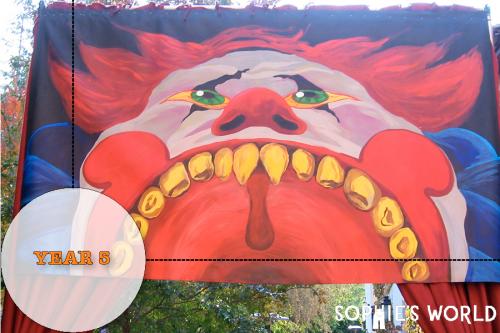 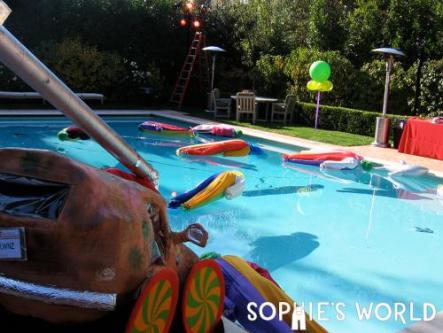 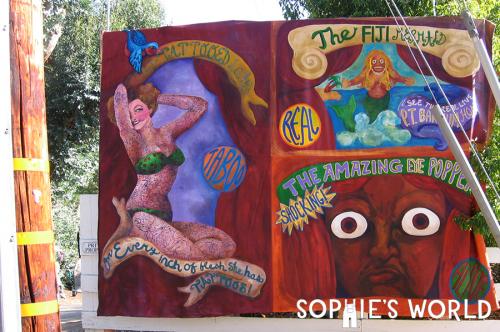 My crew and I really went all out for this one. The decor was amazing! 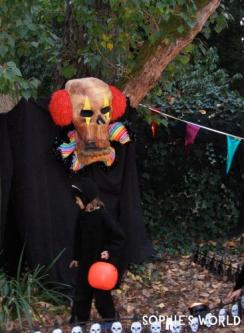 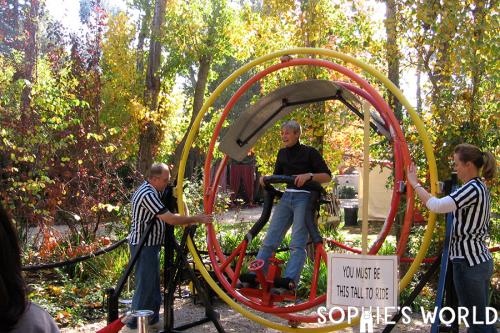 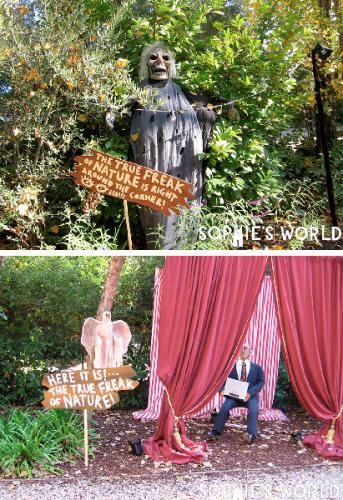 The true freak of nature- A compassionate venture capitalist

Mr. Bones became a clown in our “Creepy Circus” themed Halloween.  The pool was filled with dead floating clowns, the product of a crashed clown car.  Guests entered through the mouth of a huge evil clown. 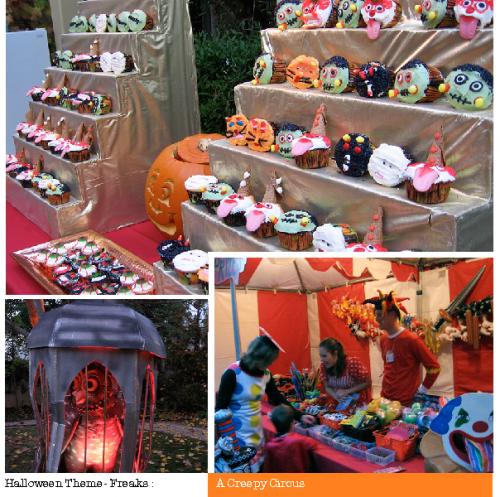 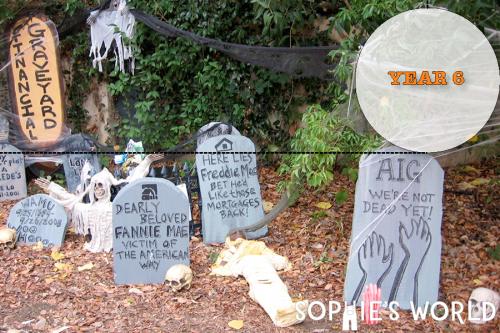 The true graveyard ... of the financial world

In year six, we took a trip down the Nile.  The pool became the location of our Nile River Cruise.  We had a team that designs parade floats construct an actual working barge.  Two of my employees guided the boat, like a floating pony ride.  The driveway became the alley of the sphinxes - with giant sphinx-like cutouts of everyone from Hanna Montana (remember her?) to Michael Phelps! 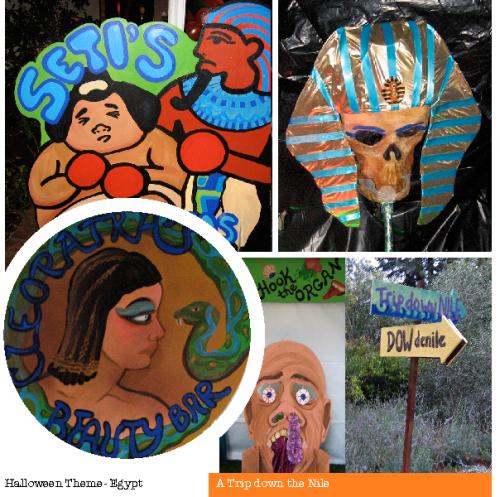 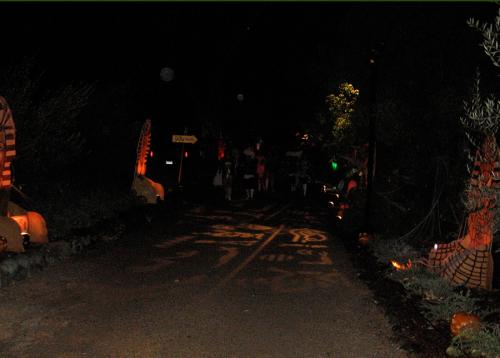 Walking through this to get spooked by these: Eek! 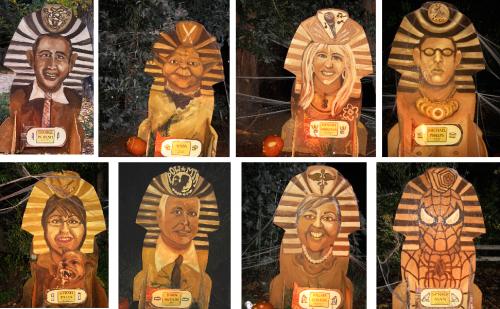 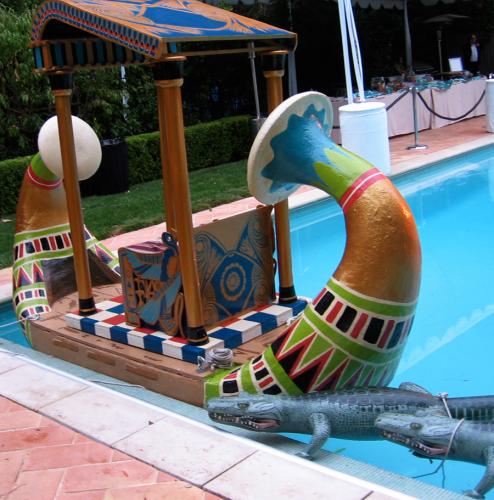 Welcome aboard our very own, working barge 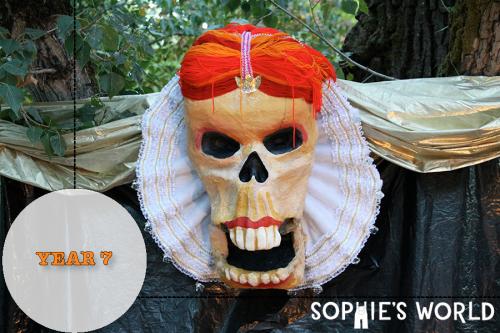 This was our last big hurrah. A spooky send-up of the Wedding of Prince William and Kate Middleton - A Bloody Royal Wedding.  We honored the young Royals by embracing all the fabulous and scandalous monarchs from the past.  The dining room featured a tableau of Henry the Eighth sitting down to dine with all of his wives, some of which were actually beheaded.  The crowning glory was Steve’s working guillotine game, where you threw an apple at a target and beheaded a scoundrel as your reward. 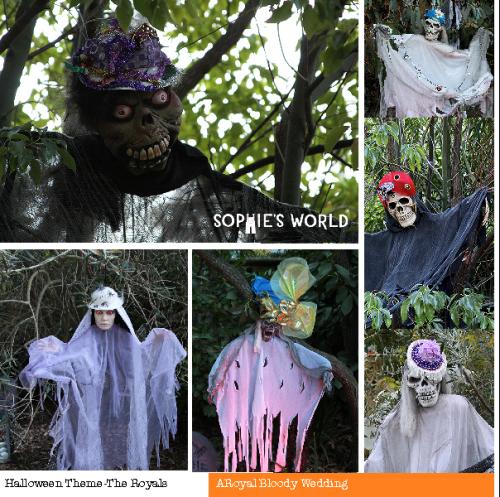 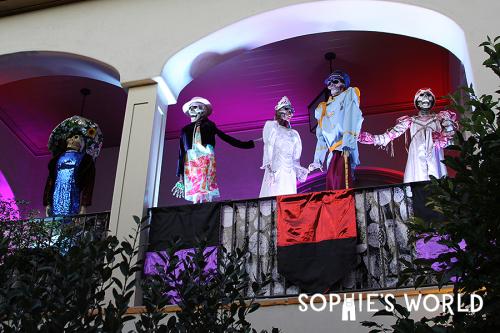 Now thats a second floor balcony with a view! 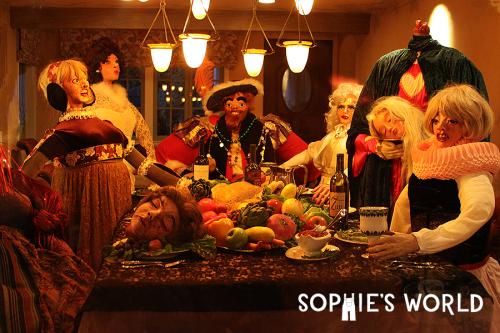 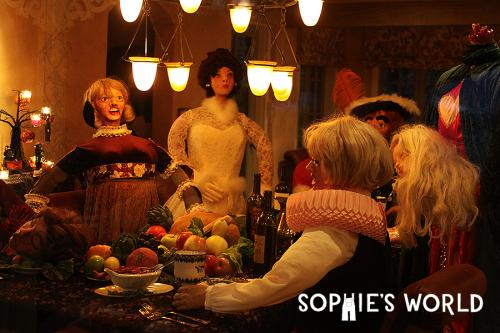 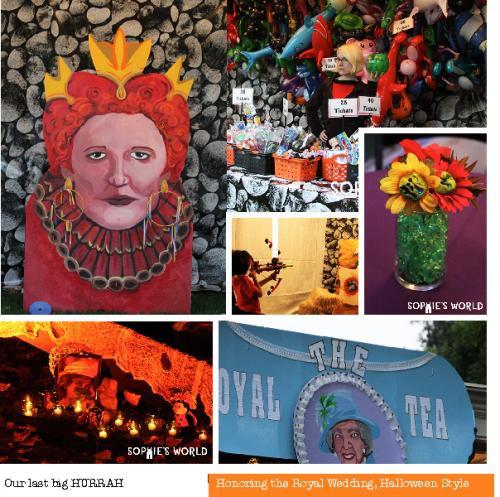 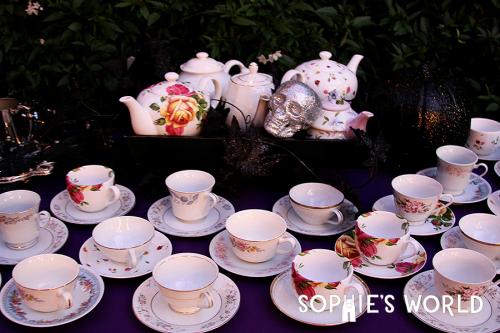 Some tea for you? Do you take it with a splash of life?

If you calculate in your head, you realize there are a few “dark” years here or there.  Those were the years that we celebrated the bar and bat mitzvahs of our client’s children. The collapse of the economy was also a bit of a factor.  But for the most part, these Halloweens were an annual tradition, viewed by literally thousands of people over the years.  I heave a heavy sigh and wipe away a few tears as I think back to the excitement, challenges, and utter exhaustion that these events generated.   I consider myself one of the luckiest people in the world to have been involved with such spectacles, and I’ll take these memories with me….to the grave!