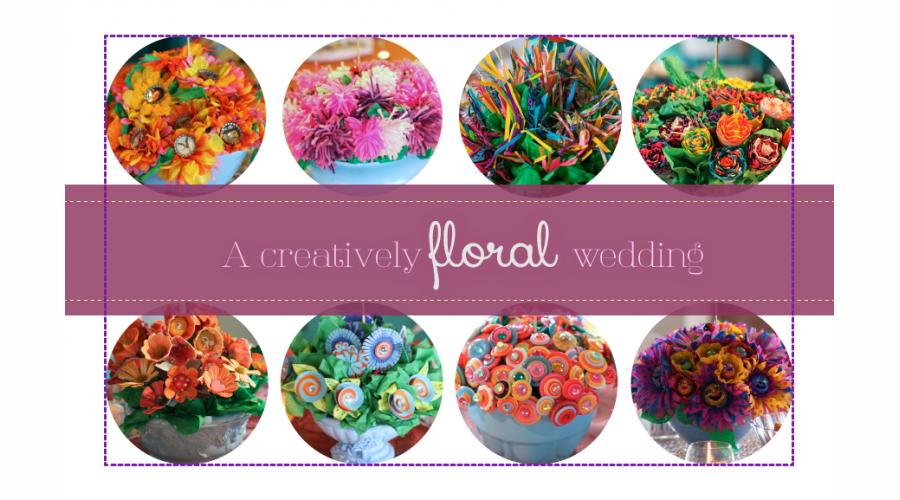 An Alternative to Wedding Flowers

I have always loved flowers.  But...working in the event planning industry has really dampened my love of cut flowers. I have thrown out thousands of flowers in the last 8 years. More often than not, at the conclusion of an event I find myself schlepping flower arrangements to garbage bins or hoisting beautiful, 6-foot tall artistic displays into dumpsters and slopping water all over myself in the process. You would think people would want to take them home but they almost never do.  So when it came time for me to plan my wedding and think about flowers I wanted them... just not real ones. 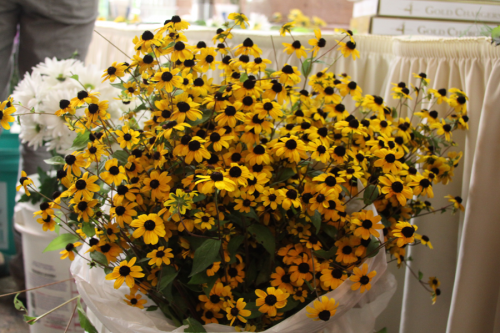 Beautiful flowers - in the garbage.

So, where does a bride begin, 8 months out from her wedding? - Pinterest my friends! I started a board and included my sister Sophie and my husband’s sister Colleen, who is very crafty herself and formally ran a blog about cooking, crafts and girl time.  We all searched the web and pinned handmade flowers we liked. I knew I needed 14 different styles since I wanted a different type of flower on each table. I also wanted each guest’s escort card to be a small vase contain a single flower from their table's centerpiece.

The real flower making began with my husband’s Aunt Cathy. She is an excellent crocheter.  I sent her some yarn and she, with the help of my mother-in-law, Essie, got started on making hundreds (and I mean hundreds) of crochet flowers. They passed the flowers on to me and I made stems for them by painting 12 inch skewers green and hot gluing a few of each “bloom” to make them rich and full. I topped each one with a rhinestone because all that glitters is good in my book. 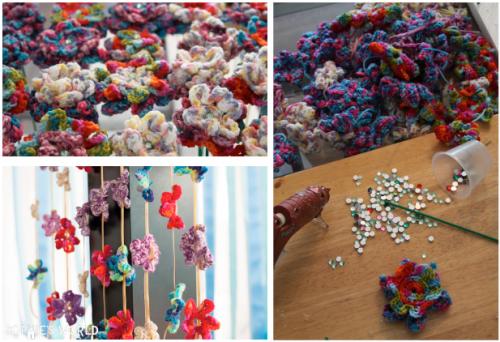 I began by making duct tape roses. I made 60 of them. They took about two weeks, a few hours each day.

Next were my duct tape sparklers. I created these from just messing around with extra pieces from Sophie’s last film shoot where she made duct tape woven friendship bracelets with Hanna. These were fast and simple. I ended up making my own video about them. I was able to make 50 in only a few days.

Some of the most time consuming flowers were silk flowers with clay faces. I had done something similar for the previous Halloween and had really enjoyed making them.

First, I sculpted over 100 faces. (about five episodes of Law and Order worth.) I then allowed them to dry and ended up coming back to them much later. Painting them was a long process.  I did a few a day in between other flowers so I would continue to like them. (Too many of these at once were not so fun.) After they were all painted I used spray shellac to make them shiny and lock in the paint. I then went to Michael's Arts and Crafts and bought silk flowers. I went all out and got the really great ones I never buy because I could never before justify the cost.  I took these flowers apart and made new combinations of colors. By mixing up the flower petals I felt like I was making each one more special and unique. I was also able to almost double my flower number because by mixing them I could get more out of each one.

I used skewers as stems again and hot glued the new combinations of petals together.  Finally I attached the clay heads to the centers of the flowers with E-6000 glue. I first tried hot glue but the glue popped off the back of the clay. These took the longest span of time to create but they were well worth it - and my husband’s favorite! As a noteable sidebar, my cat went all pika on the air dry clay. Every time I worked on these she would manage to get ahold of one and gnaw on the face. She ruined about 12 of them over the months.

As the months of flower making ticked by I started to make some simpler, quicker flowers. The first of these quickies were silk flowers with mini bigfoot silhouette centers. I drew a bigfoot and my sister shrunk the image on her computer and printed them for me. I used a 1-inch circle punch to cut them out and hot glued them into the centers of silk flowers. These only took a few hours to make. 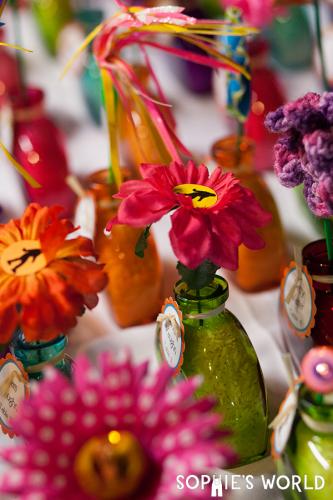 My sister had bought me a bag of Domo’s in the past and I mixed up some silk flower petals and then hot glued the Domos in the centers of those. Again, these only took about 4 hours.  Incidentally these were Sophie’s favorites.

I pulled a multi-tasking act with my button flowers. They appeared first as content on Sophie’s World. You can make button flowers pretty quickly but because they are so small I had to make hundreds of them to really get a full bouquet.

My mother-in-law made me 50 candy roses from Rolos and Kisses.

I made about 30 Pom Pom flowers from yarn in a few hours. These were such a huge hit that Aunt Ruthie had to take the entire centerpiece home! That was extremely flattering to me as the creator. 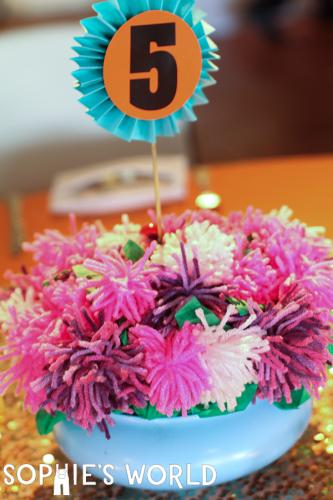 In the past I enjoyed making Magnetic Bottle Cap Art that I sold at craft fairs. I have so many of these bottle cap magnets in my house I thought why not make them into flowers? I used silk flowers as the base then used E-6000 glue to attach a washer to the centers of the silk flowers. Once those were good and dry, (about 24 hours) I let my husband pick the magnets he liked the most and we stuck them to the center of each flower. People really enjoyed these. 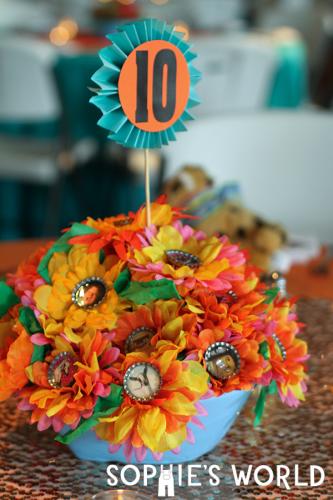 I got the idea to make Egg Carton Flowers from Pinterest. I thought they were such a clever idea I photographed the process to share on Sophie’s World. In the end these were my favorite. I thought they turned out very sweet and beautiful. They took several weeks to make but I never felt bored making them.  I made each one different. 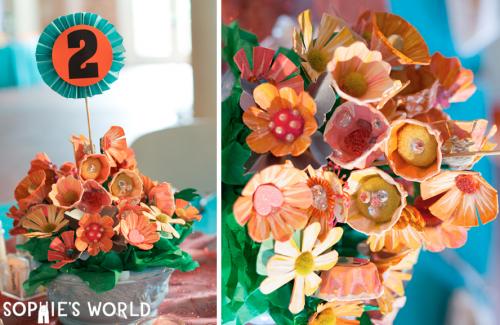 As the date rapidly grew closer I admittedly panicked a little and went to Michael's Arts and Crafts for some inspiration. I found 4 bags of paper scrapbooking flowers in a clearance bin. These I took and painted with acrylic paint then glued together in unique combinations to create a relatively quick bouquet. 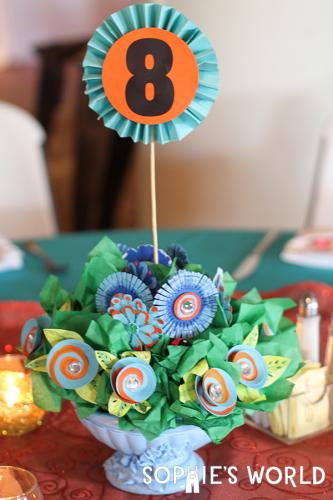 We had two kids tables and for these Sophie bought me a few pounds of lollipop flowers. At this point I was a wee bit tapped out on flower making creativity. Kids love candy - so this worked out very well. 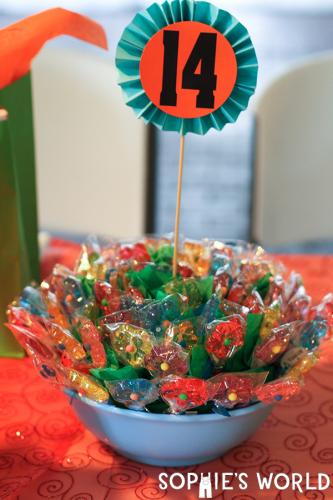 To create the table numbers, Sophie found a really neat folded paper flower in American Girl Magazine, which we used as our inspiration.  I fan folded regular paper, creased it in the center then opened it up, touching the two open sides together (this made ½ of the fan - each one took 2) . Sophie made table numbers on the computer, printed them on cardstock and I cut them out with a 3 inch circular hole punch. I hot glued the numbers to both sides of the paper rosette. They were placed into the centerpieces on wooden skewers which I had glued into the folds of the rosette. The skewer was helpful in ensuring the numbers were straight as well.  I also used this technique to create my bouquet. 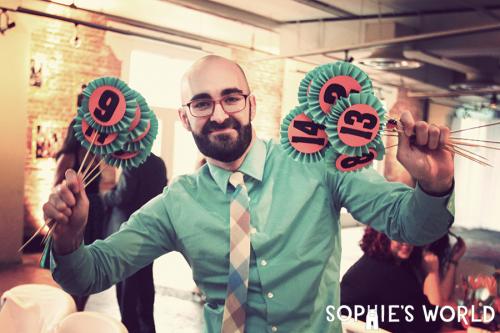 Meanwhile, Essie and Colleen had been collecting interesting glassware. They went to yard sales and collected medium sized bowls, at least 3 inches deep and between 5 and 8 inches wide. They spray painted each one a light blue. I loved how the bowls looked uniform but were still funky and different.

I filled each bowl with floral foam covered in green tissue paper. I had all of the 14 flower types lined up in front of me.  I simply picked which flower was best suited for each bowl. Sometimes I added green tissue paper in between flowers as I inserted them so that they kept a floral profile and didn’t all mush together.

For the escort cards I bought 130 vases from an online retailer.  Sophie made name tags for each that Essie then cut out with a floral shaped dye punch and hole punched. She then tied raffia around each vase and attached the escort card. Each small vase was then filled with rice and we inserted the appropriate flower into each, so that the flowers corresponded to the centerpieces. 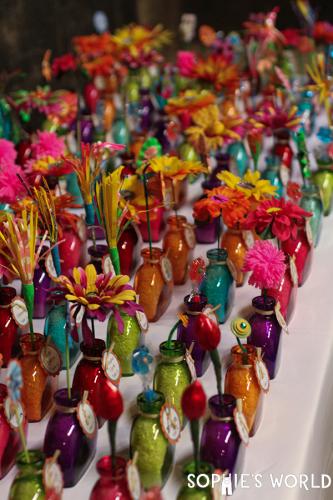 The result was exactly what I hoped for. After the ceremony guests passed by the table of escort cards and found their names which were arranged alphabetically. They took their vases to their tables and chose their seats. The centerpieces and the ring of flowers around the table were beautiful. I was delighted with the result. 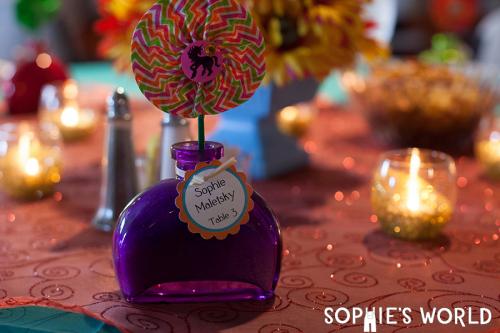 As the reception came to a close Sophie and my local planner gathered all of the centerpieces and put them back on the table where the escort cards had been. Guests were then invited to make their own bouquets on their way out. Not a single flower was left! 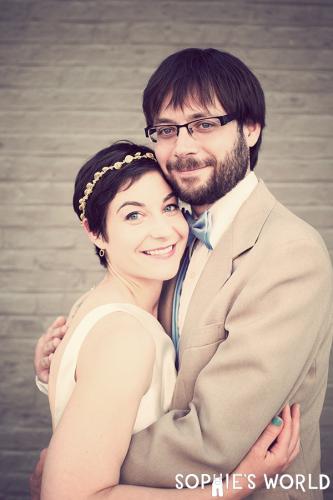