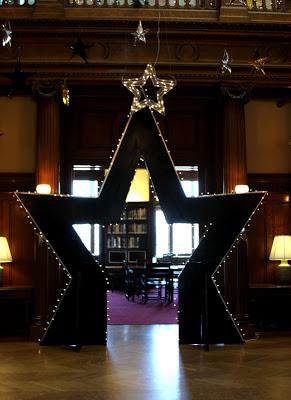 Every once in a while I have one of those crazy days where I need my sister Freda to join me on site for events. Usually I don’t like to do this, because she already has a full schedule working in our office and warehouse, but every now and then things get a little hectic, and she’s the one I know I can turn to.

Before I begin, I must say that no one -- and I mean no one -- has a better eye for décor than my sister. She has a great knack for placement, and uses color and fabric like nobody’s business. This is why whenever we have to decorate for an event at the Hamlin School, I bring Freda along.

Little did we know what awaited us this time...

The day started out like any normal day. Freda had all the props and boxes lined up in our warehouse bay; I pulled the truck around and we began stacking, fitting, sliding, and shifting. We had to be extra careful while packing because we had some very delicate oversized pieces that needed to be transported to Hamlin. The theme was “Old Hollywood,” and Stephen (my warehouse manager and in-house designer) had created an enormous eight-foot light-up star for the event. The star was designed in pieces, but even so those pieces were pretty large. The main issue was we also had a “Royal Wedding” themed party that evening, and everything was already in the truck. The van was packed full to bursting -- but if you know me, you know this is nothing new in my life!

We had a tiny bit of a shock when we realized that the wood glue Stephen has initially used to build the star (but then later abandoned for liquid nails) was still wet, and seeping from the bottom of the pieces, puddling on the floor. This hadn’t been an issue when the pieces were lying flat, but after standing up on their sides all night in the loading dock, the landslide had begun. We were in a frenzy as Freda had to scrape and pick at the glue, then tape the star to make it workable again. (Note to self: never use wood glue on slick foam core!)

In spite of this we were still doing well; all the boxes and weeping pieces were packed. The only thing that remained was the top piece of the star. I had left just enough room to slide it into the top of the van but there was one problem... the piece was too wide. Originally, when Stephen designed the star, he made it four feet wide, which is the perfect width to slip into my van. However, that was before he added the “wings.” The wings were added as an afterthought when we discovered the arms needed a bit more strength. They added that strength all right... and they also added three feet of width.

Now, if the van had been empty -- no problem, the top could go in at an angle and all would be well. But as you know, the van wasn’t empty. We had a serious problem, and we had to be at Hamlin in an hour.

There were only two solutions to this mess:
1. Go to Hamlin, unload everything there (including the “Royal Wedding” party), then drive the empty van back and get the topper. That would have been fine if we had a huge team, but it was just me and Freda alone on this setup, and we were already limited in our timing. We needed every minute we had.

Or...
2. We could strap that puppy to the top of Freda’s Ford Focus.

Before going on, let me just go on record and say that I know a tiny bit about physics and wind current, enough to know that putting this thing on the top of Freda’s little car was basically turning her car into a paper airplane. I didn’t like it one bit. My sister, on the other hand, had no reservations. She’d transported numerous oversized art projects during her college years on the top of her old Ford Festiva, including a 150-pound life-sized statue.

Ready for takeoff? I hope not!

At Freda’s insistence, we strapped the piece to her car using an entire roll of stretch wrap (which is basically Saran Wrap on steroids). After taking a few laps around the warehouse (Freda looking like Mario Andretti in braids), we decided to risk the highway. The plan was for me to drive behind Freda with my blinkers on; we’d go in the slow lane, and hopefully we wouldn’t attract the attention of the CHP, especially since it was rush hour. Well, the minute we turned onto 101, I knew we were doomed. Not only did the slipstream from driving start to cause “lift off” almost immediately, but the winds coming off the Bay were buffeting the car, almost forcing Freda’s car off the road. The two of us were in constant phone contact on our headsets, and I could see the fiasco unfolding in front of my eyes. I advised -- okay, shrieked -- that she needed to get off at the first exit. We pulled over, added another layer of stretch wrap, and recalculated our route. It would probably add another twenty minutes of drive time, but we decided to go the back way on the surface streets. Great idea, except for two things: lights and wind...

Tune in Wednesday to find out what happened next on the road to Hamlin!