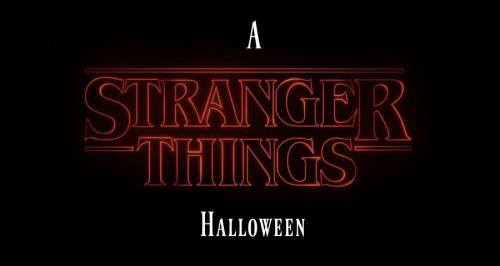 I know...it's already mid-November and I'm just getting around to sharing this Halloween post.  What can I say that I literally have not said a dozen times in my posts this year...this year just seems to be passing faster than the speed of light.  I so wish there was a way to slow it down.  I feel like I'm racing from thing to thing trying to play catch up.  Like a dog chasing his tail.  Or in this case...a demi-dog.

That's right, delayed as it may be, this is my homage to Stranger Things one of my dirty little Netflix secrets.  My husband Scott is not a big fan of horror, sci-fi or fantasy, so whenever he heads out of town, I hit the couch.  I can't wait for season 3; as soon as it's announced I'm booking my hubby a ticket back East to visit his family!

Luckily one of my beloved Halloween clients decided on a "Stranger Halloween" this year. For me and my team it was an excuse to not only binge watch the series again (hey, it's research) but create some fun props and set pieces.

We treated the lobby as "the town" - guests were welcomed by a "Welcome to Hawkins" Highway sign. 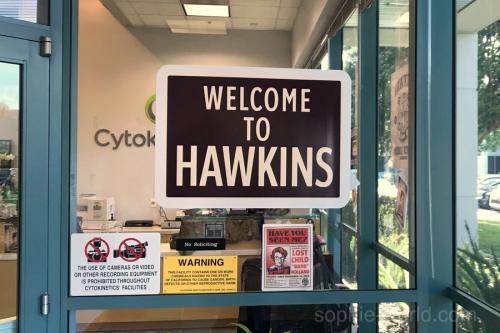 The walls were peppered with "have you seen me" flyers of both Will and Barb. 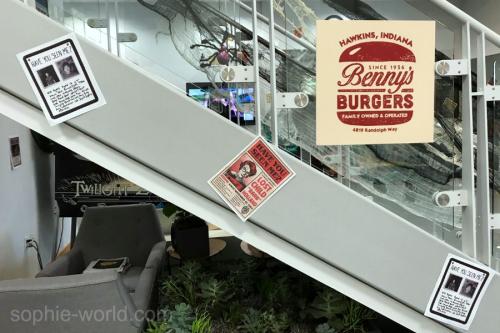 We set up a Hawkins High AV Club table, where guests could play with silly Halloween props like a ghostly old movie projector and a microphone that recorded your message and played it back in a distorted, "Will caught in the upside down world" sort of way. 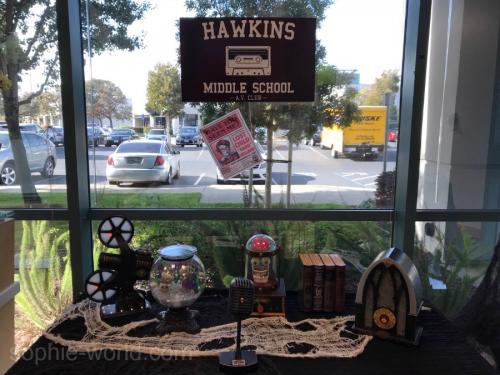 Elle's blanket fort served as a great hideaway for our younger set - strewn with pillows, blankets and play mats, it was an awesome spot to sit with the baby and take a break. 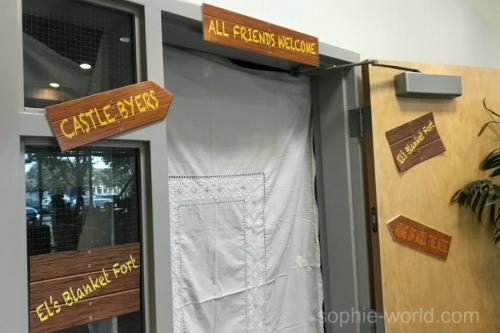 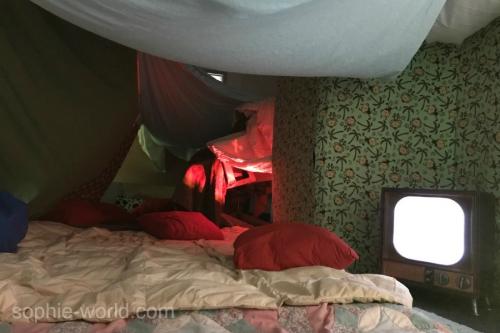 Merril's farm, sporting it's rotting pumpkins, graced one wall, while a mini arcade, complete with pinball, Pac-man and Frogger was set up around the corner. 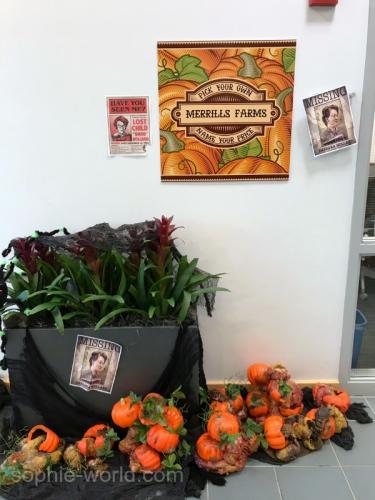 My favorite decoration by far was our entryway, which we decided to turn into the gateway between the real world and the upside down.  Using carpet mask, a plastic that painters use to protect floors, we rolled vinelike tubes which we then easily adhered to the walls and doorframe using the tacky backing on the plastic.  We discovered that we could roll pieces of green and brown tissue paper in the center to give us varied colors and textures.  The plastic had this wet, slimy appearance when the lights were turned down at the start of the party...it was perfect. 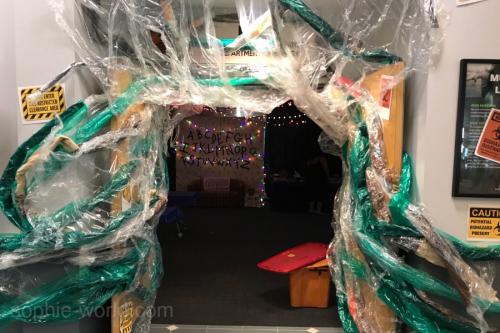 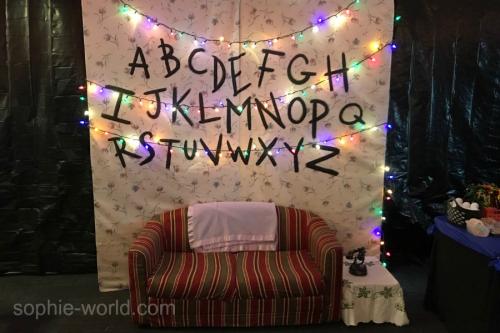 and Will's drawings of the upside down tunnels. 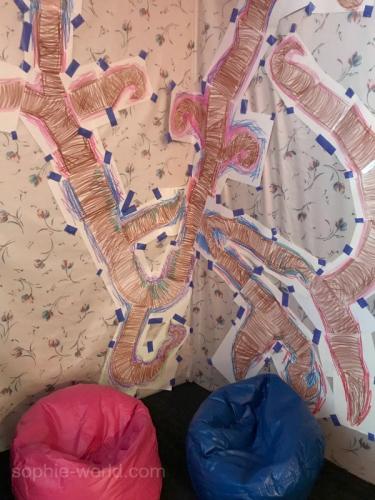 One corner sported the forest, where we place a dummy dressed in a Demogorgon costume while the video screen showed images of something moving behind the walls. 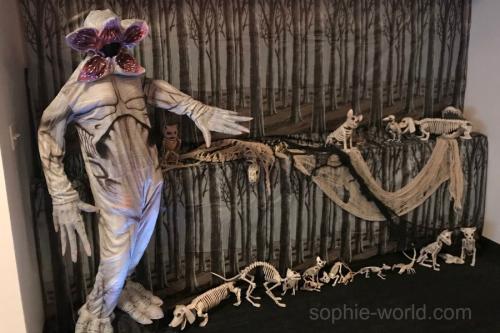 The wall video came from this awesome site Atmosfx.com where they sell this amazing array of digital decorations that are just plain creepy. 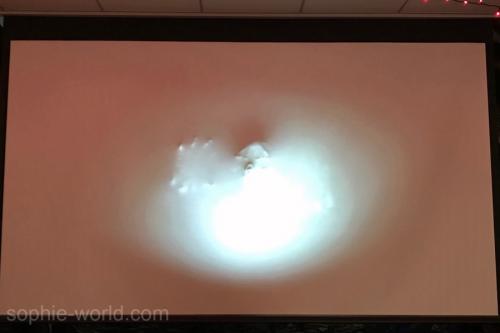 In our crafting corner guests could make an assortment of 80's inspired crafts from Trucker hats, to shrinky dinks , to our all-time favorite cardboard arcade games.

For challenges, we turned the famous "donuts on a string" game into a game worthy of El's approval - "eggos on a string".  Contestants had to try and eat a suspended Eggo without using their hands. 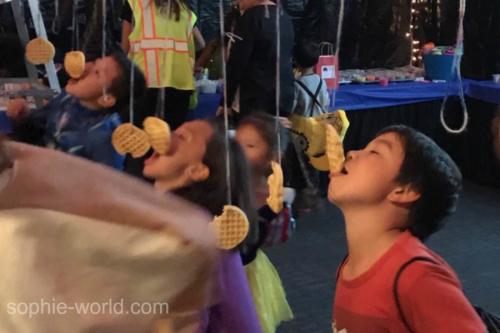 We gave everyone 20 minutes at the craft table to come up with their own out of the world science project.  It was pretty impressive.  The rules were your experiment didn't have to necessarily work, but you did have to explain it as if it did.  We ended up with machines that converted sunshine into candy, water into fuel, and reanimated the recent dead.  Pretty fun stuff.

This crew is way into trivia, and so, of course, I came up with the ultimate Stranger Things trivia for them.  Needless to say the couple dressed as El and the Demogorgon won.  (I'm including a pdf of the trivia along with the answers should you decide to host your own party)

To top off the event we played all 80's music to which we held a dance off.  A costume parade was mandatory, with rubic's cubes being handed out to all the winners.  All in all this Halloween tribute party just made my Holiday.  This is a great party theme...I swear.  And to quote El, "friends don't lie".