I Have So Much to Learn...
Learning Math Through Play
2022 Party Rates
What Makes a Good Paint Pen? - A Review of...
Driving Me Crazy 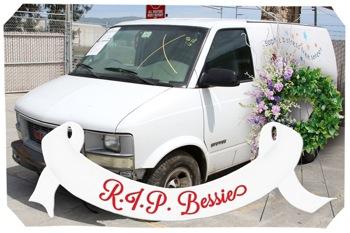 Bessie, beloved friend and companion, was legally declared dead by the State Farm Insurance Company on April 30, 2012. Her death was caused by an accident that occurred on April 25th, when Sophie, Bessie’s driver, swerved to avoid hitting a strange fuzzy animal that darted out from the shoulder and onto the road. Although Bessie fought valiantly to maintain her grip on the road, she jumped the embankment and ended up on the train tracks in Redwood City, causing irreparable damage to her undercarriage and internal organs.

Born a GMC Safari 2001, Bessie was christened after her predecessor Gus, a red Mazda pickup truck with a matching cap, was struck by a drunk driver. Bessie valiantly shouldered the responsibilities of delivering games, prizes, balloons, and decor to over 2,000 parties in her 10 year service. She racked up over 160,000 miles before her sudden demise. 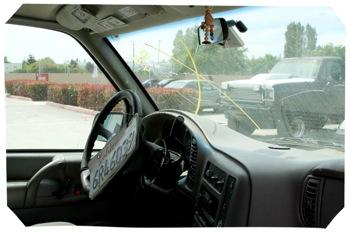 An integral part of Sophie’s business, Bessie had been featured in several blogs and articles that chronicle her exploits, including such pieces as “I think I need a bigger van!,” "Truck troubles," "Bessie gets a makeover," and "Bessie goes to the big house."

Although she suffered through a faulty electrical system, a transmission replacement, three sets of tires, and multiple incidents with her door locks and windows, Bessie was a workhorse that never complained. Her travels took her up and down the coast of California, delivering joy to tens of thousands of children. 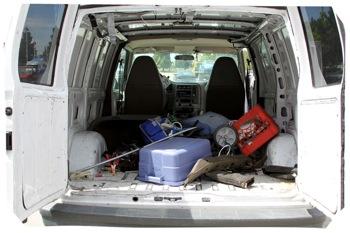 A memorial service will be planned whenever the company gets a free moment.

Bessie will be missed by all that knew her. She was a good friend, employee, and van.