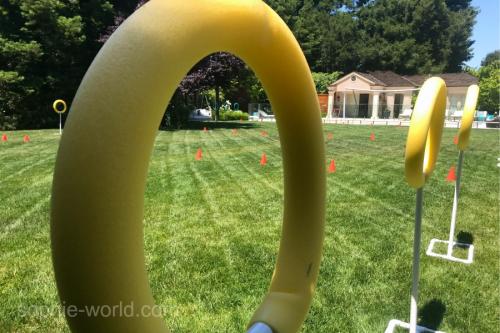 One of my all-time favorites is my Harry Potter party.  Thanks to the imagination of JK Rowlings there are literally hundreds of amazing party possibilities; from the first book and experience, which includes a trip to Diagon Alley, a ride on the Hogwarts Express, and Potions with Snape to book 4 with the Tri-Wizard Tournament, and finally to the culmination of them all in book number 7 with the Horcrux Hunt.  There is something for everyone in this magical book series. 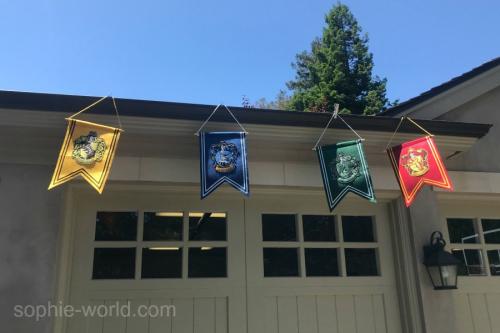 So when a beloved client asked for a Quidditch World Cup party, I was more than happy to oblige.  In discussing the party details with the soon to be 9 year old, I realized that what he wanted was a real, full out, Harry Potter sporting event.  This was to include team try-outs, practice sessions, a round-robin tournament, and the ultimate Quidditch World Cup playoff between the two winningest teams.  I knew right away I was going to need help; lots and lots of able-bodied, sporty, agile team members to help us run this event efficiently, and most importantly, safely.  As with any sporting party, the possibility of injury is always a consideration. Add to that a broomstick, and you've got a recipe for a visit to Madame Pomfrey. 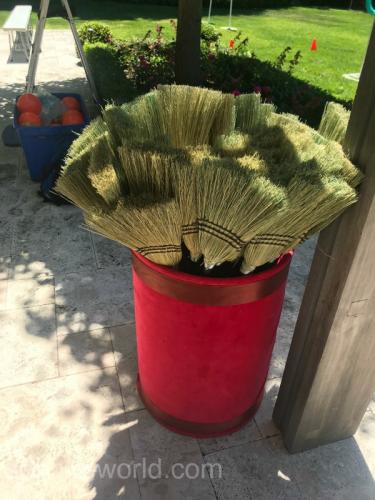 To try (emphasis on the word "try") and keep things as organized as possible, I used the snack break as a time to explain how the day would transpire and answer any questions the guests might have.  Once the kids were fed and watered, we took them to Quality Quidditch Supplies - where each child received a broomstick which they could personalize with runes, decorations, and broom style (everything from Nimbus 2019 to Firebolt - no one, of course, went for a Clean-Sweep). 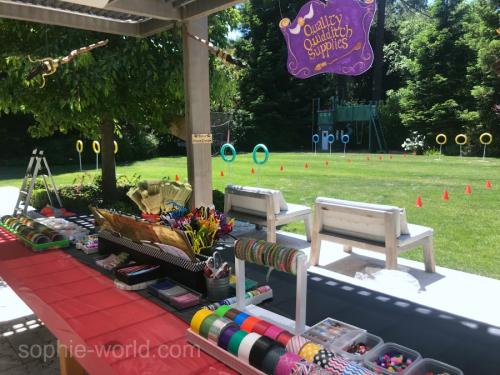 In an effort to allow for hands-free playing we came up with a harness system for the brooms.  This harness secured the broom between the legs, allowing for the player to run full out (albeit with a little broom wiggling that was reminiscent of an excited golden retriever’s tail) and thus allowing them full usage of their hands for catching and throwing the various balls. 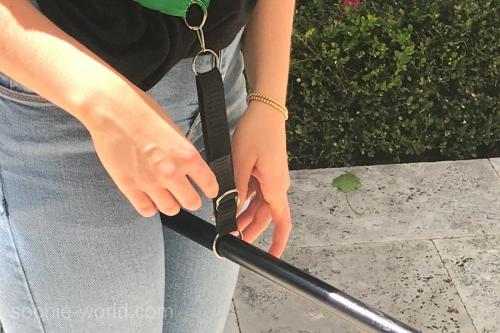 Once everyone had their brooms the tryouts began.  Of course, there was just one glitch - more than half of the kids wanted to be Seekers, the most difficult but also most glorious position on the squad. So we had to devise a way where everyone would get a chance at being the Seeker but also have other roles in between.  We came up with a system wherein every time a goal was scored the Seekers would switch.  Seekers were designated by wearing a wristband that they could easily trade off.  To make things easier to track, all the Seekers were Chasers (the ones who score goals) and were assigned a number so that they maintained order in the switching of roles.

Once we figured out this snafu and divided the kids into teams, we began the playoffs.  Our goal was to have each team play each other, keeping track of the  number of wins per team.  Then, the 2 most winningest teams would face off at the World Cup Finals. 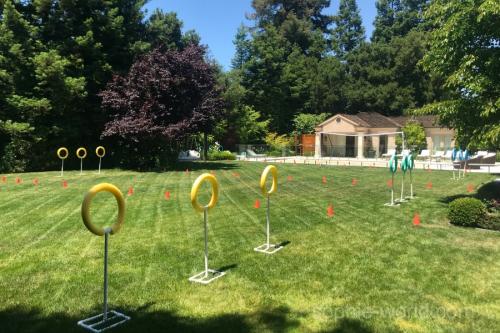 So we could have multiple games being played at once, I had Stephen, my warehouse manager, create 3 separate sets of goals so we had 3 separate fields in play at all times.  Preliminary matches were held on half fields, so that we had space for all 3, however, when we played the final match, we played full field.

Here is how we played: 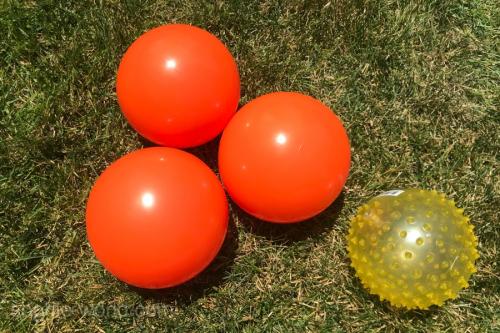 3 Chasers (who is our case were also Seekers) used a yellow spikey ball as their Quaffle.  The object was to advance the ball down the field by both running and passing to other Chasers.   Once in range of the goals, the Chasers would try and toss the Quaffle through one of the rings to score 10 points.  Each time a goal was scored a whistle was blown and everyone came back to the center (much like soccer).  At that point, the Seeker was switched out with one of the Chasers.  However, it is very important to note that ONLY the Seeker was allowed to catch the Snitch.  Once a Seeker became a Chaser they could not go after the Snitch.

The Keeper had the job of not only defending the goals but throwing in the ball should it go out of bounds (the referees would hand the balls off to the Keeper).

There were also 2 Beaters per team.    In Harry Potter's world, the Beaters use bats to control Bludgers. We opted not to use bats.   In our version each Beater was given an orange dodgeball to serve as their Bludger.  The Beaters were the only ones who could wield the Bludgers.  The job of the Beater was to throw their Bludger at other team members.  If a team member was hit with a Bludger they had to freeze for 10 seconds (they counted out loud - "One Harry Potter, Two Harry Potter....). As you can guess this can cause great upheavals as Quaffles can be stolen from frozen players and a frozen Keeper means unprotected goals. 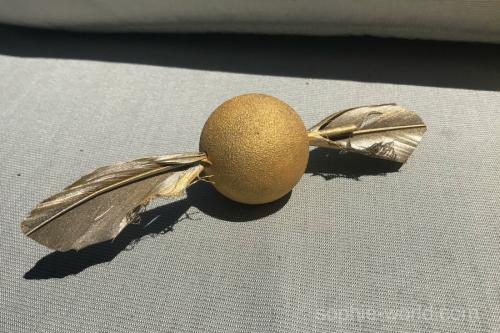 Finally, there was the Seeker whose job was to catch the Golden Snitch.  The player who caught the Snitch would earn not only 150 points for their team, but also end the game.  To make the game exciting and challenging, we designed our Snitch to be shot into the air from a slingshot.  This allowed for the Snitch to literally soar into the playing field.  The most important note about the Snitch is that it must be caught in the air, not picked up from the ground; once it hit the ground, it was out of play.  Add on top of this challenge the fact that our Seekers and Chasers kept switching out, and you've got a very exciting game going on. 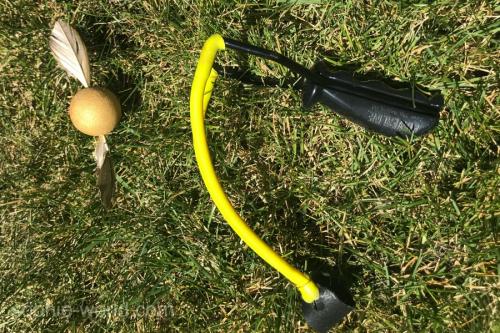 I have to say, the games were exciting.  The kids did a great job of following the rules and it made for some very thrilling play.  There were some very serious, edge of your seat moments where I was sure one team was going to win and then the other team swooped in at the last moment to snatch away the victory.  The games were unpredictable.  I'll admit, there were some tears when teams lost, but those were quickly wiped away once another game began. 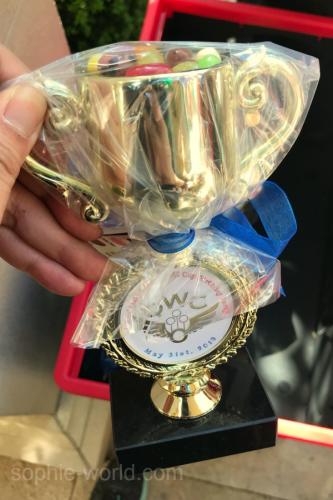 At the end, each team member was presented with a tiny world cup trophy filled with Bertie Botts Every Flavor Beans.  The World Cup Champions were given a larger trophy with an engraved plate.

All in all, it was an exciting party!  The pace was thrilling and heart-stopping.  Just like  a real game of Quidditch! 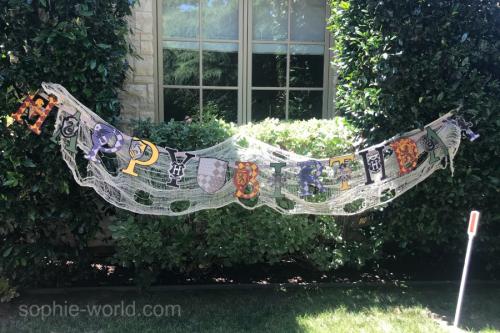 One note for those of you who wish to try this on your own; make sure you have plenty of staff on hand.  You need folks watching the field, watching the goals, manning the whistles, maintaining the Seeker/Chaser switch, and making sure that broomsticks are staying harnessed.  There's a lot to manage and watch, and just like any sporting event. It's fast-paced.  I’m really not much of a sports fan, but after having spent an afternoon playing the game, I've got to agree with Harry, it's "Only the best sport ever invented in the Wizarding World".