Affordable housing in the Bay Area, at what...
Book a Party with Sophie!
I'm a Intellifluence trusted blogger
Mortgaging for my Future?
Did you receive your letter from Santa? 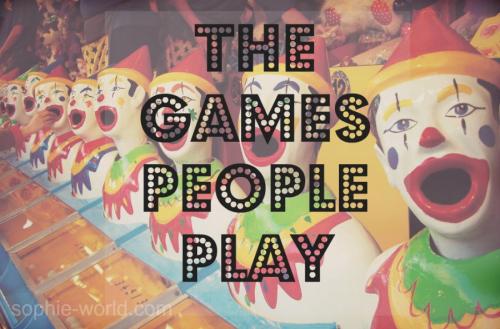 I know that I’m always saying how much I love my job, but there are so many different aspects of what I do, and all are such joys, that you’ll just have to excuse me for sounding like a broken record!

This weekend we had an amazing party with one of my dear clients who’s been with me for years. She’s been through three of my office assistants with me, so that says a good deal right there! Since she’s one of my older clients, I did an actual “sit down and plan” session with her and her son to figure out what he would like to do for his party. Mind you, this is no ordinary seven year old who just says, “Uhhh, I’d like a superhero party,” or “I want a jumpy house...” No, this kid had a full-blown, out-of-the-box party idea that just needed a little honing and shaping. When we sat down for hot chocolates in Laurel Village two months ago, I could see the wheels spinning in his head. His idea? “Come As Your Favorite Sports Star Carnival!” His vision was to have his friends dress up as their favorite sports figures, play carnival games that represented each sport in some way, then play some group games that he’d created himself.

The costume part of this party begged for a photo session, so we set up a little photo area where we took the kids’ photos and printed them on the spot. (If you remember my rant about Kodak and Polaroid, you’ll be happy to know that I found a Canon printer that does a really nice job with instant photos.) You have no idea how cute these seven-year-olds were, all dressed in their sports attire! They were also given a name tag which had three different elements on it besides their name: a colored border (either red or blue), a number 1 through 15, and either a baseball or soccer ball image. The idea is that this would give us three different ways for dividing the kids into teams. We could go by color, number (odds and evens), or sports ball. This way the teams could be different each time, and there would be no hurt feelings. The kids were also guaranteed to play with their friends during at least one of the games.

The carnival games consisted of...

1. Paintball shooting range: we discovered this less scary, much safer, hand pumped, paintball gun that doesn’t use compressed air. It actually has a good amount of power, but it uses water soluble paint balls so the splatter cleans up pretty easily. It’s called the “Splatmatic Pistol". Yes, I do admit there were a few raised eyebrows, and one father pulled me aside to make sure we were proceeding with safety (which we definitely were!). But the boys loved it! 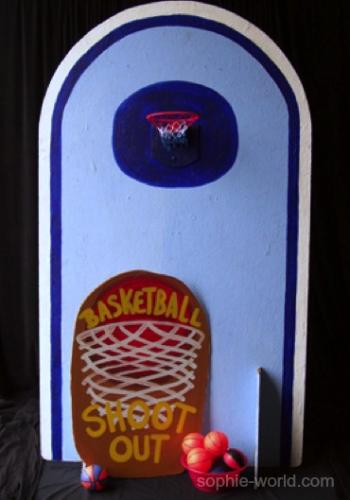 3. Hockey shootout: which consisted of a painted goalie cut out and a relatively small space for the puck to shoot through 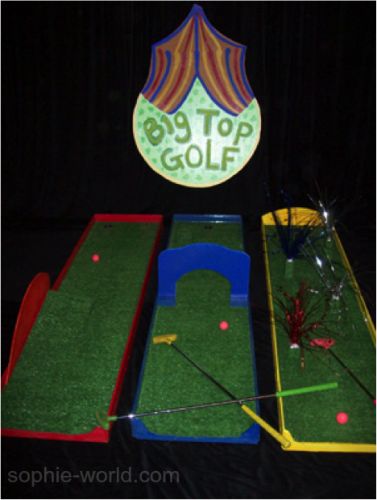 4. Mini golf: where you had to make a hole in one 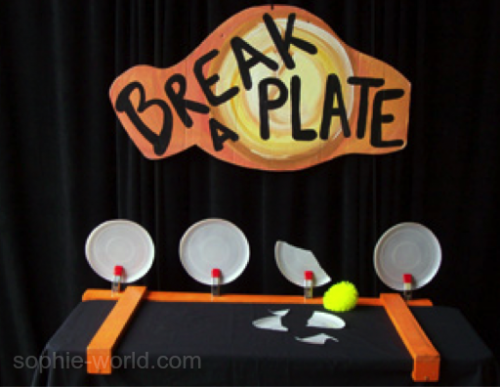 5. Baseball break-a-plate: which is always a hit (if you’ll pardon the pun!)... I mean, who doesn’t love the sound of shattering plastic plates? 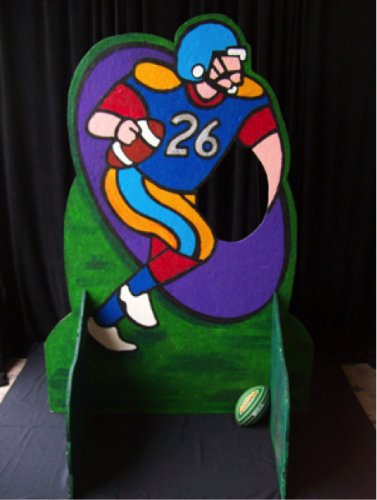 7. Soccer ball bowling: where the kids kicked a soccer ball to knock down bowling pins

Kids were given the challenge to accumulate 35 tickets, which the could later trade in for their goodie bags. Kids love collecting tickets! Some collected theirs rather quickly, so I gave them a second challenge of seeing how many tickets total they could each collect. The one with the most tickets would win a special prize (a Warriors pennant that I had as part of the sports decor).

Now comes the kicker (sorry, another sports pun for ya!). After all the tickets were counted and recycled we headed outdoors to play group games. Both of the games we played were inspired and created by the birthday boy. Thankfully the weather held out just long enough for us to play! Literally the minute we went in for cake, it began to pour!

The first game was called “angle biter hockey,” which was like normal hockey except each kid had a balloon attached to their ankle. The rule was that if your balloon popped (either by yourself, the grass or an opponent) you had to go to the penalty box and stay there until your balloon was replaced by one of our staff. To facilitate the process of tying a balloon to each kid’s ankle, I actually used a fabric hair scrunchies (which I bought in bulk at Target) and tied the balloon string to the scrunchie. That way the boys could just slip the scrunchie over their shoe, which was much less cumbersome than tying a string around each kid’s ankle. The game was a hoot, with lots of racing to the penalty boxes for new balloons. In fact, I think it became more about seeing how many opponents you could get out, rather than how many points you could actually score. The best strategy was definitely to pop the goalie’s balloon!

The second game is the real impetus for writing today’s blog. It was completely created by my birthday boy, and was actually so much fun that I think it needs to become a staple at my sports parties from now on! I think it would work best when played with 10 or fewer kids -- but we had 21 and it was just fine!

We call the game “Mash-Up Baseball,” and it’s a bit like baseball with an obstacle course thrown in...

Here’s how you play. 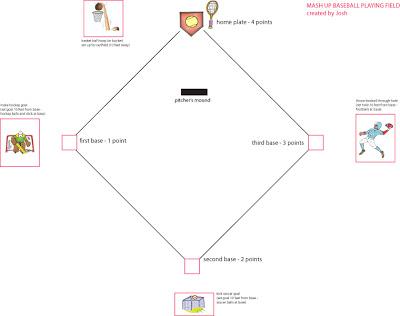 Supplies
4 baseball bases (or anything to serve as a base - paper plate, hula hoop, sweatshirt...)
2 goals (large open cardboard boxes or laundry baskets on their sides can work for this)
1 self standing hula hoop (either hung from a tree, or duct-taped to a folding chair)
1 basketball hoop (or bucket)
1 lightweight play ball (smallish, plastic kind that you can find almost anywhere, about 5 inches)
1 tennis racket
1 or more soccer ball(s)
1 or more football(s)
1 hockey stick and ball(s)

Set up
Everyone is given a number 1 through however many kids you have (in our case, 21). The number and name are recorded on a sheet of paper or on a scoreboard (we used a big white board).

The playing field
Set up like your standard baseball diamond, except that at each base there is a sports challenge. (You will need an adult to man each base and reset for each at-bat person)
1st base: shoot a hockey ball at a goal
2nd base: kick a soccer ball at a goal
3rd base: throw a football through a hoop
Home plate is just home plate

You will also need either a basketball hoop or a bucket set up about 10 feet to the left of home plate (this is for the outfield).

How to play
1. Everyone, except the batter, spreads out in the playing field.
2. The pitcher underhand pitches a small ball to the batter (if everyone wants to pitch then you can arrange it so that the next player up in the batting order pitches - that way it will rotate through easily and everyone will get a turn)
3. The batter uses a tennis racket to hit the ball as hard as they can. (Standard baseball rules apply on fouls and strikes.)
4. When the batter hits the ball, he runs to first base where he must make a goal with the hockey stick (player can not advance until the goal is made). Once he makes it, he runs to second base where he kicks a soccer goal. Once he makes that, he runs to third where he throws the football, and after completing that he finally can run home.

Meanwhile, the outfield fields the ball this way...
5. Once the ball has been hit, the kids in the outfield must catch the ball, and complete five full passes with the ball. If the ball is dropped the catch doesn’t count. Each toss must go to a new player (so everyone gets a turn). The fifth person to make a complete catch then runs with the ball to the basketball hoop and attempts to shoot a basket. Should the player miss, the whole thing starts again, with 5 catches needing to be made. However, if the player makes his basket, the batter stops.

6. The batter is given points for each goal he has made (meaning if he gets to second base but hasn’t made the goal yet, then he only gets 1 point). Sadly, if he is on first base and doesn’t score a goal, he gets zero points.

7. The batter’s score is recorded and the next person comes up to bat.

8. Play continues until everyone has gone up to bat. (That is the official end of the inning). Play just one time through, with big groups, or play innings with small groups. The goal is to see who can score the most points.

I have to tell you, it’s a very exciting game, and I almost screamed myself hoarse playing this weekend. It’s very thrilling watching the outfield trying to pass and catch the ball and then shoot on the basket. It was really a lot of fun. I know it may seem complicated, but once you start playing it’s a blast.

Once everyone had batted, we packed up our team and went in for cake. I think the boys were pretty impressed that the birthday boy had created his own game. It was one of those special added touches that makes birthdays so much fun.