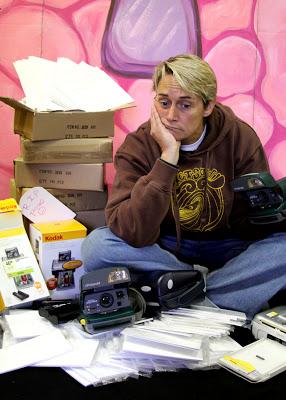 I know how it is: major corporations are always trying to make more money. I get it – they have investors, they have employees, they have houses in the South of France to buy… But why, why, why must they constantly “upgrade” their products? As my granddad used to say, “If it ain’t broke, don’t fix it!”

Does anyone remember the Polaroid camera? I have seven of them, along with the mini version, the I-Zone, which made neo-print-sized photo stickers.

In my biz they’re a wonderful tool! They have sooo many possibilities: personalized paper dolls, personalized ID cards, instant celebrity shots, photo albums, scavenger hunts… I mean seriously, I used to go through at least twenty packs of Polaroid film a month!

The trigger for this rant comes from the fact that I recently went to buy ink and paper replacement packs for my Kodak Easy Share printer (something I was forced to acquire after Polaroid dropped me like a hot potato). The Easy Share printer is a really small, pretty high quality, relatively quick printer that was perfect for parties. We’d take digital pictures of the kids, slip the memory card into the printer’s dock, and have them printed up by the end of the party. It was a great little replacement for the Polaroid camera, and I could even download the photos after the party and send them to my clients.

My panic began to take hold when I was on my way to an event and stopped by my local Staples to pick up a pack of paper and replacement ink cartridges. I was informed by the very friendly worker that they were “out of stock” and wouldn’t be coming back in… ever. I started to hyperventilate. I was about to go to an event where I needed to print up about twenty photos, and my little printer was flashing the “replace cartridge soon” button like a Vegas sign. I tried three more office supply stores, only to be crushed by the undeniable truth: they were discontinuing my printer along with all of its necessary products.

By the grace of God (I said a whole lot of silent prayers at that party!) I was able to get the photos that I needed printed. I did have to send one mother, who wanted multiple copies of her child’s photos, away with the promise that I would send her the digital copy via email, but at least each kid got their take-home goodie. Seriously, I was sweating that one… As each photo came out, I’d chant in my head, “Come on baby, just one more, come on baby, just one more…!” Which is about the same time a latecomer would walk in and I’d have to add, “Okay, one more plus one more!”

It’s really scary to me that we live in such a disposable society. Companies just replace products from year to year, forcing the consumers to “upgrade” or “re-buy” what they already have because they can no longer get the supplies. I see it with software, printers, almost everything in the tech industry…

What’s really annoying is the supplementary items (special sized Polaroid picture frames, extra packs of photo paper, etc.) that have now become obsolete. The monetary investment there is mind boggling! I guess I’m going to have get creative and come up with some sort of craft to do with all of it - unless someone out there wants 500 Polaroid frames for cheap!

I’ve since learned that Fuji has come out with an “instant” camera, but I just don’t know. I mean, I got sucked into buying one of those Pogo printers (Polaroid’s replacement for their original masterpiece), which was one of the most bogus, overpriced pieces of hardware I have ever experienced. I’m a little hesitant to plunk down $150.00 just to find out that it doesn’t work for my needs. And then, let’s just say that it is a good camera, and it fills me with bliss and happiness? How long will it be until the big corporations decide to yank it from the market?

I'm just not sure I can handle the inevitable heartbreak! 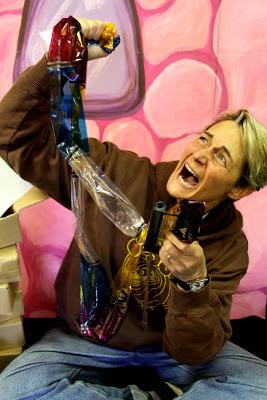