Mexico is an amazingly inventive place. If people don’t have something at hand (which is often the case around here), they come up with some other way of doing it. Usually it involves something precarious, or maybe even a little dangerous, but hey… They get the job done!

While I was in Mexico, I had a couple of MacGyver moments that I thought were worth sharing.

A dear friend of ours recently passed away, and we decided to have a memorial service and party to celebrate his life. Being the party planners, my husband Scott and I were in charge of the setup. We had a nice video that Scott had made, a fun memory board I put together, a sign-in book, and lots of food and drink. It was going to be a really nice affair. 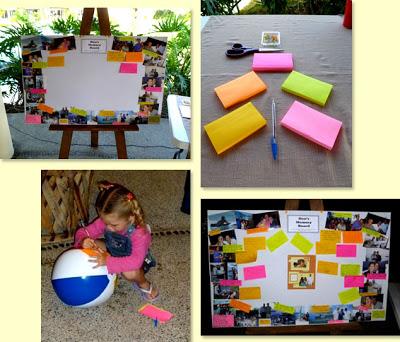 The one thing we had to do, though, was run power from one location (the women’s bathroom), across the palapa (a huge, open-air umbrella-like structure made of wood and palm leaves) about 50 feet to the TV/VCR setup where Scott’s movie was to play. Now remember, we didn’t have any of our tools or anything we were used to working with…

The pretty palapa, day and night

So here’s the scene: I’m up a ladder in the fringes of the palapa trying to secure the extension cord, but of course, it kept flopping down and looking really unattractive. If I’d had my tools, I’d just take a piece of rope or wire and secure it around the wooden frame of the palapa. It’s really not a hard thing to do, but I just didn’t have the tools!

Well, you got it – a MacGyver moment struck me. I may not have had any rope, but I did have lots of plastic bags! (Mexico is big on plastic bags – California environmental groups would be aghast!) The bags, when cut in half, made amazingly strong and flexible bindings. Extension cord secured in ten minutes flat!

Then the next day, Scott and I had volunteered to cook for the local food distribution program. It’s a great program that feeds a hearty breakfast to about 120 kids and adults in the neighborhood. It’s really fun, and a great way to meet folks.

The problem was that we were peeling and dicing potatoes by the pound, but didn’t have a bowl large enough to store them! So yes, another MacGyver moment! I took one of our ten-liter water jugs and cut it in half! Not only did one half make an awesome bucket, but the other half made a great funnel, too!

I guess I have to change my motto about fixing anything with duct tape. Now I would have to say, “You can fix anything in Mexico with just a pair of scissors!”
© SOPHIE'S WORLD LLC