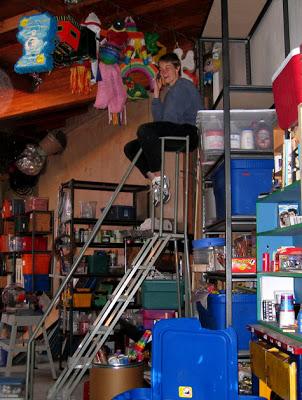 I have a thing for ladders.

I must admit, I get really nervous when people who work for me get on them -- even though the only real incident I've ever had with an employee getting hurt was when a ladder actually blew over in the wind and hit him! Still, ladders and employees make me nervous, so I try and keep the on-site ladder ascensions to myself, but when I mount them... I'm fearless.

I personally have never been afraid of heights, and even when I was two years old, I'd climb on things much taller than myself: chairs, tables, china cabinets. Case in point: somewhere in the family archives there are pictures of me at a really early age in a frilly dress (which is a pretty strange sight, in and of itself!) hanging from the middle of a jungle gym climbing structure behind the church where my Aunt Joey got married. I'm sure I'd made my escape when everyone was making their way through the receiving line. They found me hanging there, about four feet from the ground, in the middle of the jungle gym. My legs were dangling, and though I was completely unperturbed, I was apparently unable to move forward or back. I must have run out of steam! Someone eventually helped me down.

The same aunt had to suffer the humiliation of my climbing abilities later in life as well. She had taken me shopping at the local department store, and lo and behold there was an amazing display with Pooh and Piglet in a giant hot air balloon! Now seriously, people -- if you have a rope ladder dangling down from the basket, don't you think you are inviting children to climb up it? My poor aunt was alerted to my deeds via loudspeaker: "Would someone please come claim the child in Pooh's balloon?" For some reason, security didn't seem to find it as funny as I did...

When I was a kid, my dad erected an eight foot tall play structure that all the local kids loved. Our biggest thrill was climbing to the top and jumping off, and I loved swinging as high as I could on any swing and then launching myself into the sky. In high school, I took on the role of Winnifred the Woebegone in "Once Upon a Mattress" just so I could jump around on the high stack of mattresses!

I wish that back when I was a kid we'd had cool things like climbing walls, rope courses, and trampoline zones -- I would have been all over that! I look at all the climbing advantages kids have today, and I'm actually jealous. I remember clearly the day we got to repel off the back of the high school football stadium in gym class. That was sooo cool...

Which brings us to ladders.

I've been known to do some stupid things high up in the air in the name of fabulous decor. Stacking a ten-foot ladder on a three-foot table in order to get 16 feet up to hang a disco ball... Or practically hanging from the branch of a palm tree to place a Christmas orb... Or standing on top of a rented Penske truck to hang a ten-foot entry sign.

Of course, the thing is, if you go up and down a ladder as many times as I do, you're bound to fall off a couple times. It's just the law of averages, right?

The amazing thing about falling off a ladder is that it seems to happen in slow motion. One time I was working in my warehouse with one of my assistants. I was on a big rolling stair ladder, reaching for something that was just a little beyond my grasp, and I tipped the stair unit. But instead of crashing down, it sort of drifted down, and I was able to right myself and sort of hop off before it actually hit the ground. It was pretty freaky -- kind of Cirque du Soliel-ish. It did shake up my employee so badly that she had to go home... I'm not sure why... I thought it was kind of fun!

There was another time when I was hanging decor at a club and literally fell from the top of a twelve-foot ladder and sprung up again like a cat. I guess I was thinking that I didn't want the folks at the club to see, but I jumped up so quickly that if you hadn't been looking you would have never known it happened. I just sort of appeared at the bottom of the ladder, when seconds before I'd been at the top. It was my accidental magic act! My sister, Freda, of course, caught the entire thing and later confessed she was mystified that I hadn't hurt myself.

Perhaps I am just one of those blessed souls who's on the good side of the Ladder Gods, or perhaps I have a really, really good guardian angel... Whatever the case may be, if you've got something to hang, I'm your girl... Just don't watch!