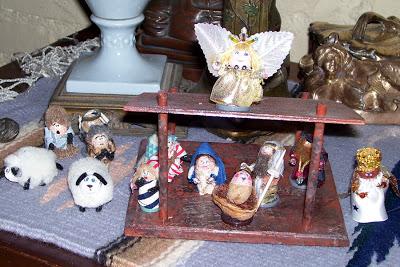 Do you know what a crèche is? For those of you unfamiliar with a crèche, it’s a tiny representation of the birth of Christ in a stable. A crèche really only needs four elements: Mary, Joseph, a manger, and Jesus... but more often than not you will see a full set that consists of livestock (the donkey was always my favorite!), shepherds and sheep, an angel or two (usually one with a horn), and the three wise men (who may or may not come with assorted camels, servants, and piles of gifts). I remember when I was a child, one of the supermarkets was giving away a collectible set. Each week there would be another figure to buy (or to get free with a purchase over a certain amount). I loved that!

For my family, the crèche was a huge part of the Christmas celebration. My Pop had a beautiful crèche that he made himself. It had a two-story manger, made out of weathered and worn wood. There was a little light and real, tiny bales of straw inside. A couple of weeks before Christmas, my Grammy would retrieve the dusty box from the basement, and I was invited over to help her set it up. Her kitchen would smell like warm, spiced apple cider, and Christmas carols would be playing on the radio. We’d drink eggnog as she’d lovingly unwrap each piece and let me place it wherever I saw fit. We’d go through many versions, with some stagings showing the shepherds elbowing out the chicken or calf in order to get a closer look at the baby Jesus. (I always liked giving animals priority over the people!)

I myself had a tiny miniature crèche that I think I got from Woolworth’s for 99 cents. It was my own personal crèche, complete with a six-inch wooden manger that served not only as the backdrop for the scene, but as the storage place for all the pieces. I remember distinctly that my cow had a sort of club hoof, which caused him to fall over... I used to wedge him in the back between the manger and Mary to make sure he didn’t look like he’d fainted away at the appearance of the angels.

On my husband’s side, the crèche was equally huge -- literally. When my mother-in-law went through her ceramics phase, every child (there are four all together on my husband’s side) received their own massive collection of hand-painted pieces. No character was left out. I even think the innkeeper and a few nosy neighbors were included! Scott, being the reverent soul that he is, decided that our own crèche needed a little gussying up, and added assorted miniature football helmets for everyone... Jesus, of course, was an Eagles fan. 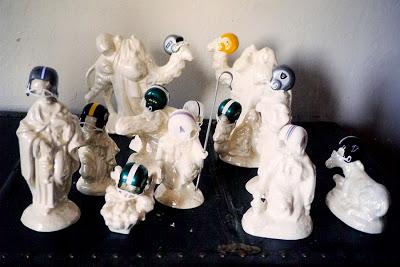 And so it was that many years ago, when I had much more time than I had means, I made three little peanut crèches. Those are exactly like they sound: a crèche with all the characters made out of peanuts. I remember sitting at my tiny kitchen table working on each one, and although I made three of each character at a time, no single set was the same. Each figure had its own personality.

I painted each peanut figure with acrylic paint, then sealed it with varnish. I glued on pipe cleaner arms before embellishing them with scraps of fabric and trim so that they could actually hold things, or get expressive in their movements. I remember cutting off the tips of an old pair of woolen gloves to make tiny beanie hats for the shepherds. I know, they probably didn’t have beanies like that back in the day... but hey, at least my peanuts’ heads were warm! 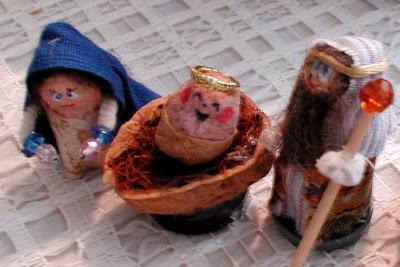 I think my favorite figure is the baby Jesus, who is made from a single peanut, painted light pink with a big smile and a tiny paper towel diaper. He just looks happy to be there, not somber and serious as depicted in most Catholic crèches. Next to the baby Jesus, the sheep are my favorites. I used a tiny strip of fuzzy carpet for each one, so they turned into these chubby, round balls of fluff that rival anything you’d see on Wallace and Gromit. 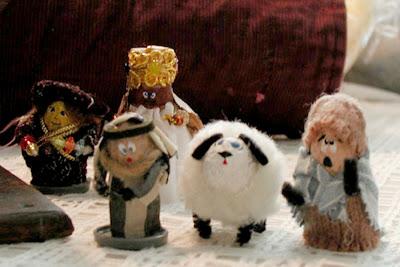 I had so much fun making those crèches. It circles me back to a belief that has been strongly growing within me for some time: it is not the expense of the gift, but the love put into it that makes it special and retain its value.

I made the crèches for my mom, my mother-in-law, and my little next-door neighbor Iris, who was two at the time. To this day, I receive an email every Thanksgiving from Iris’s mom Heather, telling me that the peanut crèche has made its appearance. I get a yearly update on how it’s survived the year in storage (Joseph has lost his base, and it appears that Jesus’s walnut shell bassinet has been misplaced -- but other than that the crèche seems to be holding up well). To date, no one’s crèche has been consumed by fuzzy friends or mold -- which I view as a good sign of the crèche’s lasting value. Either that, or the confirmation that the peanuts inside the shells have become totally petrified! 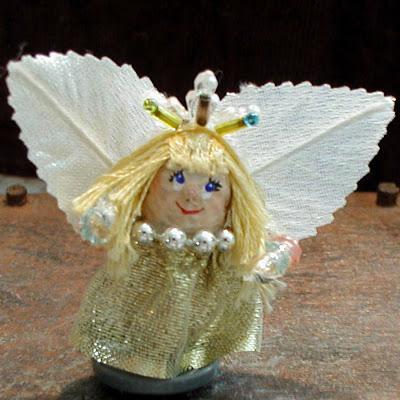