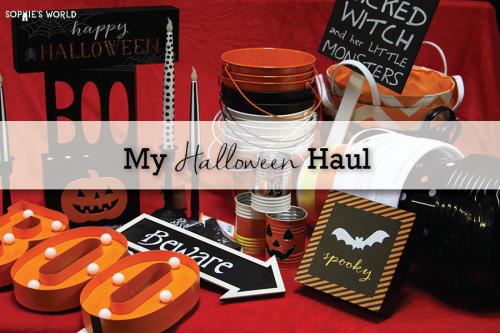 I have been doing Halloween parties for well over 20 years now.  Over the years I’ve purchased some amazing stuff.  I’ve also discovered that some years are better than others for Halloween decor. There have been years where nothing new or exciting has come out. The items are cheap-looking knockoffs or a year behind the trends.  Those for me are depressing years. Sadly, last year was one of those years.

However, I am very, very happy to say that this year is making up for the paltry offerings of 2014.  In fact I would call this year an off the hook year for decor!  Fun stuff started arriving in stores mid-September. Knowing it is always best to snatch it up early, the second bathroom in my warehouse rapidly became a storage space for brand new spookiness. I am so excited about some of these items, I thought I would share.

Fancy decorated pumpkins - Thanks to Martha Stewart, pumpkins aren’t just decorated with cut out faces anymore.  In fact, the emergence of the non-carved pumpkin started a serious trend in the pumpkin world.  People now paint, embellish, stack, and bling pumpkins with everything from chalk paint to glitter. 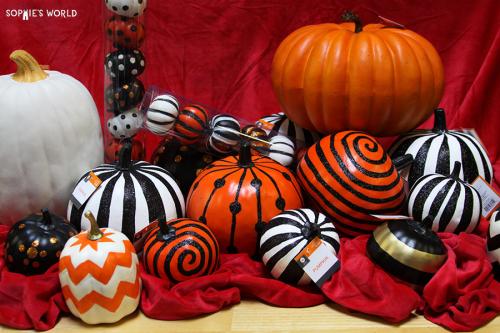 Sturdy, articulated, skeletons - I have a ton of skeletons, ranging from hard plastic minis (whom I’ve always referred to as my Halloween Barbie Dolls) to life sized blown plastic ones.  Over the years I’ve tried all the different types. Sadly, most of them shatter with time.  Storage seeme to do them in.  However, this year I found a reasonably priced skeleton.  He is about 5 foot 6, with molded bones that are anchored together with brackets and screws.  The best part about him is that you can move him at all of his joints, so you can really pose him.  So far he is bearing up well to being stuffed in the bathroom. We’ll see how he fares in and out of the back of a U-haul truck this season. 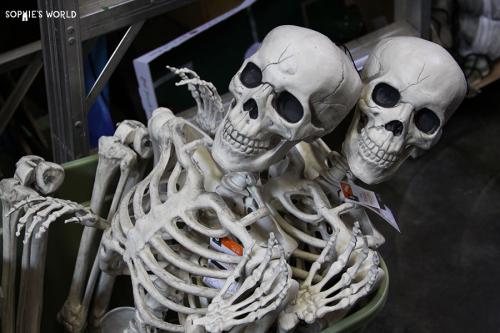 Animal skeletons - 3 years ago I picked up this funny skeleton dog that barked and chatted about being “thrown a bone, every now and again”.  Since then our animal skeleton department has expanded.  I was able to find several breeds of dog, a cat, a bird, a rat, and my favorite, a crocodile skull.  These are going to be an awesome addition to my mad scientist lab! 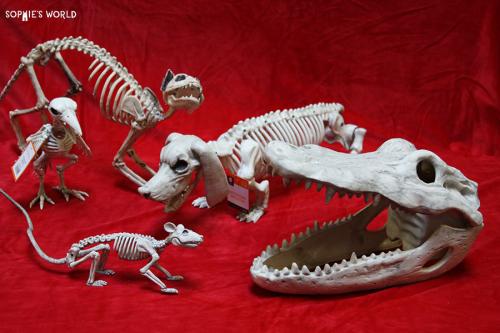 Animatronics are are always fun.  Mirrors where creepy faces appear, hands that move when you come near them, crystal balls that reveal your future.  But my favorite find this year, is an old fashioned telephone that rings until you pick it up. Once you do, a creepy voice tells you that it’s right behind you. For some reason, I just this off-the-hook scary.

Cute containers and signs - The dollar section at Target reaped a huge harvest of adorable treat holders this year.  In my local store, I found big candy corn buckets, adorable tin can pencil holders, fabric buckets, and wooden signs with fun sayings like “the witch is in” and “ zombie’s crossing”.  These items are going to be great for giving food tables that special Halloween pop. 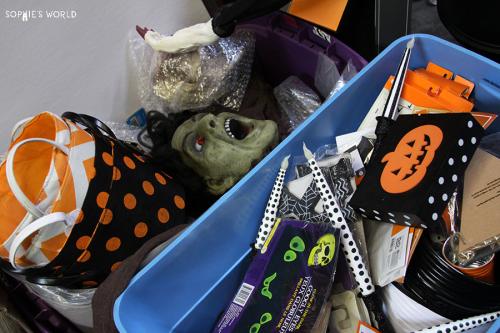 My only disappointment this year is that I didn’t order the “breakthrough” ghosts from Martha Stewart’s Grandinroad catalogue the minute it showed up in my pile of mail. After this many years in the biz, you would have thought I would have spied the runaway hit of the season and grabbed it.  I should have realized that ordering the last week of September would be too late.  I’ll just have to wait until next year.  I know by then I’ll be settling for an inferior version. But you know what they say, when you see something you like, grab it - even if it is ghost and your hands go right through it!