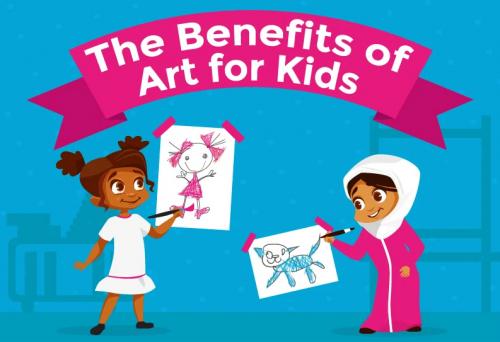 I was one of those incredibly lucky kids who grew up in an era where the "arts" (and when I say this I include things like metal shop, sewing, cooking, screen printing, woodworking, music, and visual arts) were all part of our curriculum.  This was the days before coding, so as kids in middle school, we were given the opportunity to try everything from baking cinnamon rolls to oil changes (and if you don't think that's an art, stop reading right now!).

This was an era when kids were given ample opportunites to express themselves.  There were poster contests for various local events (that actually got used in town), there were parades where we built the floats and our marching band played the music, there were Auto shops in schools where teachers brought their cars in for the above mentioned oil changes.  Sports were for fun and exciting school rivalries, AV club was for those special individuals with an understanding of conductors and sound waves, and theater was for anyone who wanted to get in front of a crowd.  It was a wonderful childhood.  If you are having a problem envisioning this, watch "Stranger Things", but take out the Gorgons and the Upside Down.

For me personally, this was coupled with a grandmother who was a teacher who believed in the "play school" teaching method ("through play, children learn"), a grandfather who was a storyteller, an aunt who was a puppeteer, and a mom and dad who were both artists.  Add it up and you get...the luckiest girl in the world.  Which is why, as an adult, I do everything within my power to take art to local neighborhoods and schools.  Why?  Because the arts programs in most school systems have been decimated.  I agree that science and technology are important elements in our education. But so are the skills that come only from the arts.  A kid who is exposed to the arts will have a better concept of thinking outside the box than a kid brought up to believe that scissors are an object with which one is "not meant to run".

The good folks over at Mom Loves Best feel the same way. They have compiled an amazing list of reasons (35 in fact) why art is important.  It doesn't matter if your child is the next Picasso. What matters is that they dig in, learn to explore, learn to engage, and learn to play with materials.  Children need to learn the limits of a soap bubble, learn what it means to get messy, learn what it means to cut, to chisel, to whittle, to bond....that's what childhood is.  Childhood is using a glue gun and realizing you don't touch the tip because you get burned.  It's using an Exacto knife and learning you don't pull it towards yourself or you get cut.  It's life lessons that make you smarter, more aware, more connected, more tangible, more real....

Don't get me wrong...technology is wonderful.  But have you ever taken a piece of paper, folded it, cut it, opened it, and seen the magic of a snowflake appear?

I know, I know...many of you may be saying, "Sophie, wake up, we have seen the future, and the future is technology".  And I say, "NO", the future of the world is putting down the phone, picking up the paintbrush, sitting next to another human being, and creating a future that includes one another, not a cyber buddy.

I know I'm old fashioned, but the folks over at MomLovesBest have compiled an amazing amount of data that supports this thought process. This is why I am hoping you'll hop over to their site and see what they have to say.  The amount of data they have gathered is staggering and much more analytical than my emotional rant.  I  hope you'll join us in our crusade for bringing art back to the schools and to each child (and adult) that desires it.

Remember, it's not the end product but the journey getting there that creates the memory.  When all is said and done, what would you like your child's memory to be?  Studying and cramming for some standardized test?  Or using a cereal box, scissors, tape and paintbrush to create a masterpiece that they value much more than anything from an Amazon box?  I implore you to take a risk.  Don't expect your school to do the work for you.  Take the time to connect, through art, with your kids.  You don't have to be perfect...you just have to try.  And be willing to find humor in your fails.  Because only through the fails do we learn.