So You Want to Be an Influencer?
Big Events, Little Kids
TeachYouToSew.com | You Made It! I Love It!
Wrapping Up the Holidays
The Elf on the Shelf - Caught on Cam! 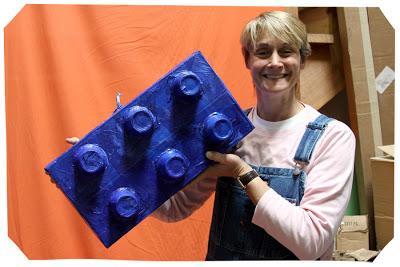 I’ve got a  Lego-inspired party coming up this weekend, and it’s the birthday boy’s wish to have a brick-shaped pinata. Normally when it comes to pinatas, I just take a trip to my local party store and pick one up. But a brick-shaped pinata was a little more difficult to find. So, I decided it might just be easiest to make one of my own, and since I’m going to make it, why not share it?

The Lego brick is an iconic toy, and the best shape to represent the theme of the party. I mean, it’s the foundation -- literally! -- of all that Lego has built its empire upon. Plus it’s really darn simple!

To start, I needed a thin cardboard box big enough to hold all the candy bags loosely.

When you have what I call a “whack ‘em” pinata (the traditional kind that is hit with a stick), there tends to be candy breakage. That’s one of the reasons I advise against having hard candy such as Ring Pops, candy necklaces, and lollipops in a standard pinata.  I try to stick with chewy and chocolate candies for my more man-handled pinatas. I should also let you in on a little secret I’ve learned over the years: place all the candies in baggies. That way everyone gets the same candies, and there isn’t that elbow-to-the-eye mad scramble that usually leaves at least one child in tears, one child hoarding every Snickers bar, and more than one dazed child left with an empty goodie bag. It also saves you from that scary moment when kids try to grab the few premature pieces of candy that drop while your eight-year-old slugger is still swinging away, bat in hand.

But back to the pinata itself... 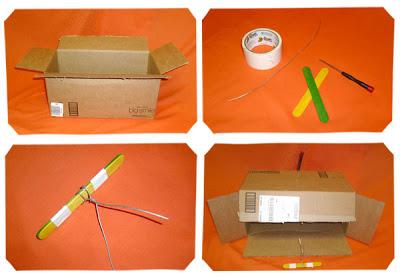 I chose a good-sized, thin-walled, rectangular box, about 18 inches by 24 inches by 12 inches. To make the hanger from which I would string up the pinata, I punched a hole in the middle of one of the long sides of the box using an awl (although you could also use a Phillips head screwdriver or ballpoint pen). Using some wire (heavy twine also works), a few taped-together tongue depressors, and some duct tape, I created a hanger for the pinata. I twisted the wire around the depressors, then fed it up through the hole in the box and taped the tongue depressor into place on the inside of the box with some more duct tape. The tongue depressor helps to keep the hanger from ripping through the cardboard box top. I twisted the loose ends of wire to form a hanger loop and taped them with duct tape to ensure there were no sharp edges. 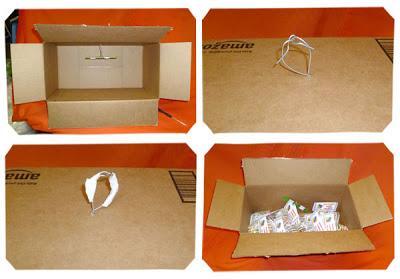 To make my life easier, I made the candy bags ahead of time and placed them in the box, then taped it shut with packing tape.

I then glued on two rows of “studs” (yes, that’s the official term for those little bumps on a Lego block) using my glue gun and 4-ounce plastic condiment containers. We use these containers for everything, so I always have them on hand. I get them from Smart & Final in packs of 100, but you can find them at delis, taco stands, and other takeout places that have things like salsa or condiments. You only need a few, so I bet it you’re pleasant and ask nicely, they’d let you have six or eight. 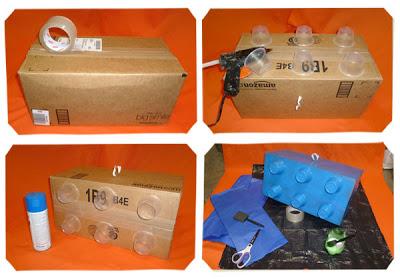 After the studs were set in place, I spray painted the whole thing. I opted for a bright, bold blue, keeping with Lego’s primary color scheme.

When the paint was dry I covered the entire pinata in layers of blue tissue paper. I used a mixture of glue and water (one part glue, one part warm water) to adhere to the paper. I just cut the paper into big strips, painted a bit of the mixture onto the box, put a strip of paper down, then painted over it with more mixture. On the studs I used smaller strips so they didn’t become bumpy and lumpy.

I gave the pinata two coats of this decoupage, and when it was thoroughly dry, it looked great! I have no doubt in my mind that this pinata is going to be a big “hit” at the party!