I’m a huge Harry Potter fan!  So it’s only natural that one of my favorite parties to throw is based on the beloved series. Thankfully, the books never seems to lose their popularity. Like The Wizard of Oz or The Boxcar Children, it’s a series that continues to find a new audience year after year. 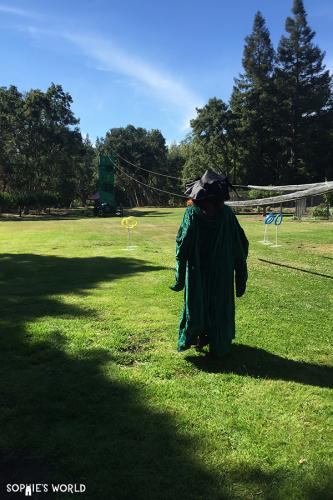 As a party planner, I always try to create the ultimate experience for my birthday clients.  You can imagine how my brain started ticking when this particular birthday girl requested Quidditch tryouts. She was completely taken by the notion of actually flying and catching the golden snitch. It became my next week's work to figure out a way to make her desire a reality.

I considered all the options for capturing the feeling of soaring - safely.  I thought about a swing. I thought about a rope tied to a tree branch. Then it came to me.  What we needed was a zipline! Here in California you can actually rent a portable one.  However, if you just so happen to have a zipline in your backyard or at your local playground (some have those metal handle type built into the structure) those would work just as well. 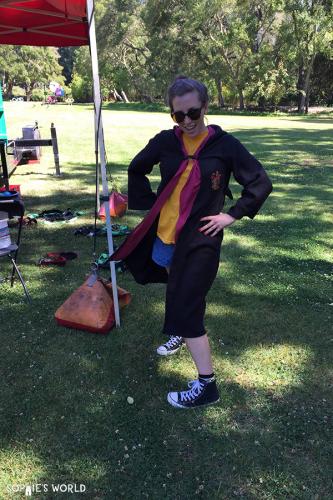 My assistant Jessica ready for her tryout

Now, I knew we needed goals - and so I built very simple self standing structures out of PVC and pool noodles.  You could always use a hula hoop.  These are the materials I used and my diagram. 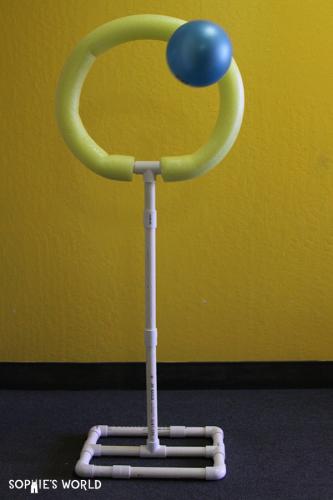 1 - pool noodle with a hole through the middle 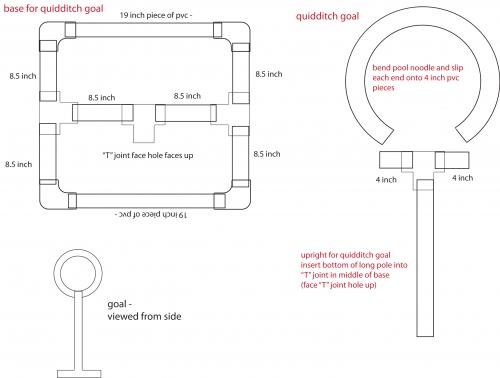 I placed the goals midway on either side of the zipline (so both left and right handers would feel at ease).

When the guests arrived they were told we were having tryouts for Puddlemere United (one of the Quidditch Teams mentioned in the series).  Everyone was given the opportunity to fly a few times without balls just to get the feel of the zipline.  Once everyone felt secure, we added the balls.  It was tough.  You had to get just the right angle to make a goal, and there were many close calls - just like in real sports.  Beater tryouts were a little easier as the flyer simply had to try and knock away balls being thrown at them as they zipped down the line - like a flying version of dodgeball.  Seeker tryouts were pretty tough as well, as they had to catch a ball while they were flying (it reminded me of that pool game where you jump from the diving board while someone tosses you a ball). 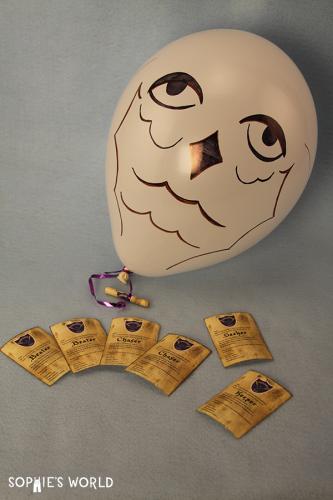 To top off the adventure, during cake time, I had acceptance letters delivered via “owl post” (helium balloons with sharpie drawn owl faces and little scrolls tied to the ribbon).  I made sure to listen very carefully while the kids were in line, to figure out what position they were hoping to claim.  Thankfully, I had a great assistant who was able to help me keep track, and all of the guests were thrilled with their positions!

At the end of the party, the birthday girl gave me a big hug - which was a sure sign that we had made a little magic of our own.