The amazing thing about being in the party business for sixteen years is the number of kids I get to see from year to year. I get to watch them grow up, and that’s really quite a treat for someone without children of their own. This weekend I was doing a bar mitzvah, and two young ladies came through the door and stopped dead in their tracks...

“Hey, aren’t you the party lady?” said one girl. “You did my dalmatian party when I was like six!”

“Oooh, didn’t you use to sing the watermelon song?” chimed in her friend.

I smiled and blushingly said, “‘Down by the Bay’ -- that would be me!”

The girls skipped off, arm in arm, giggling and waving, and I thought: how lucky am I to be a small part of these kids’ childhood memories? It isn’t often that an outsider gets that gift; usually it’s reserved for family, or maybe teachers or scout leaders. This is why a party last Friday night left me feeling especially blessed.

I was doing a birthday party for a set of twins I’ve known for quite some time. I started with their fifth birthday, a princess party. This year, for their eleventh birthday, we were doing a slumber party, which included silk screening pillow cases and playing lots of fun games with sleeping bags and flashlights!

The girls started their evening at a pizza parlor while I set up at their house, so the girls arrived en masse. As they entered the house you could hear them chatter and twitter, like a flock of seagulls dive bombing the tourists at Fisherman’s Wharf. Their high-pitched laughter, and “oohs” and “ahhs” over the decorations rang out throughout the house. There was a genuine building of excitement as they entered the kitchen -- almost like a visible shimmering wall of electricity. As the girls settled down and I introduced myself, one of the girls piped up: “Do you remember the dollhouse party we did?”

Now mind you, this was like three or four years ago, but I actually did remember because that was the party where we needed as many hands as we could to help with the hot glue. I ended up wrangling their babysitter, Sarah. Sarah ended up becoming a valued employee for a while. The girls’ houses had been amazingly complex and beautiful. When finished, they all put their houses together to form this sort of “village/mansion.” It was pretty magnificent, so yes, I did remember! I mean, not every specific house or girl, but the general party certainly. 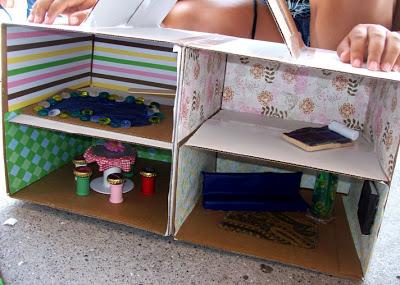 “Well, I still have my house,” the girl continued, “except now it’s like four feet tall and three feet wide!”

“It’s true,” said a few of the other girls. “We work on it every time we go over for a play date!”

I was floored. To think that a craft we had made at a birthday party four years ago was still around, and actually still inspiring the guest and her friends was awesome.

It took me back to my own childhood, when I made a dollhouse with my beloved grandmother. I had a real dollhouse from my mother’s childhood, which was quite beautiful. It had stairs and an attic, a bathroom, dining room, kitchen, and a front door that opened. But it was the other “project” house that I actually loved. It wasn’t anything fancy. My pop had taken a wooden crate and divided it with two slats of wood so that we had four rooms on two levels. Every time I went to my Grammy’s we’d work on the dollhouse together. We made curtains out of fabric scraps, wove tiny rugs out of yarn, made furniture from wood pieces, created bowls out of bottle caps, and turned the tiny plastic liners that used to come in the top of Coke bottles into the perfect miniature plates. We made little food out of clay and couches out of sponges. There might have been a few pilfered pieces of pre-made dollhouse furniture... but if I remember correctly, the project house was entirely created by hand. The greatest part of the house were the ongoing renovations. We were always painting it, or wallpapering it, or creating new furnishings, just like a real house. The two occupants, Lucinda and Jane (named for the two dolls in one of my favorite childhood novels by Beatrix Potter, “The Tale of the Two Bad Mice”), lived in a topsy-turvy, ever-changing world. They never complained though. 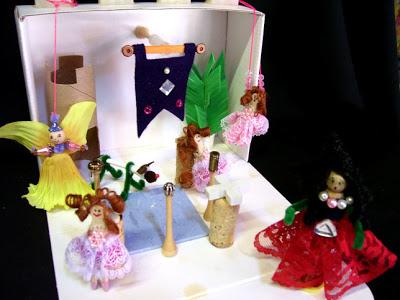 The best thing about making dollhouses like this is that you don’t need anything fancy. Just a sturdy box, some scissors, tape, glue, and the recycling bin! You start to look at things differently when you are making a dollhouse... that little bit of packing that you just got from Costco could make a great bed... that lid from the used-up toothpaste could make a great vase... that drinking straw becomes a curtain rod... The possibilities are endless!

Once again, I am reminded about just how lucky I am I get to do what I do. Making memories -- you’ve got to admit, that’s a pretty spectacular job to have.