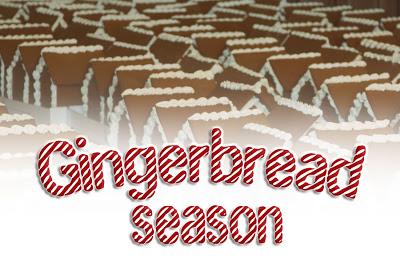 I don’t know if it’s just a Bay Area thing, but almost every fundraiser, shelter celebration, and big corporate Christmas party seems to have one recurring activity: decorating gingerbread houses.

The other day I was talking to the owner of Creative International Pastries, a fabulous bakery in San Francisco where I get all my holiday cookies. He said that they will make over 2,700 gingerbread houses and 24,000 gingerbread men this season! 24,000! That’s a lot of dough... and I’m not just talking gingerbread... the houses take a lot of work to make, and they aren’t cheap! You should see those things when they’re being delivered. They drive up in a 16-foot truck, and when they throw open the roll top door, the smell can nearly knock you into a spice-induced coma!

Lately it seems that everyone is making gingerbread houses. Even my assistant Simone holds a gingerbread party each year, and has for five years now. She does an amazing job. She hand-makes the gingerbread houses ahead of time (I can only assume it takes her weeks to do), picks out all the candies, makes vats of icing in different colors and invites all her friends over to enjoy cocktails while they create.

What I love about this tradition is the way people configure their candies when they decorate their houses. It’s pretty incredible the way personalities reveal themselves through the candied walls and roofs of an 8 x 6 x 6-inch house. As my sister Freda said while showing me the pictures from Simone’s party, “You can tell who went to art school...” 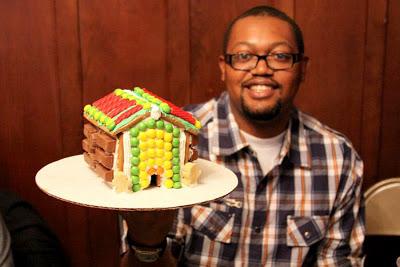 The artist, with his picture-perfect house

However, after seeing these tiny, sugar-covered façades over and over and over again, I’m left with one question: what on earth does one do with the house when you’re done? 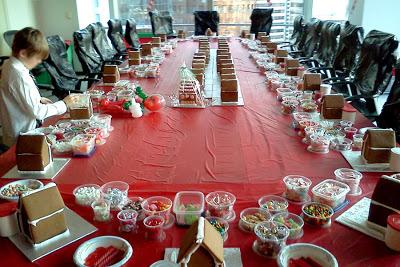 I mean, in the thirty-something events I will do this winter, I will run into the same kids about four or five times -- which means, that all over Pacific Heights and Cow Hollow, candy cane-gated gingerbread communities are springing up left and right.

I ran into one Mom four nights in a row. At the last event, she greeted me with a horrified look as her children merrily skipped past her into the craft room. “Please,” she pleaded as she grabbed my elf costume-clad arm, “Tell me there’s no gingerbread houses.” The sad, pitiful look in my eye confirmed her worst suspicions. I leaned close and whispered in her ear, “I could ‘accidentally’ drop the house as I’m packing it, if you like.” She looked at me conspiratorially. “Would you do that for me? Take the blame?” she said. “Sure,” I reassured her; better that the elf take the wrath than the poor exasperated mom. In the end, it was actually her kids who gave up the notion of taking the houses home. “We already have eight,” said the oldest. “We would have nine, but the dog ate one last night...” I looked at the mom, and she sadly shook her head. “Yep,” she confirmed. “And our carpets will never be the same.” She went on to explain that they had awoken that very morning to a demolition site of crumbs, smeared frosting, and slobbery candy. “It looked like a crime scene,” she stated flatly.

Apparently they found the dog spread-eagle on the floor, belly extended tight as a drum, whimpering in pain. “I walked that dog for two hours with no luck,” she went on, “and of course she decides to let it all go on the entryway stairs when we returned. Linda Blair has nothing on me.”

So with that horror story in mind, I again raise the question: what does one do with a gingerbread house?

In the 60s, when my brother-in-law Tom was a teen, he made an exact duplicate of the gingerbread house that graced the cover of the red Betty Crocker Cookbook. This is how he described his process: “I did make it from scratch, not the kits you can buy today that my grandkids do every year. Construction was tough and I believe [had] a little cheating with a cardboard frame holding it all together. Vanilla wafers on icing for the roof, shredded coconut tossed around liberally, gum drops also, predating gummy candies. I also remember bricks, either on walls or walkway, using the wafer thins. We did spray it with a sealant rather than eating [it], but what was used is not known.” After Tom coated his masterpiece in sealant, he kept it for years as a decoration.

But what about the houses being made at these parties? Do people actually eat them? Do children pass the house around after dinner, picking off the M&M roofing tiles or Reese’s peanut butter cup windows, leaving the Good and Plenty walkway for poor old Dad? Doesn’t the candy get stale and nasty over a period of time? Are you meant to consume the gingerbread itself, or are you better off eating the cardboard it’s mounted on? Do parents secretly dispense of these sugar-laden structures late at night in the garbage disposal? Or gather them together and throw them in some neighbor’s dumpster in the dark of night, praying that their children won’t notice the void on the mantelpiece?

I would love to know the answer to these questions. As it stands, it’s a mystery to me, right up there with what happens to the fruitcake...