I'm a Intellifluence trusted blogger
Mortgaging for my Future?
Did you receive your letter from Santa?
Paint by Numbers | A Review from Sophie...
Me, A Minimalist? 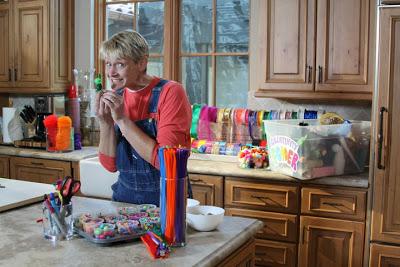 On Wednesday, my team and I gathered at one of my amazing client's houses, as we often do before any major event. This time was no different than others: we came with a van full of crafts, props, and costume changes, all of us filled with excitement and anticipation¦ The only difference was, we weren't there to do a party. We were there to film video clips for our upcoming website!

My client had graciously offered up her house as a filming location, so after promising to make sure not to spook the dog and to clean up after ourselves, we overtook the kitchen.

The idea was to shoot 12 segments (some as short as 30 seconds, some as long as 5 minutes) showing how to make crafts, play games, and offer up quick and useful tips.

Set up took about two hours as we moved furniture around, masked windows, and basically turned the kitchen into a small TV studio. It was pretty amazing to watch and be part of this whirlwind of activity. Makeup was applied, focuses were set, and puff balls were placed in fetching displays.

I should make a note that this is the advantage of having a husband who is a video producer. I'm blessed with access to amazing equipment and a great professional crews; Otherwise I'd probably be producing these on a borrowed Flip camera and editing them in iMovie!

Finally it was time to begin filming. I hopped up onto the counter to start the day with a rousing rendition of "We're Going on a Bear Hunt;" and this is where I learned that it is a good thing to warn your sound recordist that you are going to actually scream at the camera in a certain section, otherwise you might end up with his ears bleeding!

Connor keeps an eye on the monitor

There's a definite learning curve when working on TV and video. Don't rustle your mic, keep your movements small, don't move too quickly or the camera will lose you, and slooooowwww down. For any of you who know me, you will realize that this last note is practically impossible for me! I move and speak a mile a minute, so for me to ratchet it down takes tremendous mental effort -- the only time I speak slowly, is when I'm speaking Spanish!

I was also confronted by a mind blowing realization: just because I've been teaching arts and crafts for 16 years, doesn't mean I know how to "teach" arts and crafts!

It's one thing to sit with a circle of children, show them the basic steps on a craft, and then turn them loose on a table full of supplies, than it is to stand in front of a camera and "instruct" your audience. I found that my mind was racing ahead of my hands, making sure that I had every step covered¦ and consequently, I'd forget the step that I was doing! More than once I'd get this sudden wave of blankness that washed over me, as if someone had just thrown up a test pattern in my brain. "Earth to Sophie;" You are making a magic wands. Please respond! Tape is rolling!"

I will tell you this: it gave me an amazing respect for everyone who has a D.I.Y. show. The ease with which they present their material is awe-inspiring. I gotta tell you, those guys work hard!

All in all it was a great day. We filmed our 12 clips, we had some good laughs, and I came away with a better understanding on how to prepare for our next segments!

Now, if I can just figure out where I left those puff balls...

Check out one of our completed videos -- how to make a tin can drum!