Recently, I had a kid request a “Love Our Mother Earth” party theme. I thought it was a totally fun idea, and with Earth Day just around the corner, I thought I’d share some of the ideas we came up with! My little client was way into recycling -- to the point where she knew the different kinds of plastics that could be recycled or not! Needless to say, I was impressed, and wanted to make sure I created a party that left as small a “footprint” as possible. My goal: no more garbage than could fit into a paper grocery bag.

We started with invitations that were printed on paper bags. They not only sported a little poem about saving the Earth, but also listed seven fun things to do with the bag, including wrapping the birthday girl’s present inside. 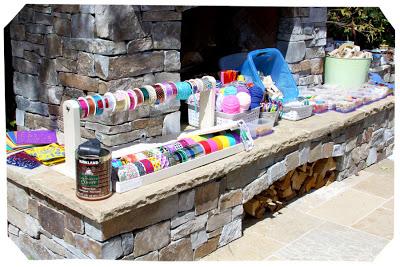 For decor, we lucked out because we had just done an eco-friendly Bar Mitzvah and had a ton of really cool moss products in a variety of shapes, including bowls, balls, and funky little bubble-shaped patties. At the food table, I chose to go with metal water bottles with the kids’ names on them instead of glasses or paper cups; the kids got to take the bottles home with them as part of their goodie. It also made for a terrific opening activity of decorating them with stickers and permanent markers. I also had three dispensers for drinks: water, milk, and lemonade.

My sister Freda also made an amazing manzanita branch “tree” to use as a centerpiece (although it ended up being so tall I had to place it on the ground). To add a bit of whimsy, Freda made little birds’ nests out of moss, and placed a Cadbury egg in each one for the kids to eat. 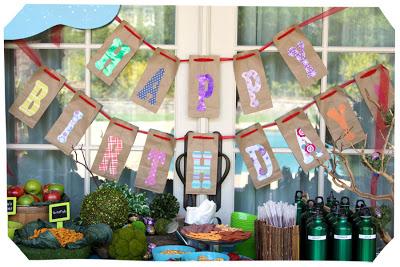 My favorite item was a handmade birthday banner that Freda fashioned from paper bags. I printed out backwards letters for her on full-sheet sticker labels. She cut those out and put them on the back of fun patterned scrapbook papers. Once cut out, she glued those to the paper bags and simply strung the bags by hole-punching the tops and stringing a silky ribbon through the holes. When all was said and done, nothing was thrown away, not even the scraps from the letters (we used those for another project)!

Once all the kids arrived, we played some funny recycle games. 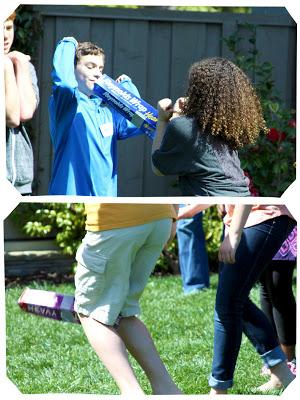 We actually ended up playing with those long boxes that tin foil comes in because we had them on hand, but I would have normally used a water bottle. The object of the game is to pass the item from person to person without using your hands, but instead a series of other body parts. All you need is a recyclable item and a bunch of kids. Here’s how you play: 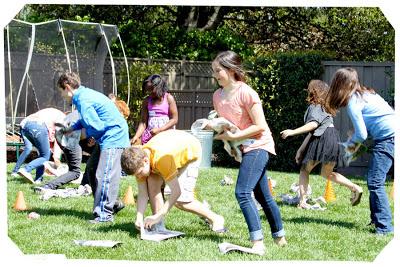 We also had a recycle relay race. 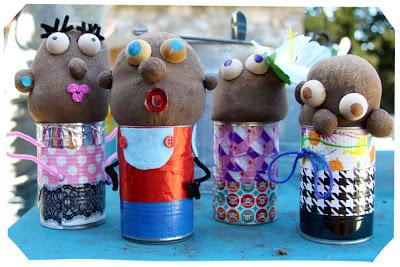 We then took a break to make “Grow Buddies.” And truth be told, the kids could have worked on them all day! It’s a pretty simple craft at its heart, but the great thing about it is that you can get as detailed and inventive as possible.

By then, it was time to sing “Happy Birthday” -- but instead of a cake, my birthday gal opted for a sweet treat that celebrated land and sea. I made tiny glass flower pots with pudding “dirt,” and little glass bowls filled with blue Jell-O to represent the ocean. The recipe is really simple!

We also served meringue cookies as “clouds” to represent the sky, but we bought those from Trader Joe’s!

All in all, we were able to keep to our goal, and the only real garbage we made was from the Cadbury Egg wrappers and the packaging from the birthday presents. So in my mind, mission accomplished!