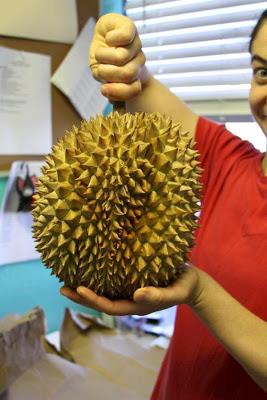 When I opened the door to my office this morning, I was hit with the most unpleasant smell. It was a mixture of nasty feet and sun-spoiled milk. Immediately my mind raced to a power outage; did the food in the fridge go bad? Was there something nasty in the garbage bins? Did someone leave their lunch out overnight?

My poor assistant Kelly, who had arrived earlier that morning, said she had made the rounds and cleared out every garbage can in the office and warehouse, but that the culprit was actually a gift that my sister had created.

My sister Freda, appeared just at that moment, wearing this huge, sheepish grin. Turns out she had made a “present” for my mother’s birthday out of a durian (an extremely expensive fruit that is an Asian delicacy), and let me tell you -- all 3,500 square feet of our warehouse reeked!

Let me explain the circumstances that begot the invasion of the stinky fruit.

It’s my mom’s 67th birthday, and I decided that it would be fun to buy her a chicken coop. She lives in Sonora, California, on a nice-sized piece of land, and has always wanted to raise chickens. She’s had this idea in her head now for about 2 years, and I figured that I’d hasten the process by getting the actual dwelling. My dad had spoken of this guy who built amazing little coops, so with my Dad’s help, I contacted Bolton Feed and ordered a cute little coop.

I mentioned the idea to my sister, who after her initial reaction of abject horror over my mother raising chickens, decided to get on board and pay for the chickens to go with the coop. Now, where she got the idea to dress up a durian as a chicken is anybody’s guess, but that’s what my sister decided to do... hence the odor that assaulted us when we opened the door. 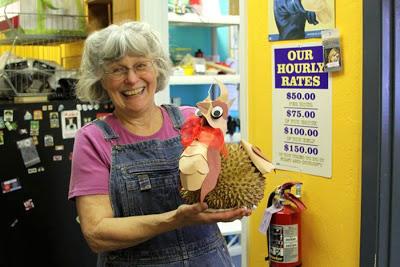 My mom with the chicken-durian

After all the explanations, the birthday revelations, and the excitement over getting chickens, Freda decided we need to crack open this stinky fruit and try it. First, I must reiterate that this smell was so nasty that I was literally gagging. I got all the windows and doors open and still the smell wouldn’t leave... so the idea of cracking the offending fruit open filled me with dread.

If you’ve ever seen a durian, it’s not something one would readily consider a tasty treat for dessert. It’s huge (ours must have weighted at least 12 pounds) and covered with deadly spikes. I swear I’m not exaggerating here. This thing could be used as a weapon. In fact, I’m convinced that years ago, somewhere in Indonesia or Malaysia, armies were using these as deadly cannonballs. I can see them used as ammo for a catapult. How else would anyone decide to crack the puppy open and eat the insides?

Both my mom and Freda punctured to their fingers when trying to lift the sucker out of its straw-lined bed (remember, my sister had turned it into a chicken). Opening the fruit was a challenge. Like a coconut, its got this incredibly hard skin (with one-inch dagger-like spikes sticking out). Brittany, another assistant in our office, quickly jumped on the internet, and we discovered a video showing how to handle and open a durian (gotta love the web!). Turns out there are actually six lines on the durian, which serve as “score” marks for cutting. If you cut along those edges, you can open the fruit pretty cleanly, revealing what I can only describe as a lung-like mass of fleshy fruit. It’s pale, and meaty looking like an organ... or a very large albino banana slug.

If I’ve painted an appetizing picture for you, then you and my sister should hang out together. 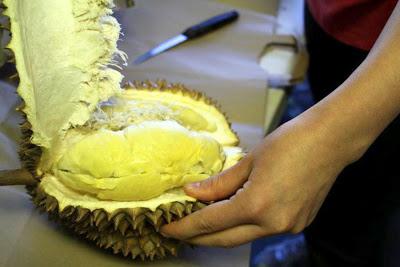 We all were forced to try the substance, which, although not unpleasant in flavor, has such a strange odor and consistency that I could only get a small bit into my mouth before I felt my breakfast demanding a quick exit.

I will say, it made for a very exciting morning, with all of us chicks squealing and screeching, and challenging each other to try the durian. It was quite a scene. 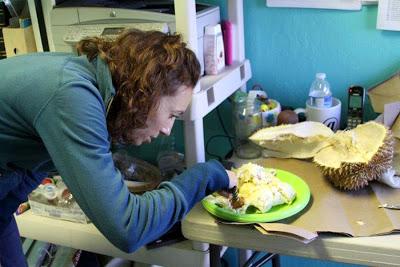 My sister leaves early on Tuesdays, so I insisted she take the offensive fruit with her. She did so, but the smell and the injured fingers still linger...

My advice to any of you out there... leave the stinky fruit at home; don’t bring it to work to torture your poor coworkers!