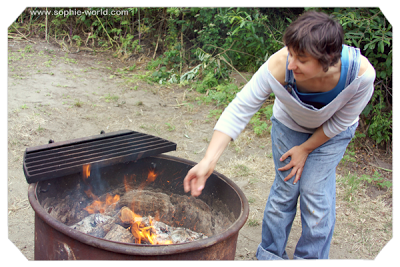 To continue our camping theme, this week my sister Freda thought she'd share a memorable camp experience with you. Enjoy! -- Sophie

Growing up a city kid, my idea of camping was one week every summer spent at a Christian sleepaway camp for music and drama, set in beautiful Mount Gretna, Pennsylvania. As the name suggests, it was no wilderness training program. It was mostly little boys who didn’t know they were gay yet, girls who wanted to be stars of the stage, and a bunch of band kids who came to a camp where they could be considered cool. (“Did you hear Tubs rocking ‘Taps’ last night? He killed it!”) It was a safe haven of cool from the reality of school. It was awesome and I loved it.

Because it was such a sweet part of growing up, I couldn’t give it up even though I outgrew it. As a teen I returned as first a C.I.T. (counselor in training), and then as a college student I became a real, bonafide camp counselor, complete with a group of first-grade charges that were all mine, 24 hours a day for an entire week. It was my duty to usher these young minds through a powerful week of spiritual study and a program that concluded with a big hoo-ha musical for the parents.

This camp was all about music, dance, and drama; meals came from the mess hall three times a day... except for one day. In the middle of the week, we cooked lunch over an open flame... in the woods... alone. I had never started a fire before in my life, so heading out that day, I got basic instructions from another veteran counselor. He told me to crinkle up the newspaper included in our “lunch kit,” and then place logs around the paper. Light the paper, the logs catch fire. Sounded easy enough! As we set off, I had visions of my happy campers enjoying their woodsy meal. However, the reality of the situation became pretty clear, pretty quickly.

Our group consisted of myself, another counselor who was also about 20 or so (and also had no fire experience), and 15 first-graders. We picked up our supplies, distributed them amongst the group for carrying, and headed off. These were the youngest kids at camp, so it took us quite a while to walk to our cookout location; we had to keep switching off who was carrying what. First graders teetering with giant jugs of water and smacking bags of buns against trees as we walked the mile to the site was a bit painful. I also recall that this group had a kid with a head injury, who could under no circumstances be allowed to fall, because her head could swell up (and in my mind) explode! Oy gevalt!

We got to the campsite, and I sent the children out into the surrounding wilderness to gather logs. They performed admirably, bringing me some real doozies, big ones! It had rained the evening before, so these logs were wet. I was apprehensive, but did as I had been told. I crunched up half a New York Times, put it in the middle of the fire pit, and placed three massive logs around the paper. I lit the paper, and it burned into a smokey pile of ash in minutes, leaving the logs as wet as ever and a smokey smell on our clothes and hair. My heart stopped -- yes, this was a heart-stopping moment! There was no way this fire was going to happen! I had burned through my entire stack of paper, struck every match I had, and still... nothing. The kids were getting grumpy and tired because I had marched them a mile, carrying heavy stuff, all with the promise of delicious campfire foods -- and I was really coming up short.

When you’re the leader of a group of kids who think you’re a spiritual leader, the funniest person alive, and a mentor in all things “camp,” the inability to start a fire was a big blow to the ego. I watched their hungry faces as the veil of perceived awesomeness began to fall, and I was revealed as a baffled art student incapable of feeding them. I needed to get my reputation back, fast! I left the kids with my co-counselor, grabbed the weenies and hamburgers, and sprinted to a neighboring campsite. Soon I could hear the other campers singing, laughing, and enjoying s’mores over a roaring fire. Darnit! That’s what my kids should’ve looked like! I begged them to let me share their flame. My vegetarian butt hastily roasted the vile meat while this group’s counselor teased me about being a city girl. In 15 minutes, I heated the food, wrapped it in paper plates, and ran back to my site, hamburger juice burning my legs as it flew out of the paper plates I was clutching to my chest.

I arrived a sweaty mess, but triumphant in the thought that I could feed my kids... only to find out that they had already eaten all the buns, lettuce, tomatoes, cheese, graham crackers, chocolate, and marshmallows. They pooh-poohed my messy meat platter, just as the bell to return to return to camp for afternoon activities chimed. I was the laughingstock of the camp that afternoon, but ultimately it was all okay. The following year, a fire-trained camp staffer was sent with each group to “cookout day” to make sure everyone got that roaring fire experience. (Wow -- I messed up bad enough to change camp policy!) 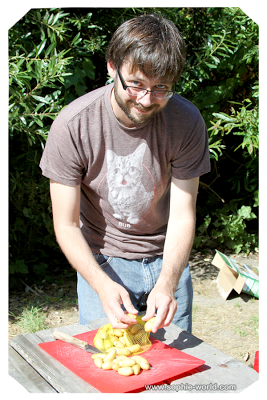 Since then, I have become a real avid camper and an excellent fire starter. It is actually quite easy once you get the hang of it, but like most things in life, it does take a bit of practice to get good. Here is how my fiancé taught me to build a fire five years ago.

You will need the following supplies: 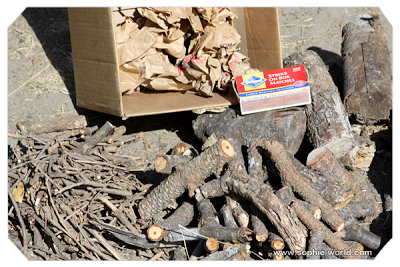 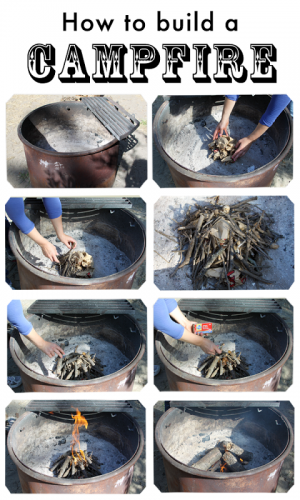 Start by scrunching up your paper into balls, make them airy balls, not so tight that they smother the flame and make it harder to burn. Take a few paper balls and make a little mound in the center of your fire pit.

Take some twigs and begin to build a teepee around the mound of paper. I like to use lots of twigs because they are what light after the paper. The more you have, the better your chances of igniting the next largest pieces of wood.

On top of the twig teepee, place a few branches, thicker then twigs but not quite logs.

If you want, you can add a LITTLE lighter fluid to the newspaper. I don’t recommend it until you try starting a fire naturally! A little bit of lighter fluid goes a long way! If you are using a lighter, twist a piece of paper into a tube and light one end of it, then stick that into the fire to ignite the paper at the center. Light the central paper from three sides of the pile. If you are using matches, you can drop the lit matches into the paper as you get the paper to catch.

The paper catches fire, the twigs catch fire, and your branches catch fire. At first this will be a nice roaring flame. Now it is time for larger logs! Add three at first, continuing the teepee idea. Add logs as you need to keep up a nice flame.

Of course, be careful when you are doing this! Always use common sense when dealing with fire. Keep enough water handy to extinguish your flames if need be, never walk away from a fire, and always build one in a fire ring or pit so it stays manageable and contained. 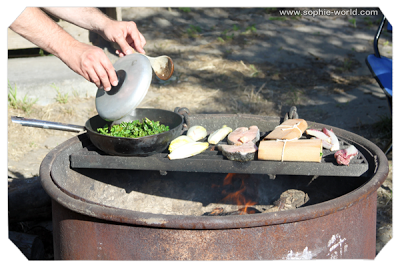 Ahhh, if only I had these mad fire skills as a twenty-something... but then I wouldn’t be able to share this delightfully embarrassing campfire tale with you! Happy camping! 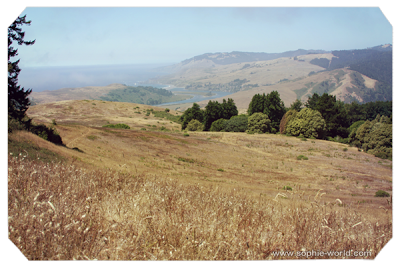