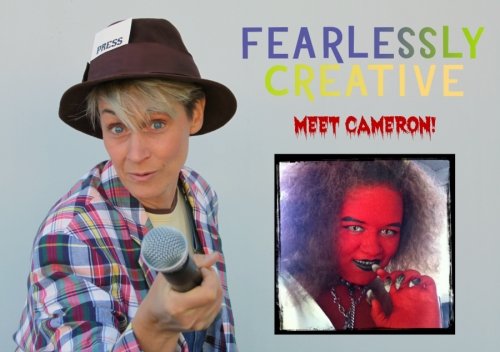 When I think of fearlessly creative people, I’m usually thinking of folks who push the envelope of inspiration in one direction or another.  It’s not often that I find someone who actually embraces the “fear” in fearlessly creative.  However, Cameron Kaplan, a 15 year old from Oakland, California does just that with her amazingly creepy horror makeup.

I first met Cameron through her mother, Lynn, who holds an annual Haunted House in her 450 square foot garage.  At that time, Cameron was just turning 13, and had opened her own little “cake pops” business. Cam called them lollicakes.  She made these adorable and tasty treats for several of my clients in the years to come. 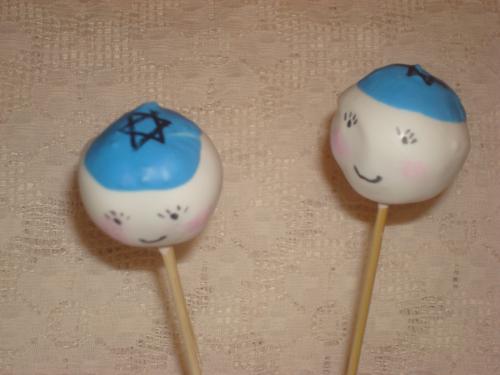 One of Cam's first creations for Sophie's World

However, Cam isn’t one of those gals who likes to be pinned down by one art form...in fact she excels in so many varied areas one might have to consider her a sort of “Renaissance teen”.  Where some artist might be content to settle into one art form or another, Cameron is exploring all of her options - writing, make up, and recycled crafting just to name a few.

I caught up with Cameron recently, and she took time from her busy school schedule to answer a few questions.  I hope you find her as awe inspiring as I do.  Remember...she’s 15!

What do you do?

How did you start?

The papercraft was born of boredom, the loss of my wallet, and a stack of empty milk cartons. The writing was born of boredom, a computer, and complete dissatisfaction with the way one of my favorite books had ended. (the book, incidentally, was Cyrano de Bergerac. I was an odd 10 year old) The makeup has taken longer. The shortest answer is that I discovered I enjoyed it and had a knack for it after building haunted houses with my mother for several years. 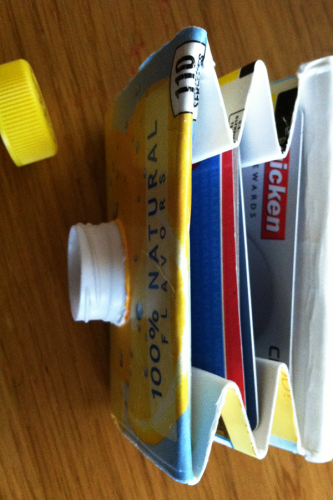 Do you have any training?

Who or what are your biggest influences?

My mom and dad, but not it that vague, holding-an-Oscar-thanks-so-much-ma-and-pa kind of way. It's more direct than that. My mom got me started and continues to keep my projects afloat. My dad taught me to think critically about projects and be realistic. My other artistic influences are Terrance Zdunich and whoever it was who invented cream soda, because, honestly, it doesn't get more brilliant and influential than that.

When you hear the words "fearlessly creative" what do they mean to you?

One who lets their mind go where it will, and cultivates and nurtures the strange and outlandish ideas that form as a result.

What do you do when you’re feeling uninspired?

Feeling uninspired isn't really a problem. I don't sit in front of a blank page and wonder what to write. Usually, I have an idea, don't have time to write it down (paint it, construct it, whatever), forget the idea, then remember it again at 2:30 in the morning right before I fall asleep. In general, I don't sit down to work on something before I have the idea of what I'm going to do.

If you could do anything, what would you do?

If I could do anything, I would make my most recent book a bestseller, and put the proceeds towards genetic research.

Any advice for someone to follow in your footsteps?

Don't be shy. The best learning experience I ever had in makeup was doing stage makeup for a school play. I had never done stage makeup before, but I learned more in those 2 weeks than I would have in any class. I'm not saying you should go off half cocked. (I had several rehearsals to work on the stage makeup) But you certainly learn a lot.

Same goes for every other artistic thing I do, especially writing. Even if you haven't written a word since your high school paper on the eating habits of hermit crabs, Sign up for NaNoWriMo. It doesn't matter if you don't finish, just write something! 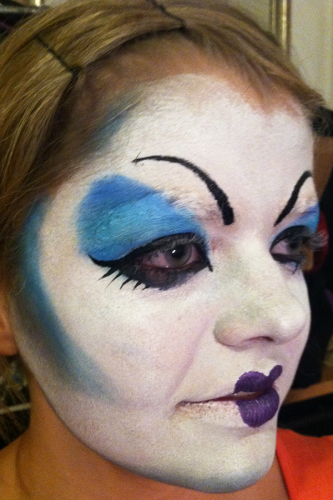 Any resources that you’d recommend?

Coastal Scents is an amazing makeup store for every kind of beauty makeup. The prices are ridiculously low, but I've never had an issue with the quality. For the heavy duty special effects and hard-to-finds, Ben Nye is the best. Never go to Kryolan. Ever. (My secret hatred of Kryolan isn't very secret among my friends and family. Or anyone who's been within a 10 mile radius of me when I've been trying for the 1,548,573,937th time to get one of their so-called “professional” foundations to blend with an actual, normal, living person's skin tone.)

What’s your process for creating a new work?

It's different for every creative endeavor. For clothes, it usually begins with necessity. (I don't have a dress for formal, my favorite shorts tore, ect.) For beauty makeup it's usually just me getting tired of wearing the same eyeshadow everyday and playing around until I find something I like. For writing it's signing up for NaNoWriMo, where I have to write a novel of 50,000 words in one month. I love NaNo because it's pretty much the only time I get writing done. The rest of the year is just editing and not-so-fine-tuning. For special effects makeup my process is just pulling my makeup kit down off the shelf; the big projects just seem to create themselves. For papercraft it begins with gathering random supplies, then I find a TV series and just start folding until the paper begins to look like something. The only downside to this is that I've become completely addicted to Doctor Who, Sherlock, and Supernatural since I do most of my work while becoming emotionally invested in fictional characters.

My typical day is probably a lot like yours, or at least it looks that way from the outside. The “fearlessly creative” differences in my day are mostly in my head, really. In architecture class, when told I can do anything as long as it relates to the theme of unity, I begin hording empty gluestick containers and milk cartons. When I see a cute outfit, I think “How could I incorporate a corset?” When we're discussing genetic diseases and their grotesque effects on the human body in bio class, I look at the pictures and wonder if I could recreate them for a haunted house. When I sit across from a cute guy in English class I wonder if I could convince him to model a dramatic stage makeup I've been sketching (shirt optional, of course). 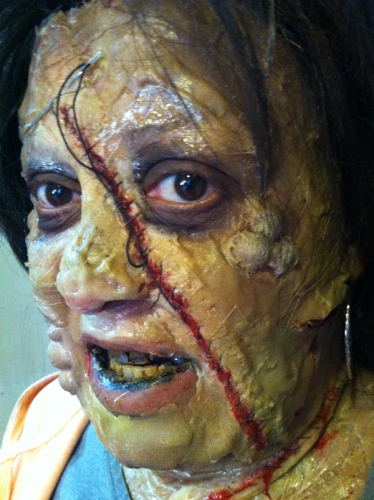 In 5 years, in college studying psychology. In 10, doing special effects on the set of whatever zombie movie our collective cultural fixation with the undead will force Hollywood to dredge up. In 20? Well, let me tell you a story: My dad is a computer programmer, he builds apps for mobile phones and personal computers. Now look back at that previous sentence. When my dad was my age, that sentence would have sounded like science fiction. Computers took up rooms, and were a sixteenth as smart as my smartphone. When my dad told me that story, I realized how ridiculous it is to ask a child growing up in the 21st century what they think they'll do with their life. The possibilities are endless! Now, when someone asks me what I think I will do when I grow up, I merely reply that the job I want hasn't been invented yet.

Is there a question that you'd like to answer that you wished I had asked?

Yes! The question is: Where can I find you or your work?

I'm currently not selling much of my papercraft, (on account of not having made it yet... I'm kidding of course, I only have a few prototypes of each item) but you can buy my book for kindle here.

And if you look REEEEALLY closely on the Amazon page, you can see the fine print that lets you buy my book to read on your computer. I know, I know, you have to download the free Kindle Computer Reader. But trust me. The book is worth it.

If you're interested in hiring me for makeup of any kind (Stage makeup for a play, special effects makeup for a haunted house, beauty makeup for a prom) email me at Camkap@gmail.com 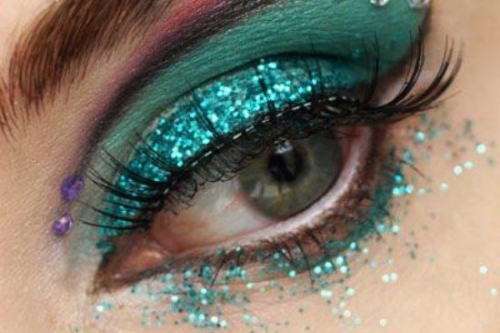 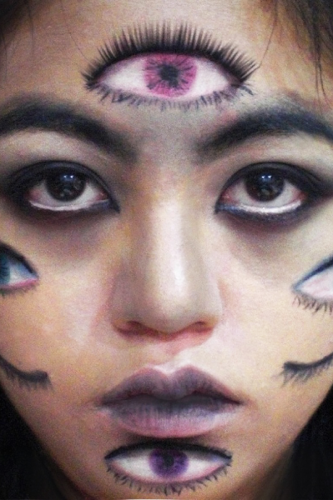