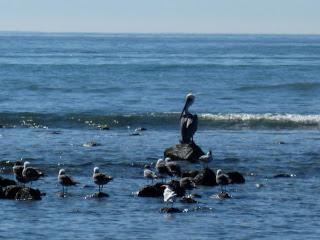 From the balcony of our condo in Mexico, we can see amazing natural beauty. There are the rolling waves, the fishing boats, the misty mountains of Bandaras Bay (although I have yet to see Antonio anywhere!...). But you can also see some very odd things - like pelicans.

Yes, pelicans. They're so graceful in the sky, but crash land with the velocity of Chuck Yeager's Bell X-1 breaking the sound barrier. This aerial display is so captivating I could sit and watch it for hours on end. I can't help but see one and think, There were definitely dinosaurs at one time. I mean, if anyone ever needed proof of the existence of pterodactyls, all they need to do is watch a flock of pelicans bobbing on the water or crossing the sky.

I'm sort of addicted to pelicans, you could say. They amaze me. They really are quite fascinating to behold, what with their duck-like bodies and their enormous heads. They look constantly on the verge of a faceplant, which, I might add, they do on a regular basis while feeding.

I'm really not sure how they ever catch anything. I would assume that the first shockwave caused by the initial feeding pelican would chase all of the fish away - what with the birds' legs and wings all akimbo, and their butts sticking straight up in the air. Unless of course the fish are just laughing so hard they don't see it coming!... Fish aren't the brightest creatures, I've been told!... But I think they do have a pretty good sense of humor!

Down the beach a bit, about half a mile from our bay, is the tree I call the Pelican Tree. This is where the local pelicans hang out, sun themselves, and probably chat about the gringos. It's a pretty cool sight: these big, heavy birds perched on tiny branches that bend under their weight. They sit with such balance and grace, wings outstretched to warm themselves in the sun, or with their enormous heads tucked under a wing for a rest. The funniest thing about them is that when their beaks aren't full of fish and water, they form an "old lady underarm" wattle type of sack. Consequently, when they tuck their heads in, the beak folds in against their chest and they look like honest-to-goodness pinheads from a distance. Honestly, it's like a big fat body with a hat pin stuck in it. Truly a sight to behold.

In an effort to become one with my favorite birds, I sat a bit away from them and over the course of fifteen minutes moved ever-so-slowly toward the tree. At first they didn't seem to notice me, or decided that if they pretended not to notice me I might just go away - which I think they would have preferred, since I obviously did not possess wings, feathers, or a beak. However, after twenty minutes of being quite stealthy... I sneezed. The birds went on red alert. Several took to the sky, others nearly fell off their branches and had to flap their wings to regain their balance. One turned his beady black eye in my direction. Because of that enormous beak, they don't seem to look at things straight on; they turn their heads to the side and catch you in a one-eyed stare. It's like looking into a black hole or vortex... It's a little intimidating! And then, to my horror, the bird let loose with an enormous plop that splattered the rocks below and nearly got me with its ricochet. The statement had been made: I was an intruder.

I took that as a sign that I was no longer welcome and headed home... defeated.

I guess I'm just not meant to be the Pelican Whisperer.