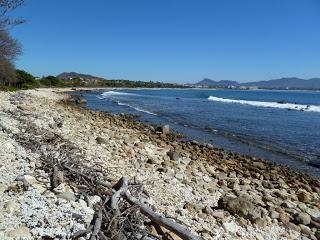 Because I'm a strong believer in staying positive and always trying to improve myself, I pick up the occasional inspirational book for a bit of a recharge. Being on vacation is always a good time to catchup on my reading, too. The book I'm reading suggests that you make a list of at least 100 things you would like to do before you die; you know, like the "bucket lists" that have become so popular of late. So after thinking things through, I came up with a few local items to do while I'm here on vacation. One of them included walking to the point.

Now, let me explain something about our beaches here. They are lovely, don't get me wrong - but they are more along the lines of your Cape May rocky shore than your soft Bermuda beach. Quite frankly, walking along the shores here has more in common with bouldering in Tahoe than a tranquil stroll in the sunset.  But I was undeterred! I would walk to the point! Even though it meant doing it in my flip-flops, over dangerous, ankle-twisting terrain! I was going to do this! I was going to conquer the point!  I've gotta admit, though, after watching bunches of sun-drenched, barefooted surfer dudes hopping and leaping their way across the path like mountain goats, I figured it would be a snap. I mean, I wasn't going to be encumbered by a big honking surfboard, and I'd have shoes. It would be easy!

The first thing I discovered was that I have feet straight out of The Princess and the Pea. One tiny grain of sand caught under the strap of my sandal, and oy! It felt like my foot was being attacked by hundreds of sandblasters. Agony!  The alternative was no better, though: removing the shoes and walking barefoot only created pain in the ankles, heels, and toes! One sharp, pointy rock to the arch and I was through! The shoes went back on! 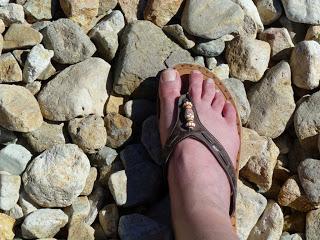 So there I was, picking my way through the minefield in this jerky step, "lift foot, shake shoe, step, lift foot, shake shoe" manner that was straight out of Spaz Cadets 101. Add in a slip and slide every now and then due to shifting pebbles that would cause me to throw my arms up and out in strange angles, trying to keep myself upright, and you've got a candidate for Monty Python's Ministry of Silly Walks.

Did I tell you I was determined? I was! I mean, for goodness sake, I'd put it on my list, and it was the first one I was attempting to tackle - how seriously foolish would I feel if I couldn't even cross off my first item?  I refused to give up! I lingered at the tide pools, watching hermit crabs no bigger than a pinpoint. They were adorable, and could only really be noticed when their little shadows moved.
It was then that I noticed the buzzards. I was all alone - no other fools were attempting the trek (obviously they weren't feeling the draw of self-awareness and improvement that I was). And there they were, three buzzards looking at me with hungry eyes. Clearly they were hoping that either the rising tide or the treacherous coast would get them an early seat at my dinner table, so to speak...

I remained undaunted and pushed on, achieving my goal about fifteen minutes later.  I was rewarded by a beautiful sight: the Marietta Islands off in the distance, the crashing waves, the open skies. It was lovely.

You know how they say that the return trip is always faster and easier, partly because you have figured out the unknown, and partly because you know you are going home? Well, they couldn't be more right about this. As I was heading back I ran into an old friend who offered to drive me back to town.

I took him up on it!