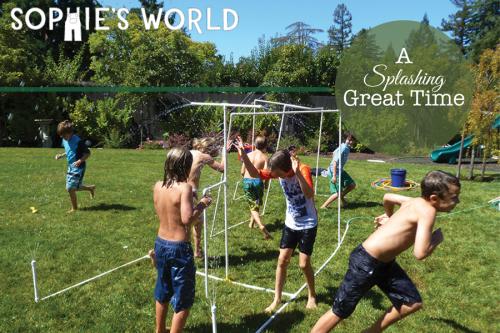 There are still a few weeks left in summer and although for San Franciscans like me, that means fog and wind, as little as 20 miles north or south of my beautiful city is what most people expect of summer...heat - and a lot of it.

To help cool off your next gathering, I’ve compiled my Top 12 Backyard Water Games and Activities! 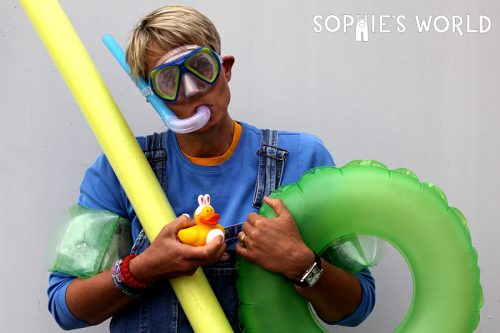 In most cases water balloons and sponges are interchangeable.  I go to the dollar store and get those big sponges that are meant for washing cars. I cut them into quarters and use them for my games!  The full sized sponge is great for those “soak you to the skin” type games.  Of course, water balloons have many advantages - unlike sponges, they don’t get dirty and they are wobbly like Jello, which adds to the tactile fun of the games. Just be certain to allow for extra time to fill them up. 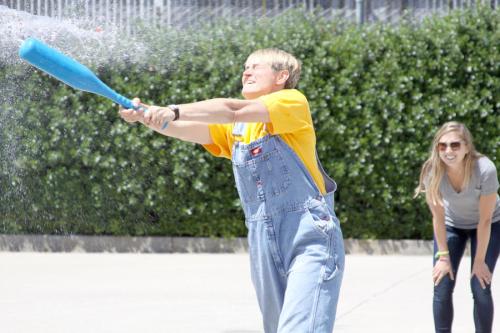 One of my all time favorite games.  I’m sure other people play this all the time. I created my version for the birthday party of a boy who lived in Sonoma county, where it can get extremely hot.  Since then I’ve played it many times and refined the rules.  You don’t even need an overly large space to play - just buckets of water balloons, a big fat, plastic bat and at least 2 players - one to pitch and one to hit. 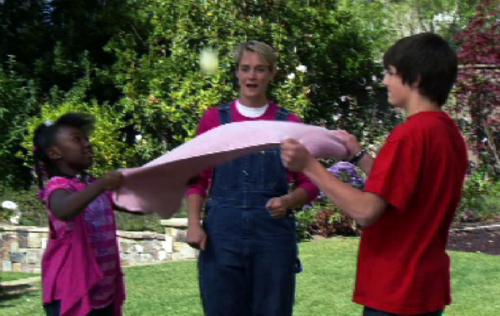 I love this game as an alternative to the standard water balloon toss.  Players pair up, and using a towel, tee shirt, potato sack, or pillowcase toss a water balloon into the air and try to catch it again.  Once the technique is mastered pairs can throw for height, number of times caught, or number of balloons at one time.  Teams can be formed where pairs try and pass from pair to pair.  It's great for team building as well as cooling off. 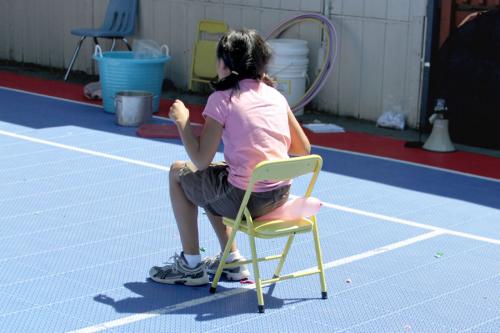 Whenever I demonstrate this game the kids get hysterical. Mostly because I end up with a big wet spot on my overalls.  Play this as a relay if you like.  The premise is to take a water balloon, place it between your knees, and waddle to a chair.  Once you reach the chair you have to place the balloon on the chair and pop it with your bottom (hence my wet overalls).  The sitting on the water balloons is priceless - because they don’t always pop on the first try!

Dry, Dry, Wet - A very wet take on duck, duck, goose.  One player is given a water drenched sponge and makes their way around a circle of seated children, tapping each one on the head gently with the sponge.  At some point the player chooses to squeeze the sponge over one of the seated players. Just as in duck, duck, goose, a chase ensues.

Waterfall Sneak - One player at a time is the waterfall. They stand, blindfolded, in front of a bucket full of water. They hold a full sponge in their hands in front of them.  At their feet is another full sponge.  One person is chosen from the crowd to sneak up, steal the sponge at the waterfall’s feet, and squeeze it over their head. However, if the waterfall hears the person sneaking, they can release their full sponge on the sneaker’s head.  Sponges are refilled, another waterfall is chosen and play continues.

Over the Head Sponge Pass 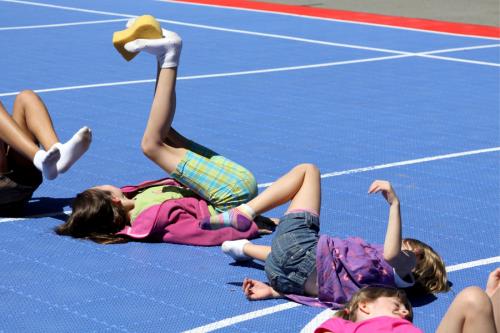 This is a great group game where everyone gets wet.  Players lie down and pass a wet sponge over their heads to one another, squeezing as they go, when it gets to the last person in line they run to the front, fill the sponge, lie down, and begin the process all over again.  This can also be played in a standing line with players passing overhead to one another.

Fill the Cup Relay  - This is a race to see which team can transfer water fastest from a bucket to a series of cups with just a sponge.  You can add a bit of excitement by allowing the player who makes the final fill the bonus of pouring the filled cup over their heads! 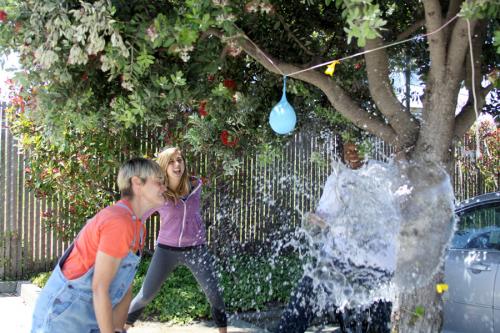 This is a sure fire way to get wet!  There’s two ways to play - with individual water balloons strung up all throughout your play area or with a full sized balloon strung up like a normal pinata.  There may not be any candy involved, but on a hot day, the results are just as sweet. 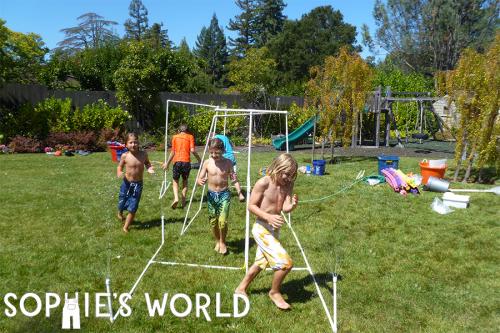 This activity was a huge hit with my summer camp boys.  All we did was take PVC pipes (cut into a variety of sizes),  tons of connectors and caps, a hose, and a drill and the boys went to town.   First we built a structure, then we decided where we wanted the water to come from.  You can allow the water to come fully out of the pipes or you can drill 1/4 holes in the pipes and caps like we did.  My favorite were the capped ends with multiple holes that made a fountain when we turned on the water.  We connected the whole thing to a hose, and before you could blink we had our own water world.

Make your Own Water Slide 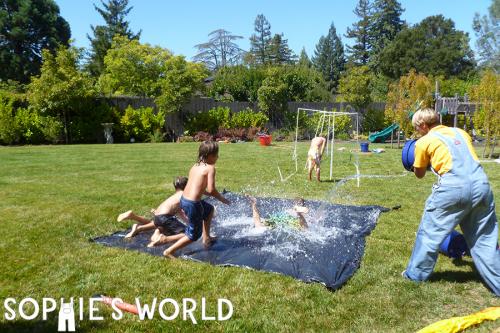 The amazing thing about the hardware store is you can find just about anything!   Last summer I discovered that they sell really thick plastic (4 mm thick and more) in 100 foot rolls.  I couldn’t resist buying a roll of it for my summer camp boys.  All we did was roll it out, secure the corners with duct tape and garden staples, turn on the hose, and let the boys loose.  Our homemade slip ‘n slide was sooo much better than the store bought brand.  The kids could have played all day. 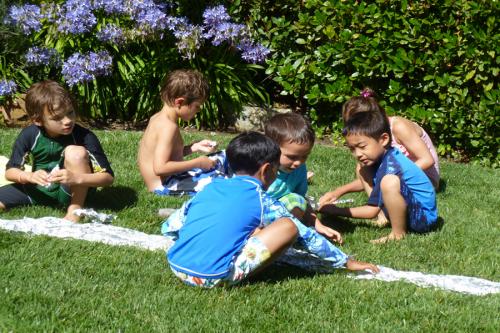 This activity is so easy, it should be illegal!   All you do is roll out a distance of tinfoil.  Connect one end to a hose, then make your way down the strip rolling up the edges to make a flexible trough.  When you get to the end pinch it up to seal off the strip, and voila - instant river!  Turn the water on lightly, so it can continue to ebb and flow like a real river.  Use bottle caps and can tops for boats.  I can’t explain why, but there is something so engaging and engrossing about this activity...my summer camp kids were way into it.

Hose Battle Ball - You need two hoses and a beach ball for this activity, although it can also be done with high powered water guns as well.  The object of the game is to see who can get a beach ball into their opponents goal first.  The catch is each player can only use the water from their hose to propel the ball.

Hose Limbo - A stream of water becomes the limbo stick under which the players must try and slide - combine this with a homemade water slide for an extra bit of fun.