I'm not one to be fearful of getting older.  Sure, it takes more time to bounce back after an 8 party weekend. I'm a little creakier going up and down ladders. And who doesn't need a bit more coffee in the morning to get going? But all in all it's okay.  I am happily embracing aging "gracefully".

However, there is a terrible side effect to this aging thing that I wasn't expecting. That my eyes would start to fail me while crafting.  I always assumed glasses would be enough to keep me going. What I've horrifyingly discovered is that my eyes require more light than they used to.  That's why I was super excited when the good folks over at Brightech offered me a lamp of my choosing for review.  Remember, I always get a little nervous when someone asks me to review a product.  I feel it's really, really important to be non-biased, which can be hard when someone is offering you something for free.

Thankfully the light I received is actually a downright lifesaver! 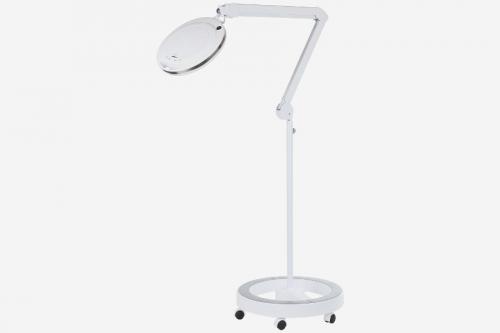 I received a Lightview Rolling Base LED Magnifying Lamp which retails on their site right now for $108.99, with free shipping.  Now, I remember my dad having a similar lamp.  It clipped to the table. It was always falling over.  All I can say is...this is not my dad's lamp.  The base on this lamp is so sturdy and heavy I think I could use it to hold up my pipe and drape.  The wheels roll easily, and although the footprint is rather large at 15 inches,  it maneuvers very easily, and tucks under most table legs. You can get it right up against your table if you want.

The arm is adjustable to heights of between 30 inches and 55 inches. It collapses down onto itself for easy storage (with the exception of that base, of course).  I was impressed with the arm action, it glides smoothly into place and locks down easily with the turn of a knob.  The head swivels 360 degrees giving you optimal coverage in almost every direction.  It's pretty badass when it comes to that swivel technology.  I just wish my knees had such movement capabilities. 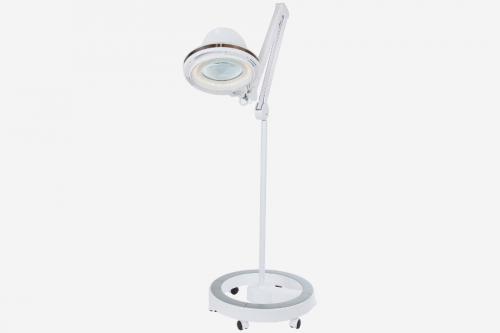 The best thing about the lamp is the light.  The paperwork claims that the LED light will last 20 years. Of course, I've only had mine a couple weeks, so I can't review the truthfulness of this claim. I can attest to the fact that the variety of light and levels is pretty darn cool.  You can choose to use a warm and soft light, or a harsher and more direct light.  Both color temperatures can also be adjusted up or down depending upon the amount of light you want.  And being that it's an LED it doesn't generate heat like a regular lightbulb, which is good when you are moving your hands in to get that close up view. 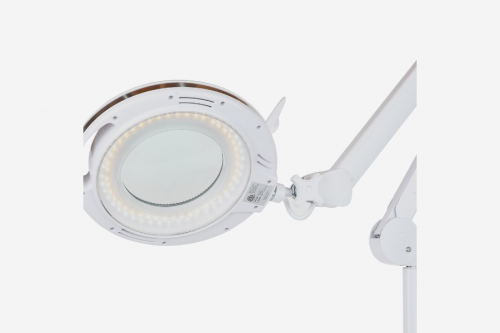 The magnifying lens is downright spectacular, even if it does point out the fact that I am in desperate need of a manicure.  I used it while tying slip knots for a necklace video and was impressed by the fact that not only did I not squint once (something I do regularly even in my glasses) but I could actually see the grain of the leather thong I was using.

My only criticisms are of the lens cover and the length of the cord.  I realize the cover, which sort of reminds me of a toilet seat lid, is necessary, not only for the protection of the lens but also so one can simply use it as a light. However, I found it to be rather large and a bit fragile.  I worry that in my hectic and often frantic world I might accidentally snap that part off (although there is that promising 5-year warranty).  As to the cord length, it's probably perfect for most home crafters, but I love a long cord because it allows me more flexibility in my warehouse. 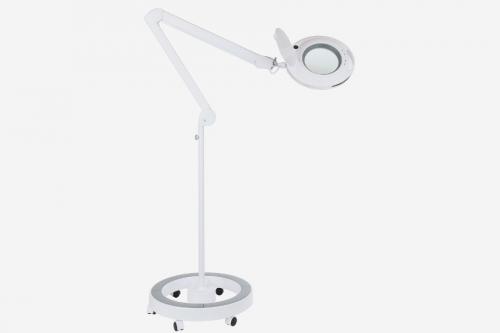 My mom is an avid jewelry maker and also loves putting together puzzles.  This light would definitely aid her in those tasks.  I was thinking I could give her mine...but the more I use it, the more I realize how invaluable a tool it is...I might have to make her buy her own.  Or wait...I just realized it's almost Christmas, I'll just get her one as a present!  That's one person I can cross off my list!  Boom!