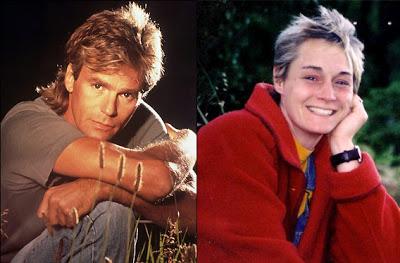 I did a party the other day where the client wanted the entryway marked with balloons, so people would know where to enter. The problem? There was nothing to tether the balloons to!

Well, I tried that, but the wind was too fierce. The balloons started making little getaways down the cul de sac. I had five weights tied to one balloon bouquet, but they just kept making a break for it, and unfortunately I didn’t have any bricks on hand! There was a nice patch of grass which made me think I could use a garden staple (which is just like it sounds: a large, metal staple with three-inch prongs that anchor things like drop cloths or garden webbing into the ground), but I didn’t have any in my tool bag, and no wire either (which could have easily been cut and folded in half to make a quick staple)... Darn...

I knew the idea was a good one, but I just didn’t have the materials. Then it hit me: paper clips! I always have nice, hearty paper clips in my tool bags. I opened up four really nice-sized clips, formed them into “U” shapes, and used them to secure the balloons into the little patch of grass out front. Mission accomplished!

However, MacGyver’s appetite was yet to be sated!

The party was a “car” theme and we were doing this awesome obstacle course. The object of the course was to use the client’s battery-powered car (which all kids love!) and drive it through a series of obstacles. Our course was designed like this: the kids had to go to the “change bowl,” grab a giant dime (which they would use later in the course), hop in the car, and go! They had to stop for gas at our gas pump, then make their way to the bridge. At the bridge they tossed that dime into a bucket to pay their “toll,” then drive over the bridge... 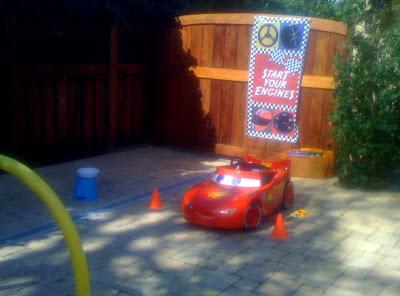 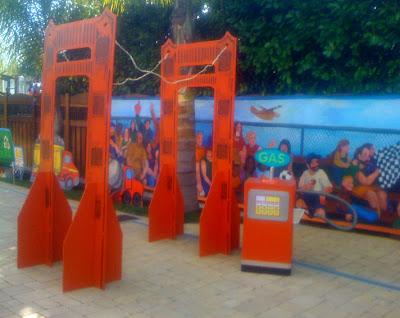 Upon setting up the obstacle course, I realized that the car was too wide to fit through the cut-out pieces of the bridge. The solution was pretty easy: just turn the bridge pieces sideways instead of straight ahead. Hey, it meant suspending disbelief a bit, but the kids still got to “drive” across the Golden Gate Bridge. But there was still one little flaw: the suspension wires. What I had brought for the suspension wires was too short because I had originally planned for the pieces to be much closer.

I didn’t have any rope, which would have been the natural choice. I thought about using extension cords, which actually looked pretty good, but I only had one to spare since I needed the other for the glue gun station. The balloon ribbon was too thin... Then it hit me! I had this really fun wire that we use for crafts, it looks a bit like a fuzzy caterpillar, or perhaps some Christmas tinsel that’s been put on an extreme diet. I had a ton in our craft area, and it was gold! How perfect was that?

So you’d think that MacGyver would have had enough by now, right? Wrong! He just had to pop in one more time... and under stressful conditions -- otherwise known as “the glue gun line”! 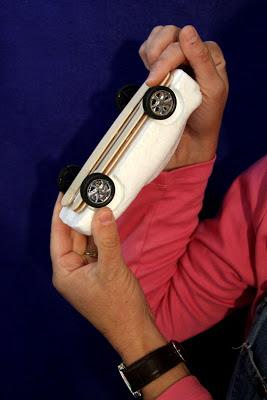 The kids were making adorable cars for their “car show” and race (we brought a cute little racing ramp for them to test their vehicles). The car bodies were made of Styrofoam (which is an easy product to use since the kids can stick things into it without glue), with wheels that actually turned. The only issue was that the axles (which are just tiny nails, mind you) kept ripping out the bottom of the cars. We were experiencing tons of “blowouts” (which made the kids giggle). I had to find a way to solve our wheel dilemma. The solution -- thank you, MacGyver -- was to take the axles, glue them to a popsicle stick, and then glue the entire stick to the bottom of the car, instead of putting the axle back into the blown-out chassis. It worked like a charm and the race continued well into cake time.

All in all, this may be a new total for me. Three MacGyver moments in one party! Somebody call the Guinness Book of World Records.