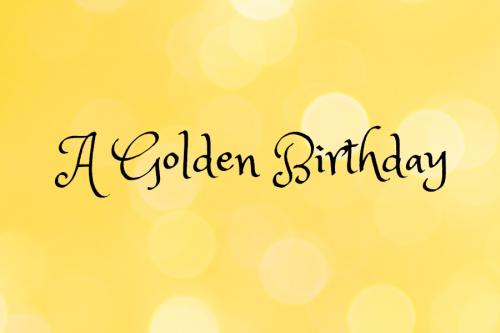 Let's take a poll: Do you know when your “golden" birthday is?  Everyone has one.  If you are like I was prior to moving West, this may be your first encounter with the term.  If you guessed your 50th, that’s a good guess, seeing as a 50th wedding anniversary is gold. You’d be waaay off.  By at least 19 years.  A “golden" birthday is when the day of your birth matches the number or years you are old.  For example, I was born May 6. My golden birthday would have been when I turned 6.

Recently we had a golden birthday for a young lady turning 8.  I must say, it was pure gold.  Here is the plan we came up with:

Keep this simple by just sending out invites that say “Stay Golden”, or fill the envelope with golden stars or confetti - although that is not always a popular choice. 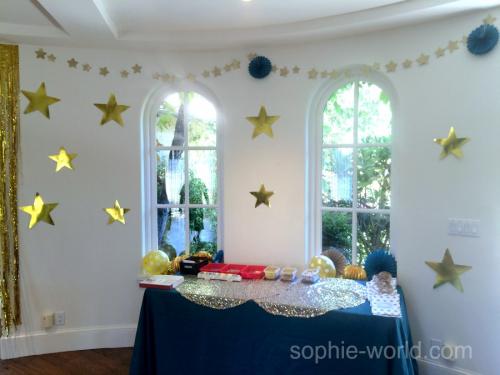 I have to admit, we went a little cray-cray on the Amazon orders!  Oriental Trading has an unbelievable storehouse of exciting supplies as well. From mylar curtains (always a hit with the 10 and under set), to paper fans, orbs, and swirls.  There are buntings, banners, and all types of stars.  There are numbers, tablecloths, paper goods, and the above mentioned confetti. Basically there is anything imaginable.  To ensure that our decor didn’t become too flashy, we added turquoise and white as accent colors.  My advice, set a budget and go to town online.  You’d be amazed how much you can get for $50.00. 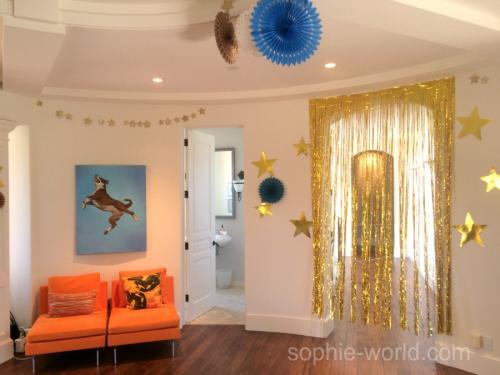 We had fun with the food.  Instead of trying for food that was actually gold, we went for things with gold in the name: “gold”fish crackers, rold “gold” pretzels, “golden” raisins, crispy “golden” tater tots, 24 “carrot” gold (carrots), Gold Medal Apple Juice, and golden weiner wraps.

NAME TAGS - We had about 40 kids. To ensure we could remember everyone’s name, we made big themed “star catcher” name tags.  The idea here was for each guest to circulate through the series of activities collecting golden stars for each one.  They were encouraged to do all the activities. However, if they found an activity they loved (with the exception of the candy necklaces) they were allowed to do that activity over and over, and receive a star each time. 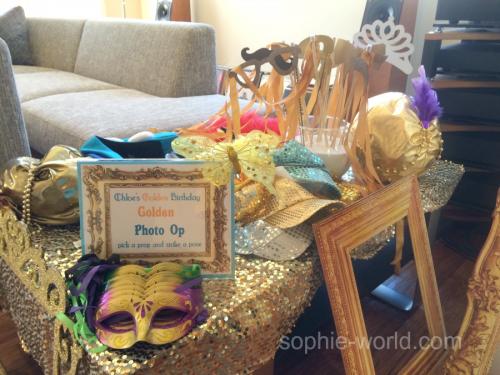 GOLDEN PHOTO OP - A gold sequin backdrop, gold props and costume pieces, .   We printed the photos on the spot and let the kids decorate the frames with golden washi tapes. 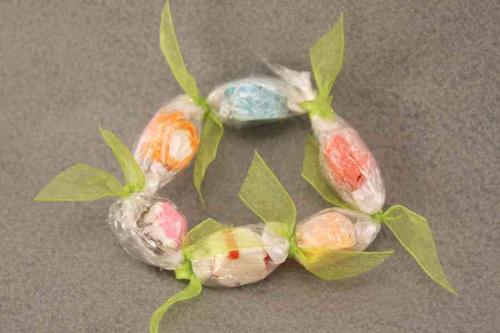 GOLDEN CANDY LEIS - Everyone loves a candy bar, but sometimes kids can go a little crazy. To keep our guests from becoming too sugared up, we decided to make Candy Leis.  We allowed each guest to choose 8 candies plus a lollipop.  The guests then created necklaces with the candy.  We did allow “sampling” along the way. 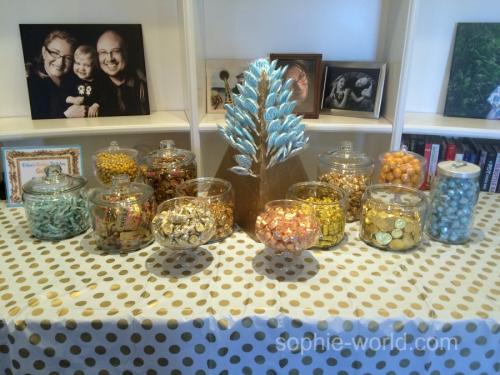 GOLDEN MASTERPIECES - We bought tiny 5x7 canvases and allowed kids to paint.  Once the pictures were dry we placed them in golden frames from Dollar Tree. 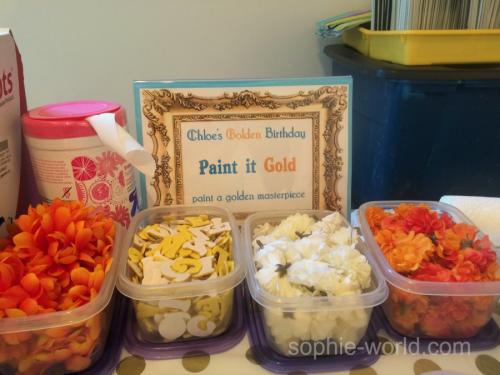 GO FOR THE GOLD JEWELRY  - We put out an assortment of gold, white, turquoise and sports themed beads (so our boys and sporty girls were represented) and let the guests make everything from keychains to bracelets. 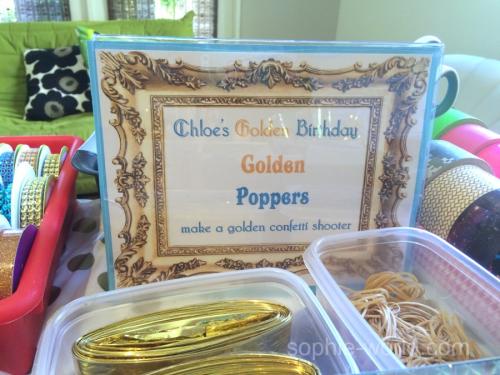 GOLD CONFETTI CANNONS - This was one of my favorite projects - and became one of the most magical moments of the party. Guests made their own poppers which we used during the Happy Birthday Song. 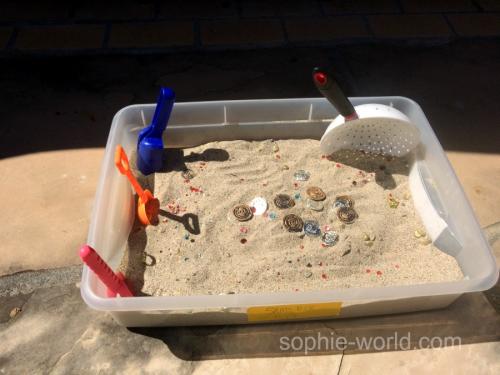 GOLDEN OBSTACLE COURSE - We wanted to make sure that we had something for our more active guests, so we designed a “gold” obstacle course.  Guests had to feed the golden idol with nerf gun bullets, make a golden basket free throw, use a mechanical claw hand to transfer pieces of gold into a treasure chest, and shoot the golden sun with a nerf bow.

SILENCE IS GOLDEN -  Everyone sits stoically in a circle, while one person tries to make others smile or laugh.

PANNING FOR GOLD - Two or more players are handed hula hoops (the pans), they are the gold seekers.  Each gold seeker designates his own “camp” on the outer edges of the playing field.  All other players are the gold.  The gold runs around trying to avoid being caught in the pans (a gold seeker tosses or places a hula hoop over their heads to catch them).  If they are caught they go stand in the gold seekers camp.  Play continues until there is no more gold to be captured.  The seeker with the most gold in his camp wins.  Another variation is for the leader to yell out “landslide” - at which point, anyone standing in a camp is freed. 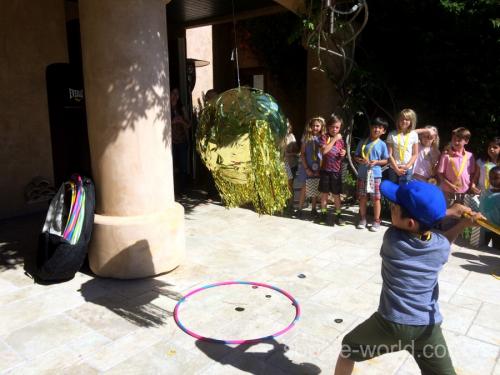 We used a giant football pinata and covered the entire thing with gold foil to make a golden ball. We filled the pinata with little treat bags, one per child, filled with Gold Rush Gum and branded golden coins (coins imprinted with the birthday girl’s name).  We also filled the pinata with bouncy balls, so when it opened the balls went bouncing everywhere.  One note, because the gold foil makes the pinata harder to open, I made sure to leave a trapdoor at the top so that I could rip the pinata open at the very end.  I gave everyone a turn and when the birthday girl came up to start the line again, I ripped it open.

BIRTHDAY WITH A BANG!

This was probably my favorite moment. I so wish that I had photos, but I was playing my guitar. Everyone pulled out their poppers and when we got to the last moment of the Happy Birthday song, they popped their poppers, causing gold confetti and stars to rain down on our birthday girl.  It was like the New Year’s Day parade, with our special girl at the center.  It was, in a word, magical.

I know, in this age of composting, recycling, and trying to leave a smaller footprint, this party does seem a bit decadent.  However, the clean up was relatively small, with the confetti being the only non-recyclable item. We kept all the decor. The paper goods were compostable.  We save the shredded mylar curtains (they aren’t really made to stand up to much abuse) for future magic wands. Everything else we sent home with the guests, so pretty much everything was repurposed.

All in all, this birthday was one that I’m sure will be preserved for ever as a golden memory.