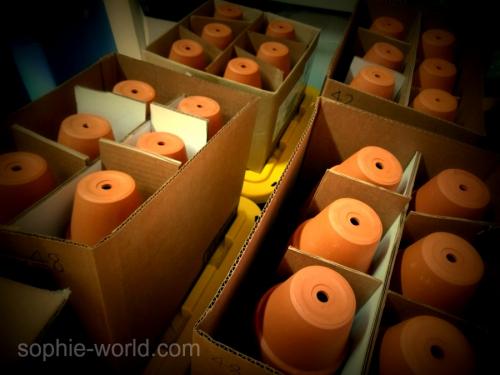 We have become such an impatient nation.  Quite frankly, as much as I praise Amazon, (I admit to being an avid user of Amazon Prime) I curse them.  Nowadays, clients can't seem to grasp that they need to give me time to order supplies.   They can't quite understand that I can't snap my fingers and have hundreds of items overnighted for free.  Case in point, my recent effort trying to procure 1000 flower pots for an upcoming corporate event.

Of course, 1000 terracotta flower pots can be purchased from a wholesaler. That's not the problem.  But to have 1000 terracotta pots delivered to one's warehouse one must have a forklift.  Which, sadly, I do not.  Trust me, after exhausting numerous hours trying to track down a company that would break the order into manageable boxes, I was forced to conclude that I was going to have to do it the old-fashioned way - retail.

Buying retail was not the end of the world. I had budgeted accordingly, and I didn't really mind having to go and pick the items up. The issue was finding enough stock at local stores.  Mind you, I did go into my local Lowes and try to order them. "No Can Do", I was told.  Crazy, right?  You'd think they would like a nice thousand dollar order. But no, they don't work that way.  I was forced to venture into the world of the "order online, pick up in store by the end of the day".  Which, after having spent an entire week existing in internet limbo, I have decided is actually a black hole that sucks the very life out of each person who enters. 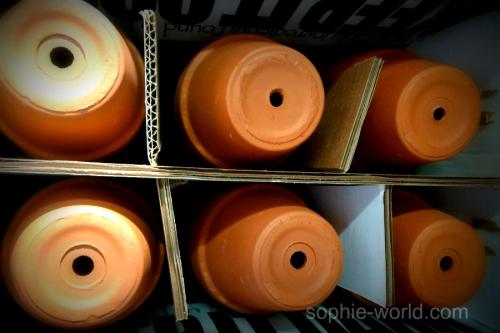 Here's how my saga unfolded:

After being turned down by Lowes I turned to Home Depot.  I was informed by their headquarters that the best way to handle my transaction was to order online.  This seemed easy enough.  Online I was given a link to all of the stores within a 50-mile radius along with their stock on hand.  "Okay", I thought,  "this I can handle".  I could get 450 from Colma, 250 from Daly City, 150 from San Bruno, and 150 from Sacramento (I was heading there to do Sac and Co anyway, so it was no biggie).

Lazily, I place my order and then waited for the e-mail telling me I could come to pick up my stuff.  That was my first mistake.  Evidently, it can take upwards of 1 to 2 days for the locations to even consider pulling the items. So much for that illusion of placing an order then heading out the door to find a happy sales associate brandishing your box of prepaid goods.  When I actually did get an e-mail, it told me my order had been canceled due to a credit card glitch.  This led to me calling my credit card company where I was informed that because they had received 4 orders in a row from Home Depot they were suspicious and flagged the card.

Lesson number one - if you are ordering from more than one location it's not really one order, even though you pay the total as one.  This will raise suspicion with your credit card company, so you need to give them a heads up ahead of time.

After half an hour on the phone with my credit card company they released all holds on Home Depot purchases (keep this little nugget of info in your memory).  I then spent the next 45 minutes (I swear, this is no exaggeration) on the phone with a lovely Home Depot rep named Barbara, who helped me re-order my first order. Remember that promise about how this was supposed to be easy and save time?  Thank goodness I didn't have an event on this day!  Once again I waited for an e-mail.  By this time I was beginning to feel like one of those gals waiting on a text from that cute guy she met a few days ago...as the hours dragged on to days I was beginning to feel like I'd been stood up. 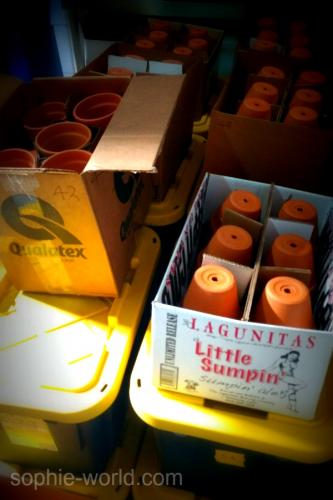 Finally, two days later, I received an e-mail from one of the stores saying my order was ready.  Whoo hoo!  I was on my way!  The ball was rolling!  I loaded my truck with empty boxes and headed to San Bruno, where I was greeted by Dwayne, a lovely fella who helped me go through all the pots, making sure to take an accounting of those that were chipped and crediting those back to my card.  I left there with a spring in my step and a smile on my face.  I had 145 pots, only 855 more to go.  I was envisioning multiple e-mails in my mailbox upon my return to the office. I was certain that this first order was just the gateway to my own personal terracotta highway....WRONG!

About 6:00 that night I received my notice from Colma. Off I went.  Here's where I start to lose heart.  Upon arriving at the Colma store I was informed that my 450 pots could not be processed, even though they were sitting right there in plain view. They couldn't find my order in the system.  I presented the man with my freshly printed e-mail stating that my order was ready, to which he scratched his head and tried repeatedly to coerce the computer into accepting my existence.  45 minutes later the flustered clerk finally released the items to me. 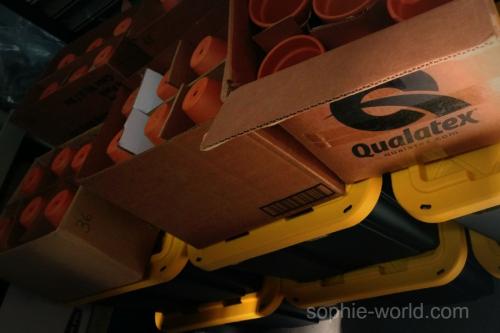 It took another 2 days for the Sacramento order to appear. Just in time for our visit to Sac and Co.  However, there was something else interesting in my mailbox.  Remember when I mentioned credit card fraud and "releasing" all Home Depot transactions?  Welp, you guessed it.  Someone actually used my card to buy a dog door and an over-the-toilet shelf unit from Home Depot!  I have the shipping receipt in my e-mail to prove it.   So you guessed it...I ended up on the phone with my credit card company...again...this time having to cancel my card.  Then I spent another half an hour on the phone with Home Depot explaining the breach. And yes, before you ask, that did lead to further delays with the Sacramento and Daly City orders.

I won't go into the details of how long it took each employee to locate the remaining 400 flower pots, but rest assured I could have read War and Peace by the time they were located.  However, success was ultimately mine. I have 1000 flower pots, give or take a few that chipped during transport.

Remember those 450 pots in Colma? Evidently they are sitting in the store waiting for me to pick them up.  I've received 4 e-mails telling me so. It's on my to-do list to call Home Depot again and explain that I already have them in hand.

All in all I ended up spending a full week dealing with Home Depot and my credit card company.  I realize now, what I should have done is just gone to the stores and hand-picked the items myself. It would have saved me time, money, and aggravation.

It's always good to come away with a nugget of knowledge from these experiences; so what can I conclude from this never-ending saga?

This order online, pick up in the store isn't really made for large orders...or....maybe I just need to get a forklift.