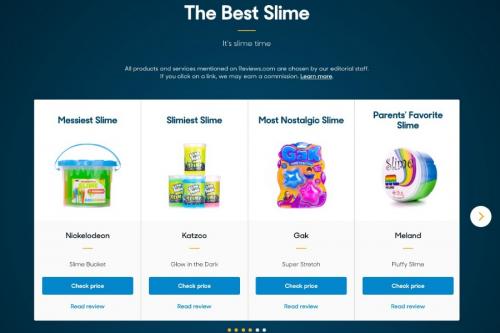 When I was a kid, slime came in a little plastic trash can.  It was this strange, viscous substance, with an iridescent quality, that quite frankly smelled like petroleum jelly.  We loved it, but it was just one of many toys on the market.  Fast forward to the early 80's when Nickelodeon started pouring it over everyone from game contestant's to celebrity's heads.  It became cool to get slimed.

However, the slime craze, as I call it, didn't really come into existence until 2017 - when for some reason, it became a YouTube sensation.  Suddenly everyone was making slime.  So many people in fact, that you couldn't find Elmer's glue on any store shelf, let alone Amazon.  There was a Elmer's glue shortage for a short while.  Young entrepreneurs started selling their slimy wares at schools, on street corners, and Etsy. It became such a staple in so many households that many parents began banning it.

Unlike other trends, like say duct tape and rainbow looms, the slime craze is still going strong.

If you are a parent who wants to stay on-trend but doesn't know where to begin, the good folks over at reviews.com have a super informative post about all things gicky, gacky, and sticky.  The post breaks slime into 6 categories: Messiest, Slimiest, Juciest, Most Nostalgic, Parent's Pick, and Best Travel Slime.

The article itself if chock full of great facts including the actual science behind what makes slime....slime.  There's a lot of really valuable information shared in this post.

So whether you are a novice trying to impress the young ones in your life, or a person who is actually intrigued by this whole phenomenon, this is a great place to start your research.  Here you will find out important things, like cost, mess factor, and points to consider when buying the product.

If you are in the market for slime, I can't recommend a better site.  And remember, once you do bring home that slime it's going to get everywhere.  So make sure you know the secret to cleaning it from your carpets, car, furniture, walls, clothes and pets....Vinegar.  It cleans up slime like nobody's business.  Somehow it breaks down the chemical compound and even removes color.  Take my word and purchase a bottle or two..it's slime's Kryptonite.